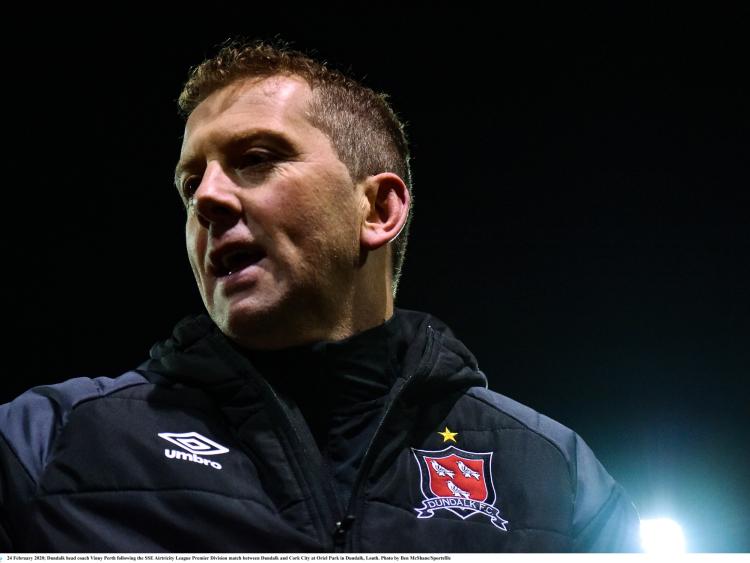 Vinny Perth is playing down the importance of Friday night’s SSE Airtricity League match between Dundalk FC and Shamrock Rovers, insisting that the top-of-the-table clash is “just another game”.

Vinny Perth is playing down the importance of Friday night’s SSE Airtricity League match between Dundalk FC and Shamrock Rovers, insisting that the top-of-the-table clash is “just another game”.

After playing three fixtures, the top-two from last season are tied with each other on nine points at the summit, but the Dundalk head coach reckons it’s far too early to be branding it a ‘massive game.’

“It’s just the next game, it’s the same three points you get [for every game],” said Perth.

“We’ve been behind [points-wise] and we’ve still gone on to win leagues and we’ve been ahead and different things would happen, it’s just another three points.”

Perennial slow-starters in the past, Dundalk have achieved maximum points so far this term, much to the delight of Perth, who has had to manage without five of his first-team players for the opening three games.

He continued: “I’m really happy with the start. I think we’ve introduced some good young players into the squad. We had a big injury crisis last year and we sort of have one now, but luckily enough, we’ve fixed some of the stuff in our squad from last year.

“We don’t have the biggest squad despite what people would tell you, so full credit to the players that are playing. Six points over a weekend is very difficult in this league.”

Georgie Kelly, who missed the first three matches, is in line to make his first appearance of the season following his recovery from a back problem, while Patrick McEleney and Darragh Leahy are classified as doubtful.

However, John Mountney, Seán Murray and Stefan Colovic are the only definite absentees for The Lilywhites.