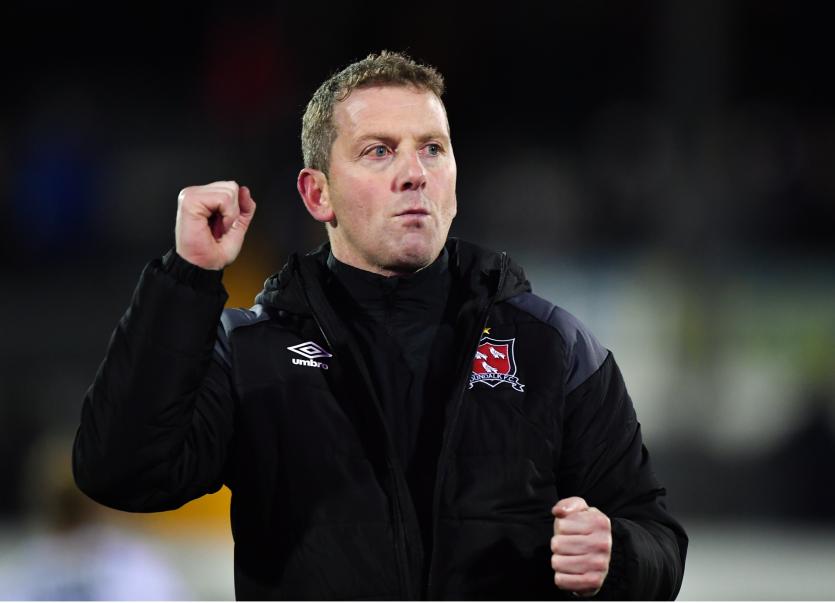 Dundalk FC manager Vinny Perth is not getting carried away with his side’s current run of form, which has seen them take maximum points from their first three league fixtures. (Pic: Sportsfile)

Dundalk FC manager Vinny Perth is not getting carried away with his side’s current run of form, which has seen them take maximum points from their first three SSE Airtricity League fixtures.

The Lilywhites cruised to a third consecutive win against Cork City at a bitter-cold Oriel Park last night, with Michael Duffy, Patrick Hoban and Jordan Flores all getting themselves on the scoresheet.

“If you win any game 3-0 then you’ve got to be happy,” Perth told local media afterwards.

“There’s still that little bit of rivalry there. We could have won by more. We’ve had a huge amount of crosses into the box, a huge amount of possession and probably disappointed we haven’t scored more. We’re getting used to packed defences here and we’ve had to deal with one there tonight.”

In what was a rather subdued atmosphere at Oriel, the crowd were lifted off their feet in the 66th minute when Flores unleashed a superb shot from outside the box and into the top left-hand corner.

“We’ve seen that down in Waterford last year, a goal that doesn’t get a huge amount of credit, but it was an outstanding goal and he’s gone and done it again tonight. He has that in his game.”

With nine points from a possible nine, Dundalk are four points better off at this stage than they were in each of the last two seasons, but Perth insists that they will need to again exceed the 80-point mark if they are to claim a sixth title in seven years come the end of October.

“We’re happy with where we stand. We’re going to have to break 80 points to win the league so we’ve got a long way to go to get where we need to, so it’s just another box ticked.”