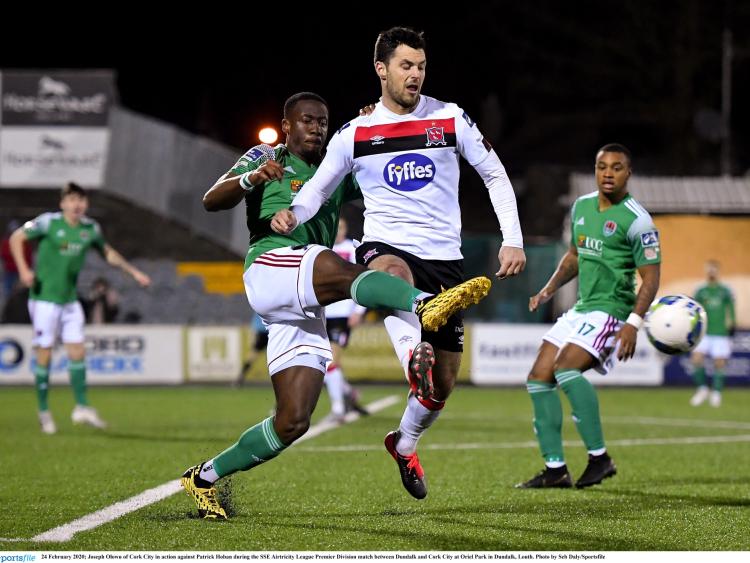 Dundalk FC maintained their 100 percent record in this season’s SSE Airtricity League, courtesy of an easy 3-0 win over a toothless Cork City side tonight at Oriel Park.

Goals from Michael Duffy, Patrick Hoban and Jordan Flores made sure that The Lilywhites kept up the pace with Shamrock Rovers, who they now face in a crunch-match at Tallaght Stadium on Friday.

Vinny Perth, who was somewhat critical of the media in his programme notes, made three alterations from Friday night’s hard-fought 2-1 win over Shelbourne at Tolka Park, with Daniel Cleary, Darragh Leahy and Daniel Kelly all taking their place in the starting line-up for the hosts.

Cork made one change, as Beineón O’Brien-Whitmarsh came in for the suspended Deshane Dalling. 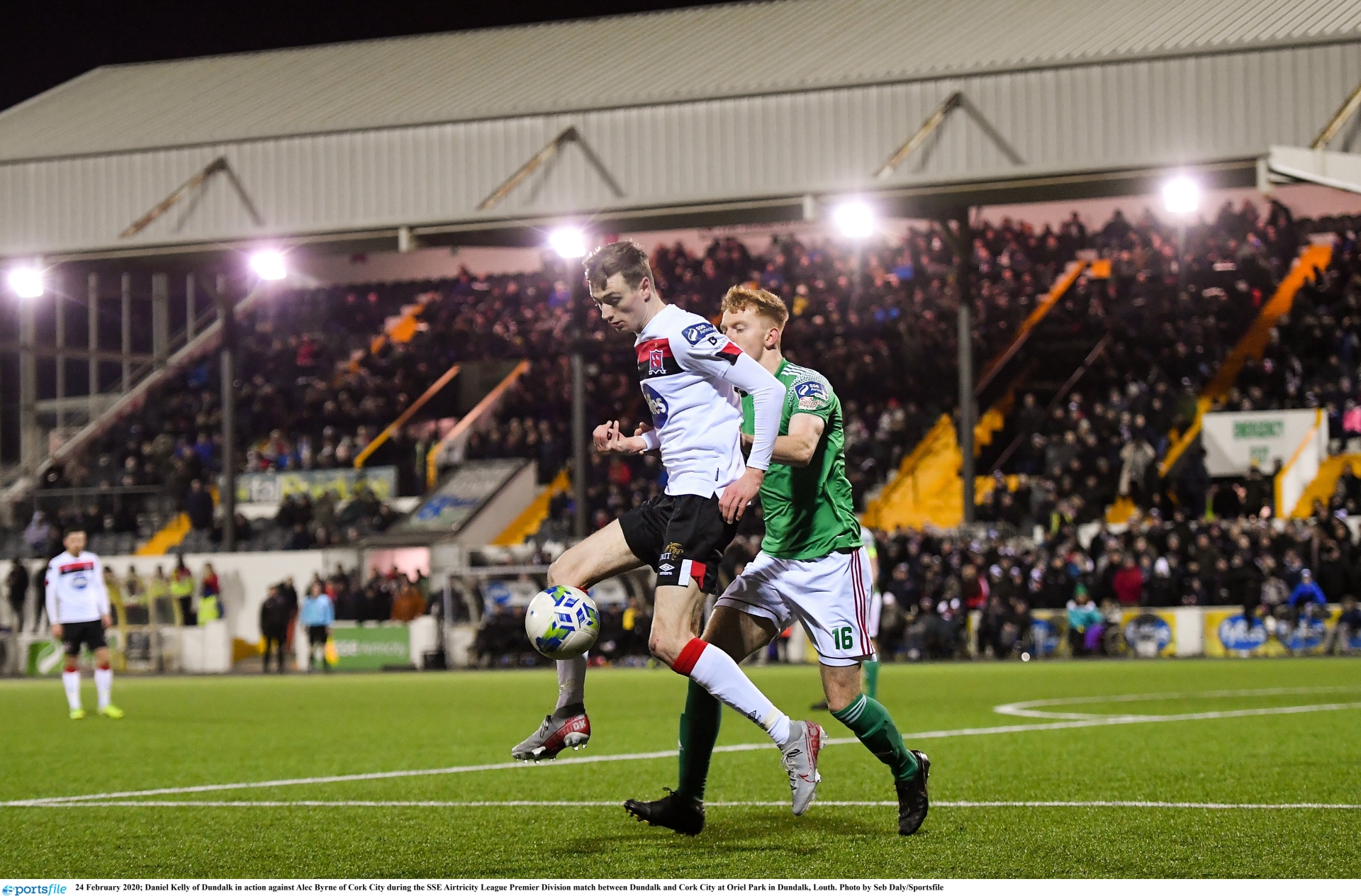 It was largely one-way traffic and the hosts were in complete control of this game right from the get-go. They could have gone ahead inside the opening 50 seconds, when Hoban played in Kelly, whose first touch was just a tad too heavy in his attempts to round Liam Bossin, who was in goal for Cork.

Dundalk continued to press and Hoban, via Cleary’s diagonal ball, got the better of Joseph Oluwu and headed straight into the arms of Bossin. That particular effort came just before Duffy’s shot from outside the box was gathered at the second attempt by the unconvincing Cork netminder.

Perth’s side took a deserved lead inside 16 minutes when the completely unmarked Duffy hit a low volley first-time past the stationary Bossin following a good cross on the right from the lively Kelly.

The game, as a contest, stagnated after that goal, as the champions entered a state of cruise-control.

They should have doubled their advantage three minutes before the break though, when another cross from Kelly was met by Cleary, who somehow diverted his free header over from close-range.

The second period was much the same as Cork sat back, merely trying to contain Dundalk. Six minutes after the restart, Bossin punched away a headed effort from Seán Hoare, who was making his 75th league appearance for the club, with Hoban then volleying over from the resulting corner. 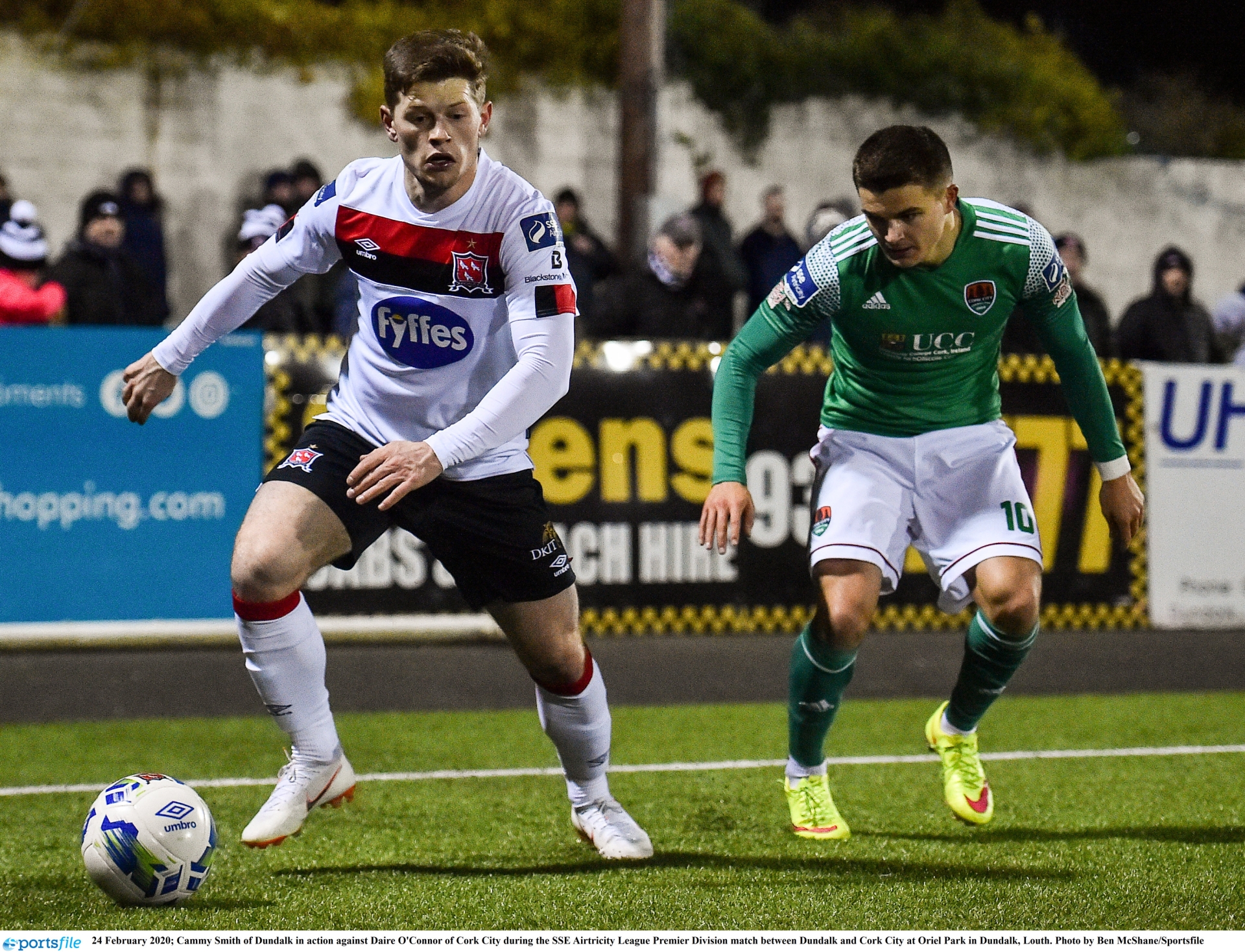 A lovely move from Dundalk saw the scampering Seán Gannon effortlessly take it beyond Ronan Hurley, but the subsequent cross from Kelly was crucially diverted over by Cork defender Olowu.

Just after that, Hurley was penalised for a foul inside the box on Kelly, who was played in by Hoban, who then confidentially dispatched the resulting spot-kick to all but seal the points on 63 minutes.

Dundalk put the icing on the cake just three minutes later and what a way it was to do so. Hoban’s pass found Flores, who unleashed an absolutely unstoppable shot from distance into the top corner.

The finger could hardly have been pointed at Bossin for that particular screamer, but the Cork stopper endured another difficult night just three days after shipping six against Shamrock Rovers.

That said, he saved well with his feet to deny Duffy a second goal in what was now a damage-limitation exercise for Neale Fenn’s young team, who are still yet to find the net this season.

Kelly had a couple of efforts late on, but The Lilywhites ultimately had to settle for just the three goals. Three wins from three now – not at all a bad return for Perth’s perennial slow-starters.