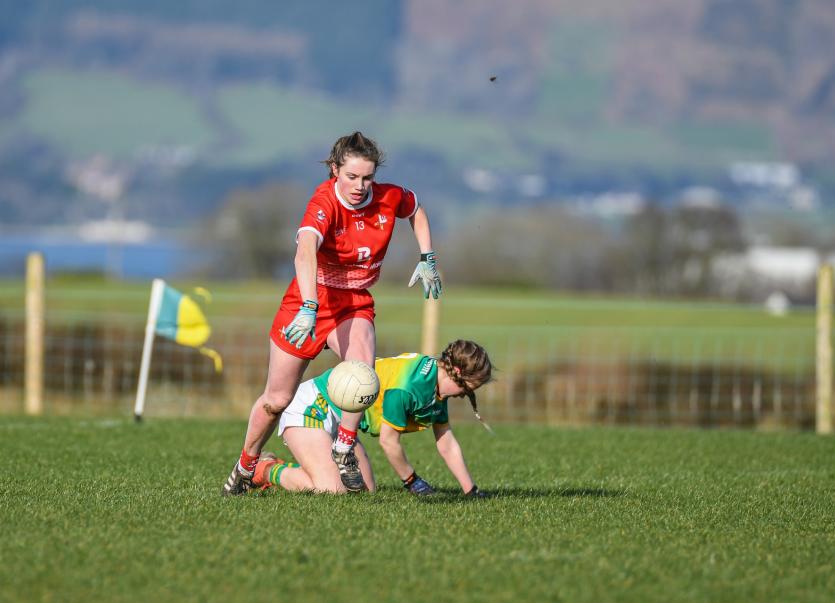 Backed by the breeze during the opening period, Louth set in place the foundations for the triumph, taking a 1-10 to 1-4 lead to the interval with Eimear Byrne finding the net for the winners.

“We are delighted with the result,” said Freeman after the game.

“Leitrim were tough opponents and we did well to get the result, playing some nice football at times; we battled very well and our work-rate was extraordinary.

“We now have a break next weekend, so we will analyse the game and prepare for our next game in Derry.”

The outcome will have been all the more pleasing for the Louth boss considering it came in spite of regulars Shannen McLaughlin and Aoife Russell missing out through injury.

STRONG START
The Reds were fast starters at windy Fr McEvoy Park, a brace apiece from Rice and Byrne handing the hosts a four-point advantage after just six minutes.

But Leitrim, fresh from opening victories against Derry and Antrim, hit back as Vivenne Egan rifled the ball to the back of the Louth net following good approach play. And when Michelle Guckian registered from a free, the sides were level.

Louth, though, moved through the gears thereafter with Rice restoring their lead prior to Byrne crashing against the crossbar in what was a sign of things to come.

Another Rice register preceded Lauren Boyle getting off the mark on her home patch before Rice and captain Aoife Byrne combined to set-up the younger of the Byrne sisters for Louth’s goal, leaving the scoreline reading 1-7 to 1-1 in The Reds’ favour.

Hugh Donnelly’s charges responded via Laura O’Dowd and Michelle Heslin, but with Rice on song at the other end, the winners held a 1-10 to 1-4 half-time cushion.

“We didn’t score enough in the first half while we had the wind,” the teenager said.

“So we did leave a lot of work to be done in the second half. But, despite probably not performing to the best of our ability, we still maintained the intensity throughout the game and had a really good work ethic.”

Leitrim’s hopes of a revival weren’t aided by the yellow card award to goalscorer Egan, yet a bright start to the second period ensured the gap was reduced to just three, impressive Guckian finding her range.

Rice and Leah Fox then exchanged points, while Leitrim were once again thankful for the woodwork’s intervention as the former unleashed an effort at goal.

Three remained the difference entering stoppage time, when Aibhe Clancy cut the gap further, only for Rice and Rebecca Carr to hand Louth an unassailable four-point advantage which Leitrim, try as they did with Muireann Devanney rattling the net, were never going to reel in.

“Our hard-working mentality could be seen really clearly today, from one to 15, and I think that’s a really good trait for us, as a team, to have, especially when you’re looking to really compete for the league this year.”