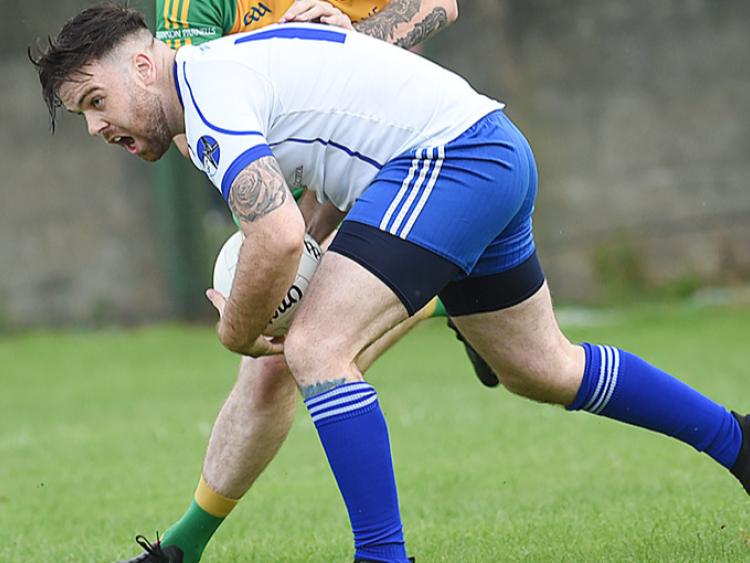 Shane Rogers inspired Naomh Malachi to victory over Dowdallshill in Group B of the Kevin Mullen Shield at St. Brigid’s Park on Saturday afternoon.

The Courtbane man finished with a personal tally of 1-8 as his side bounced back from their midweek defeat at the hands of Na Piarsaigh to get their season up and running.

Mals were on top for much of the game and a goal from Emmet Mullen helped them lead 1-8 to 0-4 at half-time.

Further goals from Rogers and Mark Meegan put the seal on a deserved win for the visitors. Dowdallshill enjoyed some good moments in the second half and found the net through Noel Finnegan and Darren Rogers but they were unable to seriously threaten their opponents.

Lannléire and John Mitchel’s shared the points in their Kevin Mullen Group B encounter at Darver on Saturday evening with Mark Dunne scoring a last-gasp point from a penalty.

The Ballybailie men looked to be heading for victory, despite the Dunleer side making a bright start, finding the net through Cillian Gregory inside eight minutes; while a second from Paul Callan on 22 minutes had them leading by 2-1 to 0-4 at half-time.

Mitchel’s hit back at the start of the second half with a goal from Andrew Bingham and boosted by that score they went on to claim the lead. However, Lannléire kept in touch with three points from sub Bob Murphy before Dunne landed the late equaliser.

Emmets played with the advantage of the elements in the opening period and had early scores from Damien Grimes and Keelan O’Neill, but Tones kept in touch with scores from Emmet Judge and Darren Weldon.

However, the closing stages of the half saw Ronan Grufferty land four points to see his side take a 0-6 to 0-4 lead into the break.

Tones had the wind in the second half and worked to get the back on terms at seven points apiece. It was looking good for the Drogheda side at that stage, but Emmets regained the initiative when O’Neill scored the first goal of the game.

However, that would be their last score as they squandered a lot of attacking chances. Tones took advantage by mounting two late breaks which resulted in the goal for Cudden and the winning point for Judge.