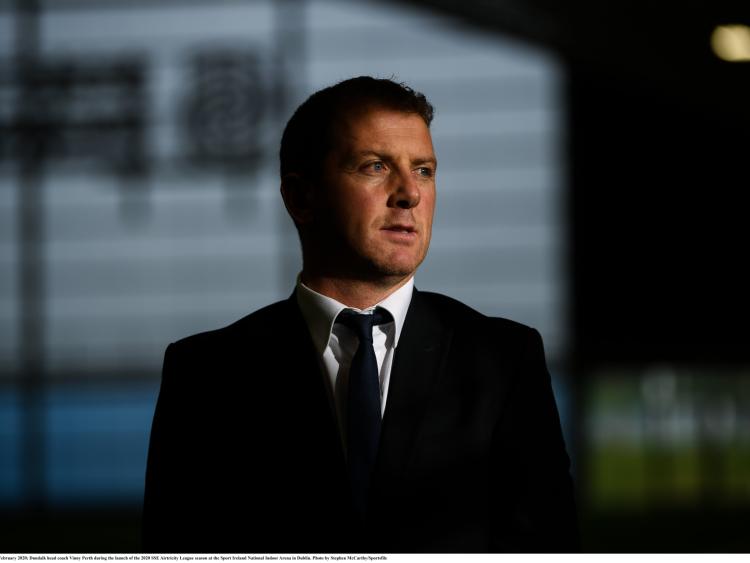 Dundalk FC manager Vinny Perth has said he’s not driven by the prospect of winning the treble, insisting that he is prioritising the SSE Airtricity League and European football. (Pic: Sportsfile)

Dundalk FC manager Vinny Perth has said he’s not driven by the prospect of winning the treble, insisting that he is prioritising the SSE Airtricity League and European football.

The Lilywhites were, last year, just a penalty shoot-out away, in the FAI Cup final, from becoming the first League of Ireland team to win the domestic three-timer since Derry City achieved the feat in 1989.

However, Perth insists, despite the hurt he still feels over that defeat by Shamrock Rovers, that Dundalk’s focus will be on retaining the League of Ireland, as well as an extended run on the continent.

“It hurts me a huge amount because, as a manager, I’ll probably never get the opportunity to win the treble or, certainly, the domestic clean-sweep ever again,” he explained to The Democrat.

“Last year, we set our goal around the treble. This year, it’s not one of our goals. If it happens, great, and we certainly respect the FAI Cup to the inch of its life, it’s a trophy close to my heart.

“Our goals are, first and foremost, to be ready to win league matches and peak around Europe time. That’s something we need to improve on after the last couple of years.”

A possible reason for this change of priorities is the fact that Dundalk are operating with a smaller squad than that of last season, with 22 senior players signed up to the team at the time of writing.

However, several U19 stars, including Val Adedokun, Mark Hanratty and Ronan Kilkenny, have impressed when used in pre-season, with Perth open to the possibility of involving more youth players as part of his plans going forward. But he outlined the difficulties he faces within underage structures.

“Our underage set-up is probably not given the same floodlights as others because it’s a lot smaller and it works off smaller numbers,” he added.

“The difficulty of getting top players up to Dundalk is difficult and we can’t compete with the hotbeds of Irish soccer in terms of Dublin, but we’ve a lot of young players coming through.

“We’ve put a lot of young players on professional contracts. We are building towards the future in that sense, I do believe in bringing young players through. People would say, was (Jamie) McGrath a young player? Yes, he was at 21 years of age. Daniel Kelly, two-and-a-half-years ago, was playing non-league football and he scored 16 goals last season competitively for our first-team.

“The squad isn’t as full as it was last year, the numbers are slightly smaller, but it’s equally strong. Our fitness levels are higher than they were this time last year because of the way we’re set-up.”

Dundalk completed their pre-season programme last Tuesday night with a 1-0 defeat to Longford Town. Included in the Lilywhites line-up for that game was winger Josh Gatt, who has been capped twice by the United States international team, and most recently played in the Austrian Bundesliga.

Gatt, who has, in the past, had issues with injuries, played 70 minutes as a trialist before going off with a bruised knee, with Perth still running the rule over the 28-year-old that won three league championships in Norway with Molde FK, playing two of those seasons under Ole Gunnar Solskjaer.

“We don’t trial players at the club because we’ve seen them enough, that we don’t need to trial them, we wanted to see could we suit each other.

“To be honest, that will be a slow-burner, he’s not under contract, so it’s not something I expect to happen this month.”