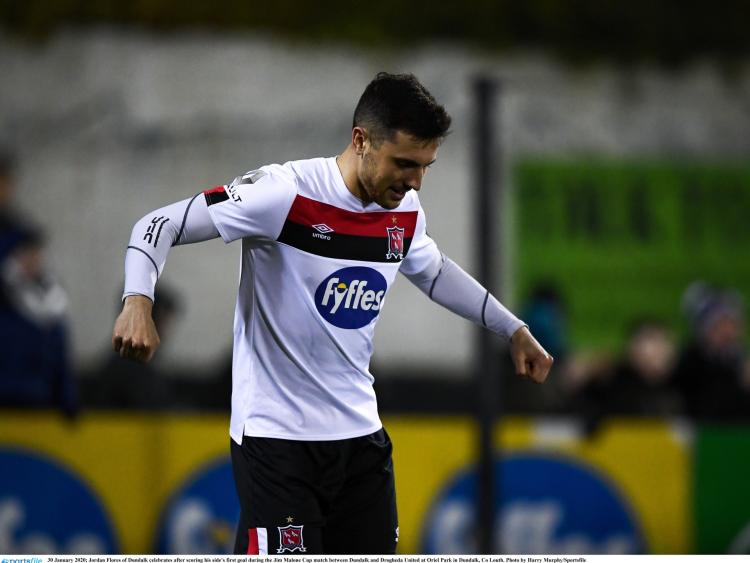 Vinny Perth says the return to full fitness of Jordan Flores feels like the club have a new signing on their hands. (Pic: Sportsfile)

Vinny Perth says the return to full fitness of Jordan Flores feels like the club have a new signing on their hands.

The midfielder scored the opening goal in Thursday night’s Jim Malone Cup defeat of Drogheda United and has generally caught the eye during pre-season.

Wigan-born Flores penned a two-year deal with The Lilywhites ahead of last term, but injury disrupted his impact in 2019, yet the Dundalk manager is confident a big season awaits the 24-year-old.

“Jordan’s return makes it feel like we have a new option,” Perth told dundalkfc.com.

“He has unbelievable quality and we’ve always regarded him highly at the club. Whenever he has been fit, he’s been in and around the team and this is the fittest he looks.

“Touch wood it’s a big season for him. He had a lot of injuries last season, but he has been brilliant in pre-season and has really hit the ground running.

“He was able to work so hard in November and December because he didn’t finish last season and we’re really happy with where he is.”

Meanwhile, the club has announced the signing of 16-year-old Val Adedokun on professional terms.

The young Dubliner has been with Dundalk’s academy since 2017, in which time he made his Ireland international debut at U15 level.

“He is a young player who has been with us for a couple of years now and it shows you the value of our academy set up,” Perth said of Adedokun’s deal.