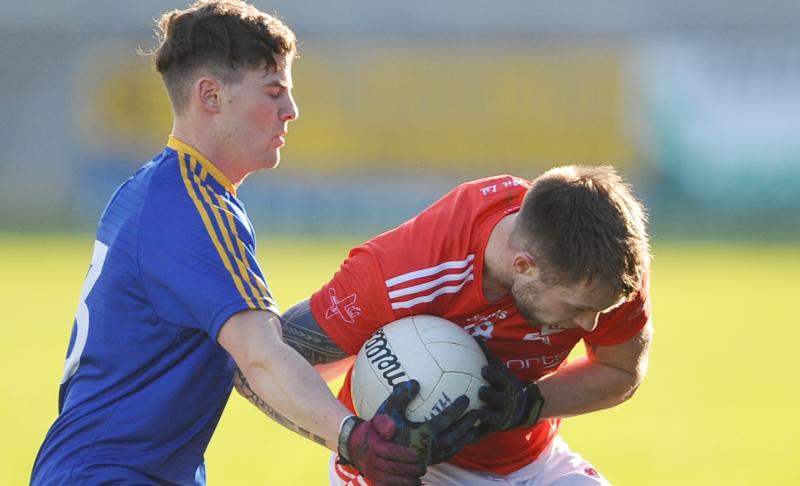 Division Three isn’t conducive to slow starting teams and with Louth yet to escape their block, Wayne Kierans’ team are already lagging behind in a league where they’re one of just two sides still to get off the mark.

Sunday’s defeat by Longford was miserable, as The Reds failed to raise any sort of challenge. The hosts were by no means impressive, but had far too much guile and craft for disappointing Louth.

The sides’ entire outlook were in contrast. Longford’s play was far more effective and direct in the sense that Dessie Reynolds and Rian Brady were omnipresent outlets, and a lion’s share of the winners’ scores involved the lively pair.

Louth, on the other hand, laboured over and back the field, employing a style which must have had Ryan Burns and Declan Byrne, in the inside line, gritting their teeth in frustration.

Even when chasing the affair, amid the closing 10 minutes, substitute Conor Grimes raced towards the corner flag to gather possession, passing out to Oisín Murray, who in turn kicked to a static team-mate in the centre of the field. In two passes, The Reds had retreated 60 metres or more.

It’s a lethargic way of playing that simply will not breach defences often enough to lift Louth away from trouble in a viciously competitive league, one much stronger than the tier the visitors went close to securing promotion from 12 months ago.

Kierans accepted his outfit were pedestrian in phases of play, although he made the point that supply channels to the danger zone aren’t always available.

Byrne was a hugely effective option in the recent O’Byrne Cup defeat by Westmeath, showing from the square and calling - before scoring from - marks aplenty. This ploy was starkly non-existent in the midlands, though.

“Those little passing channels aren’t there,” Kierans told The Democrat, in response.

“There were a couple of guys in front of him and the movement has to be very sweet; a different type of movement than just direct little pop balls. 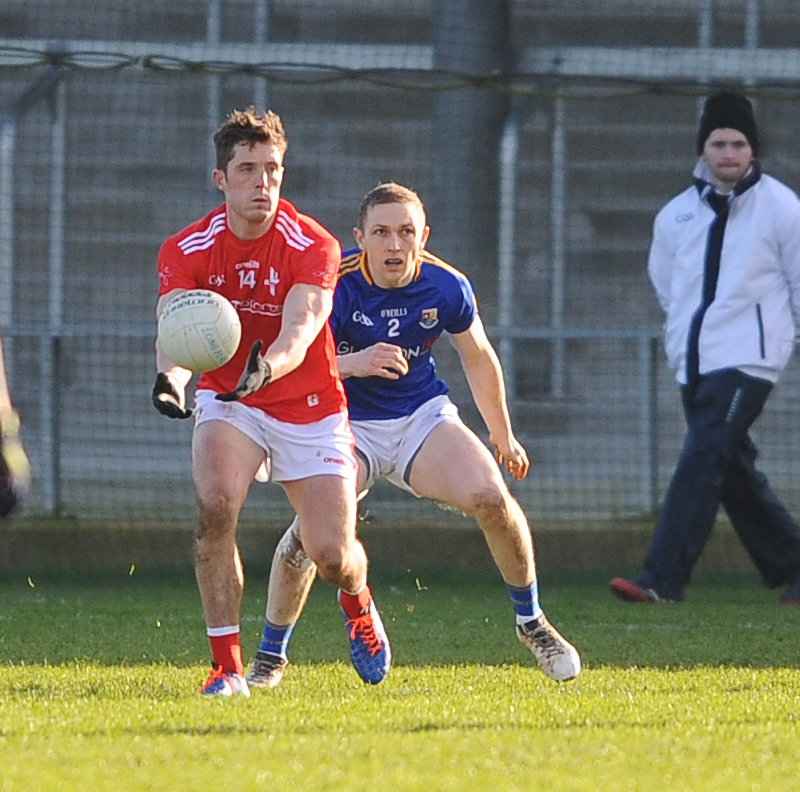 “There’s other areas of the game I was disappointed with. Every free-kick we had, where we’d a couple of seconds to make a decision, every single one went in a negative angle, which is something we’ll look at. That can be improved without moving it through the lines.

“It was our set-plays I was disappointed with. We should be trying to penetrate and go that bit longer. There is a balance with patience, but we scored a goal in the first half with patience football. We coughed up a lot of attacks when we weren’t patient.

“It’s not to everybody’s liking, but in the possession-based game it’s very important to get it right. At this level you can’t be coughing up the ball.”

ROOKIES RAMPAGED
For Louth to have been in a competitive position entering the dying embers was a minor miracle, given the runaround the team’s youthful backline got during the first half. Twice Craig Lynch had to pull off acrobatic stops at a time where The Wee County were in a spin field-over.

Burns began the game sprightly and knocked over a nice point, having converted from a narrow-angled free shortly beforehand, but he was feeding off scraps as Longford, with Darren Gallagher and Kevin Diffley dominating the midfield exchanges, couriered the ball into a crew of dangerous attackers.

The gap was six, 0-8 to two, and ought to have been more when a slick Louth passing sequence split the home rear-guard for the first and only meaningful time. Byrne slipped in Conall McKeever, who retired injured not long after, and the Clan na Gael man squared for league debutant Gerry Garland to palm into a gaping goal. 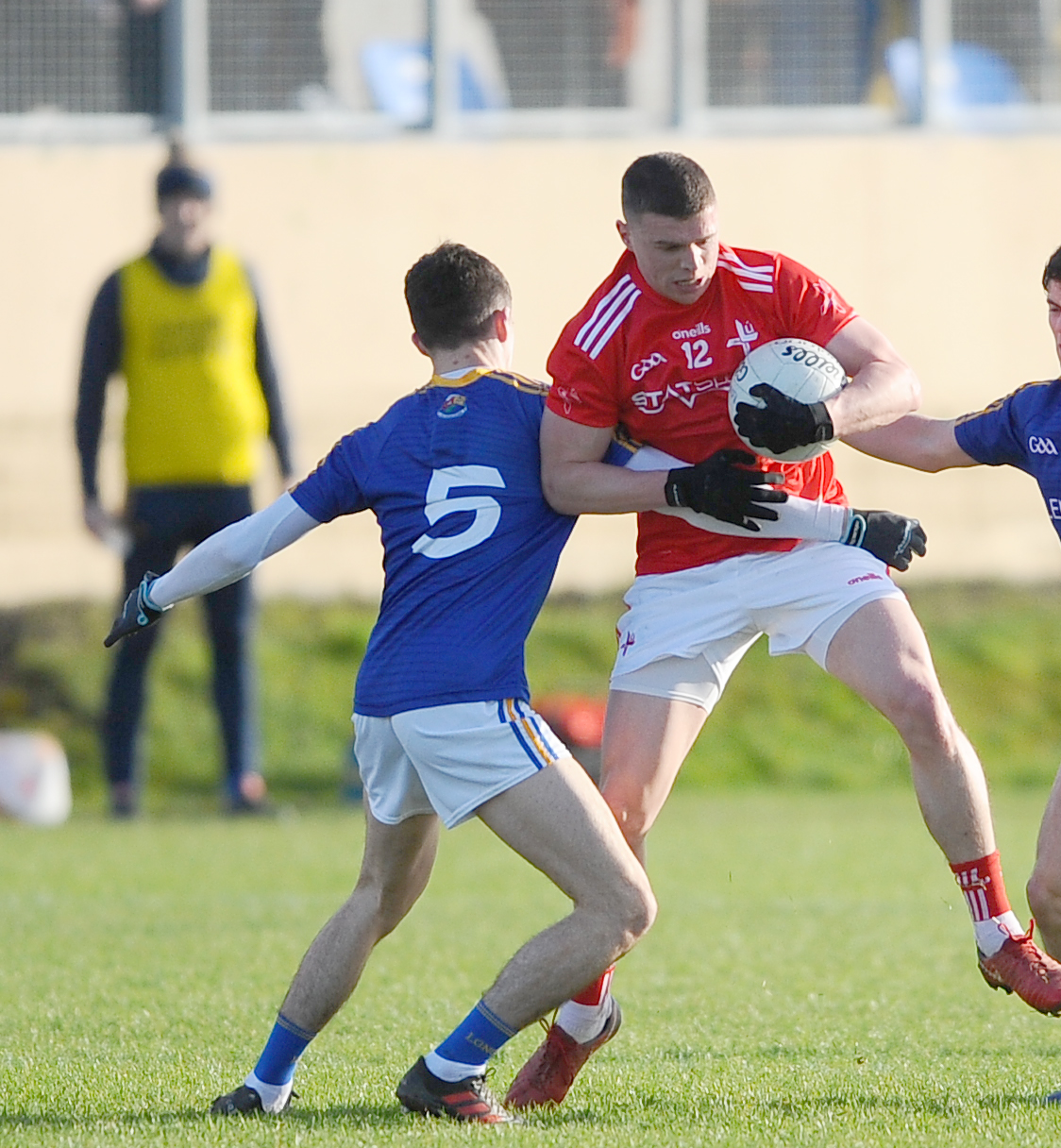 It was a kickless major, however, as Louth continued to waltz through the motions, allowing Reynolds however much space he required to land a Longford reply within 30 seconds. Whatever you can do I can do better being the theme.

Despite trailing by just three at the interval, 0-9 to 1-3, there was no way back, even though there was a second half improvement.

“I didn’t think we really got going,” Kierans surmised. “We got a really good goal in the first half and didn’t really kick on from that; I thought they got a lot of scores really cheaply.

True, another major, the one required, was never going to come, even when the playing number was reduced to 14 apiece, after second yellows for Eoghan Callaghan (Louth) and Michael Quinn (Longford).

Captain Bevan Duffy and brother Eoghan were at the heart of Louth’s late surge, while another reserve, Paul Mathews, kicked a point. But the exercise always held a forlorn look. Longford were just playing out time, Louth too.