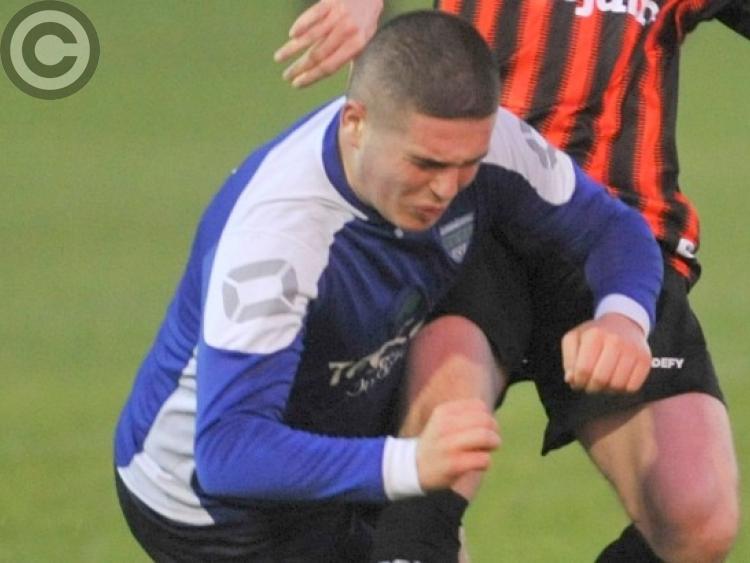 Paddy Nicholson bagged a brace for The Seasiders with Oran O’Hanlon and Seán Maguire also getting on the scoresheet. (Pic: Aidan Dullaghan)

Taylor Murphy gave Quay Celtic a tonic start on Friday night, with a snapshot in a crowded box with just a minute played.

The home side got no time to savour their lead, though, as a tremendous shot from outside the penalty area by Cameron Etherington whizzed past goalkeeper Cillian Rice to level the game, with just two minutes on the clock.

Midway through the half, Joe Kirk pounced on a spilled save to put Carrick into a lead they held until half-time.

Michael Keenan stretched Carrick’s advantage to 3-1 just after Celtic failed to score from a penalty kick.

Before the end, Caoimhín Dignam closed the gap to just a single score, but despite intense pressure from the Point Road side, Carrick held on for three valuable, away points.

Ardee Celtic stretched their unbeaten run to four games with this hard-fought draw with Termonfeckin in Ardee.

Trevor Farrell was the home side’s scorer, with Conor Brennan replying for the visitors.

This point sent The Deesiders four points clear at the top of the table and provided Termonfeckin with another fine result, after their 5-2 victory over Bellurgan a week beforehand.

Rock Celtic got back to winning ways, after two heavy away defeats, with a commanding win over The Saints in the Friary Field.

Paddy Nicholson bagged a brace for The Seasiders with Oran O’Hanlon and Seán Maguire also getting on the scoresheet.

Although 3-0 down at the break The Doms spurned some great chances in the second half to get back into the game.