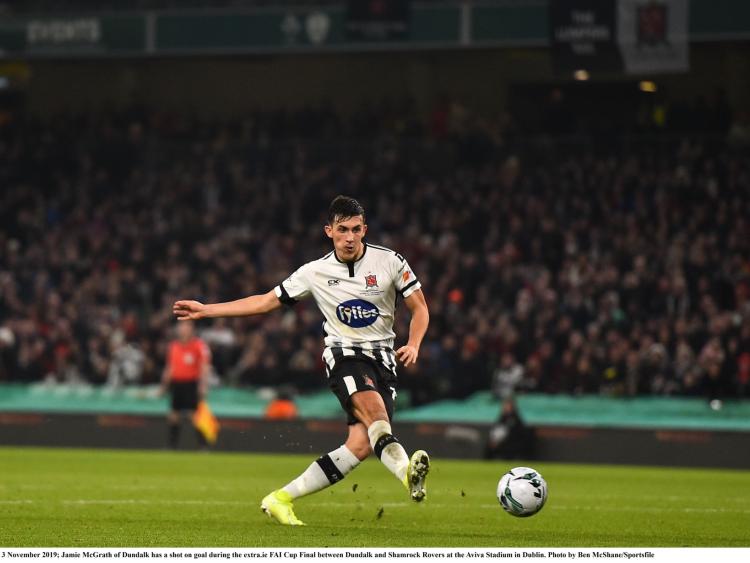 Another year has seen another valuable player depart Oriel Park. This time it was to be Jamie McGrath, who, as expected, departed Dundalk FC for pastures new. (Pic: Sportsfile)

Another year has seen another valuable player depart Oriel Park. This time it was to be Jamie McGrath, who, as expected, departed Dundalk FC for pastures new.

Despite the club’s best efforts, he was never likely to stay put in all honesty and, by all accounts, had attracted interest from all different angles. However, his final decision turned out to be an underwhelming one, with the Athboy native signing a two-and-a-half-year contract with perennial Scottish strugglers St. Mirren.

For a player of McGrath’s ability and at just 23-years-old, a move to a side currently languishing in 10th place in the Scottish Premiership can hardly be seen as the stuff of dreams, which some quarters would lead you to believe is the case.

The alternative view, seemingly, is that the current Dundalk team is of a better standard than that of St. Mirren, so one might ask, what exactly is it that has attracted him to Scotland when silverware and European football was aplenty back in Ireland?
Partially the reason is this long-standing culture that’s been prominent within the Irish game for as long as anyone can remember.

The mindset for domestic players has always been to eventually earn a move to England or Scotland. McGrath’s performances in 2019 had naturally caught the attention of teams in both leagues, but there was also rumoured to be interest from an unnamed Belgian club.

For me, this brought up the question as to why we don’t see more young Irish players testing their luck in mainland Europe? One would have to think that plying their trade in countries like Belgium or the Netherlands, for example, would nurture talents such as McGrath.

CLICK HERE FOR: 'COMMENT | Dundalk FC's bid to replace Jamie McGrath will be difficult for so many reasons'

You only have to take Jack Byrne, who looked remarkable in the Eredivisie yet struggled with a mediocre Kilmarnock side prior to his move to Shamrock Rovers. The reasons for this are quite simple actually, as it’s difficult for a playmaker like Byrne and McGrath to flourish in an environment or system that doesn’t necessarily encourage attractive football. The latter is likely to encounter these very problems with St. Mirren.

The grass isn’t always greener on the other side, as I’m sure his now former Dundalk team-mates, Patrick Hoban, Andy Boyle and Patrick McEleney, would concur. Those three players, quite understandably at the time, were motivated by the promise of a more secure contract and significantly higher wages.

In recent times, however, Dundalk also find themselves in a position where they can now offer similar long-term deals, so it’s rather difficult to comprehend McGrath’s motivation considering it is highly unlikely that The Buddies have offered him a significant pay rise.

You can only hope that it all works out for him and that he uses the Scottish side as a stepping stone towards bigger and better things, but he’s going to find that extremely difficult you’d imagine.

In my honest view, a move to St. Mirren for a player of McGrath’s quality is a severely underwhelming one.