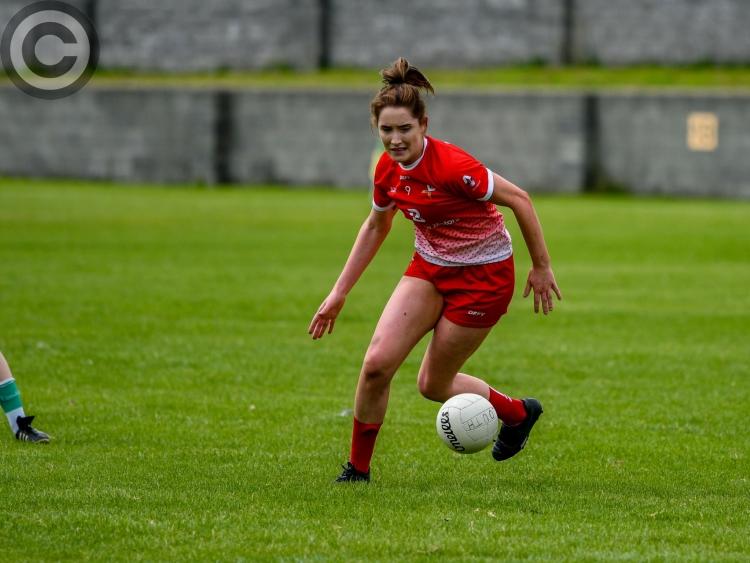 Aoife Byrne is just seven days into what could potentially be the year of her life and there has already been a thrill. (Pic: Warren Matthews)

Aoife Byrne is just seven days into what could potentially be the year of her life and there has already been a thrill.

Due to get married next Christmas, the teacher, who won an All-Ireland medal at midfield last September, is hopeful of helping The Wee County escape the clutches of the National League’s bottom tier after more than a decade.

Meanwhile, the last time the Louth Villager skippered The Reds, in 2017, relegation from the intermediate championship soured the experience in the extreme, and led to her absence from the panel the following year.

Hopes, however, are much higher and the newly installed coaching team, headed by Kildare man Freeman, have set attractively high standards.

“Our first step is to win Division Four,” Byrne, who missed last year’s league semi-final defeat by Antrim through injury, told The Democrat.

“Obviously, then it would be about stepping up a grade in the championship and trying to compete. And sure you never know what might happen if we manage that.

“The new set-up is very professional and well organised.

“We’ve had two challenges already and both games had a competitive edge, which was a good sign as we’ve done quite a bit of training, both in the gym and on the pitch. It should all stand us in good stead moving into the league.”

The Reds open their campaign in Antrim on February 2, a week later than the other six teams who make up an incredibly tight-looking bottom tier. Not that the pre-festive period altogether helped their bid to hit the ground running in less than a month’s time.

Along with the departure of Darren Bishop as boss, there has been a significant turnover in squad members since the 2019 run ended, with star player Kate Flood the most high-profile absentee from the present group. The St. Patrick’s player is, of course, in Australia preparing for the upcoming AFL season with her club, Fremantle, and is likely to miss a significant chunk of the points competition, if not it all.

Several others have stepped away for varying reasons, with Roche Emmets’ Louise Byrne, a star of last term’s senior championship and winner of the club league’s Division Two player of the year award, among the newcomers to the panel.

“The team changes up every year for different reasons,” Byrne added.

“We obviously lost Kate to AFL and a couple of girls went travelling, but that is inevitable; people move on and you can’t expect them to put things like this on hold.

“So we have lots of new girls in the panel, but I have no doubt they will step up to the pace.”

On her own situation, given the engagement and other factors, Byrne admits to considering her future and was even absent for the beginning of Freeman’s reign.

Yet the package of both playing for Louth and alongside sister Eimear was ultimately too attractive to reject, and her return has coincided with her confirmation as captain, with Clan na Gael’s Shannen McLaughlin, another who tasted glory at Croke Park, to act as her deputy.

“I suppose after such a good year it was very hard to walk away,” Byrne said.

“With getting married next Christmas I did question my commitment, but really that was just an excuse.

“We had a very short break, as club football continued after the All-Ireland; I had nearly three weeks off and spent two of them in Orlando and then a family wedding in Edinburgh.

“But even though the break was short, it’s amazing how easy the fitness levels can slip and I missed the first trial or two with the Edinburgh trip, so my first session back was half-drills and half-game based, which was tough...”

No gain without pain, as they say. The skipper has plenty to look forward to over the term to come.