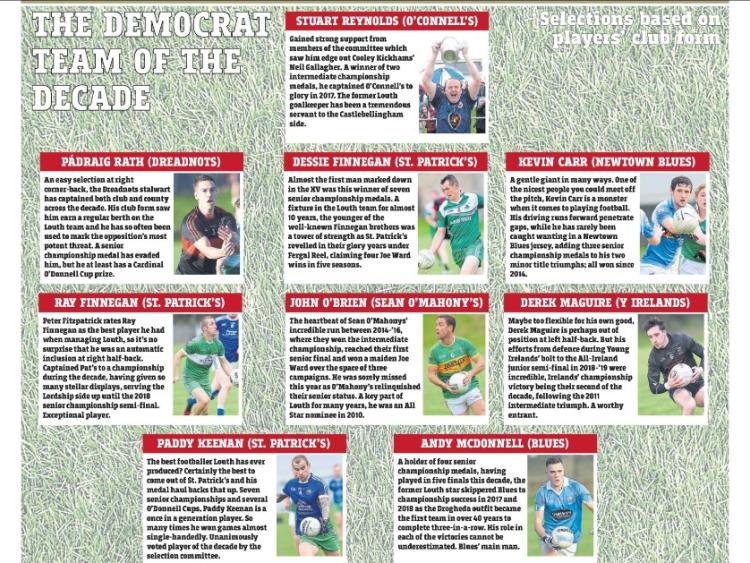 The Dundalk Democrat's Louth GAA team of the decade, as selected by our special panel.

It was never going to be any other way. Pulling out of Donegan’s, Noel Litchfield let go a belch that made your writer think he’d driven out in front of someone. Good job I didn’t, the prince of Tallanstown, Tommy Burns, was sitting in the back seat.

“Mark Brennan,” says Noel. In that moment crashing the car seemed the best way out, until Tommy, possibly fearing for his safety, consoled the sinking feeling by asking who could possibly have been omitted to accommodate one of Mattock Rangers’ finest, Brennan? And so Mr Burns, who has recently been elected Glyde Rangers’ secretary for the 49th successive year, got back to base safely.

Aidan King and Michael Matthews landed on their own steam and as the five of us - The Democrat’s selection committee - took our seats at a reserved table, beside a couple who may have been wondering if they had stepped into an Oireachtas hearing as opposed to taking in some Saturday lunch, the debate began.

Refreshments were the first order of the day and when Mickey was swift to declare, requesting coffee, ‘we must be here for the day’, I thought. But we weren’t and by the time Arthur Kinahan dropped in with his camera to ensure there was photographic evidence of our midday meeting, almost 45 minutes later, 14 of the positions were locked in.

The remaining spot was at right-half forward. There was a list of contenders that was eventually whittled down to two - St. Patricks’ Eamon Carroll and Declan Byrne of St. Mochta’s. The vote was 2-2 - names won’t be mentioned for fear of a Louth Village backlash; safety in numbers, as they say - with the casting input favouring Carroll.

Maybe Tommy isn’t out of danger after all, given he resides closer to Mochta’s territory than any of the rest of us. Pitch forks and fire lights…

The spine of the side picked itself, Stuart Reynolds gaining the majority of support between the sticks, ahead of Neil Gallagher, meaning no Cooley Kickhams were included. Budgie Boyle already reckons I’ve got something against the Fr McEvoy Park club, so he’s almost certain to have a go the next time we meet at a Louth ladies’ game. I’ll have to get my retaliation in first.

The Finnegans, Dessie and Ray, were swiftly entered, minus deliberation, as was John O’Brien at centre-half. “He was nominated for an All Star in 2010, wasn’t he,” Mickey inquired. He was, of course. The best footballer ever to come out of Sean O’Mahony’s, although Willie Crawley may have something to say about that.

Colin Goss entered the fray where No.6 was concerned, but O’Brien was the undisputable choice.

Nepotism was left at the door, it must be added. And sure how could it not considering the panel was made up of men whose clubs have spent chunks of the last decade playing junior football. None of us, bar Tommy, have been subjected to the senior ranks that recently. Not a proud record, it must be admitted.

But back to any potential notion of nod and wink tactics. My auld mate from Dreadnots, Pádraig Rath, was named at No.2 due only to his tremendous service and displays over the years, not because he used to play me on Louth development squads. Thanks all the same, Pop.

On the topic of time spent training in Darver, a former team-mate, Kevin Carr, pipped Alan Page and others to the remaining wing-full berth. A winner of three senior and two minor championship medals since 2014, there is hardly a more decorated defender with so many years still on his side.

Time to fill up the cups at that point, because left-half took a fair bit of toing and froing, before Derek Maguire was settled upon. That the Young Irelands star deserved his place is undoubted, but selecting his position was anything but straight-forward. Owenie Zamboglou was your writer’s pick for No.7, but Noel Litchfield was insistent on Maguire and being a salesman, it didn’t take much arm-twisting to get Aidan King and co onside.

In saying that, Mr King is no pushover and when it came to selecting the full-forward line, he had the three inclusions on the tip of his tongue. There could be no arguing with JP Rooney, Shane Lennon or David Reid getting nods here.

Paddy Keenan and Andy McDonnell were the midfield pairing nominated and written down, before a few selectors rowed in on the side of Tommy Durnin, Aidan pointing out that he has been playing adult football since 2009. Leaving him out was excruciatingly difficult, but it would have meant at the expense of McDonnell, who has won the last three SFC titles with Blues as a centre-fielder.

Tommy Burns’ suggestion that we don’t veer into All Star territory, in making positions for people who wouldn’t otherwise play there, held firm.

Mickey proposed that Colm Judge be included as one of the half-backs earlier in the conversation, considering he has spent time playing as a sweeper, which is not a position within the traditional parameters we were abiding by. So he got a pick at centre-forward, probably in front of his club-mate, Ciarán Downey.

Meanwhile, and rightly so, Mickey made a passionate plea for Páraic Smith and with nobody vocally objecting, rather throwing out the names of Christy Grimes, Adrian Reid and Karl White, the Dreadnots attacker was pencilled in at No.12.

The inside line was the easiest to select, so the allotted time was dedicated to raving about those who failed to make the cut: Reid, Grimes, White, Darren Clarke, Danny O’Connor, Aaron Hoey, Trevor O’Brien, Jim McEneaney and Niall Conlon gaining particular mentions.

Choosing our individual player of the decade took all of about nine seconds, Paddy Keenan gaining unanimous approval. And so we scattered with everybody happy, and prepared to give this another go in 2029.

We may stay out of Louth Village until well into the new year, though.