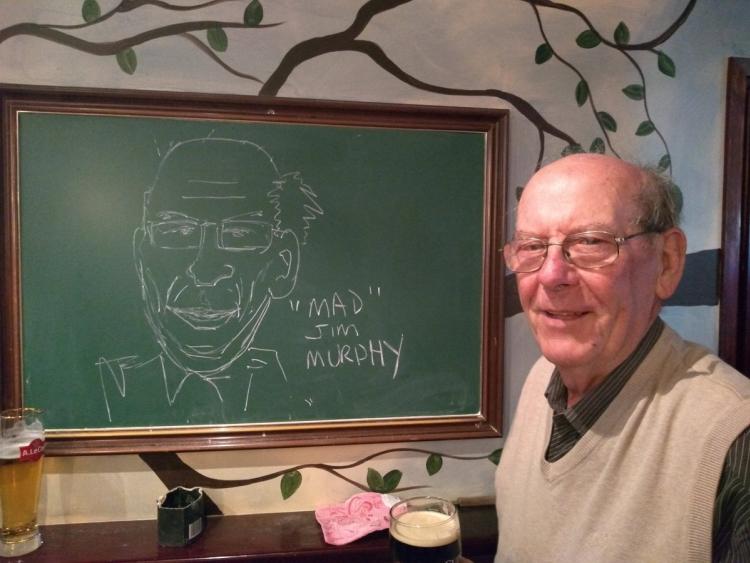 Jim Murphy stands beside Mickey Duffy's drawing of him in a pub in Tallinn, Estonia, ahead of Dundalk FC's Europa League qualifier against Levadia in July 2018.

The 2018 World Cup semi-final meeting of France and Belgium was a drab affair, yet the occasion lives in one’s memory for the circumstances around which your writer viewed the match.

In the company of Jim and Ruairi Murphy, among a vast travelling party, an Irish pub buried deeply in Estonia’s capital, Tallinn, was the vantage point. It was two nights before Dundalk FC’s Europa League date with Levadia.

For some reason, I often wonder did Jim see Samuel Umtiti’s winning goal, which came early in the second half? Undistracted by the exploits of what seemed like a classic Jolly Boys Outing, in a bar which required sharp reflexes to avoid its low ceiling in places, Jim decided enough was enough at half-time. He wanted to watch the game in peace, at his hotel room. A pure football man.

The other outstanding memory of that gathering was the caricature chalked by The Voice of Oriel Park, Mickey Duffy, on the 'green' board adjacent to a well-worn darts target, alongside the caption: ‘Mad Jim Murphy’. Well, as our crew agreed, having been able to get a picture of the man himself beside the drawing, if Jim is ‘mad’, there’s none of us sane. 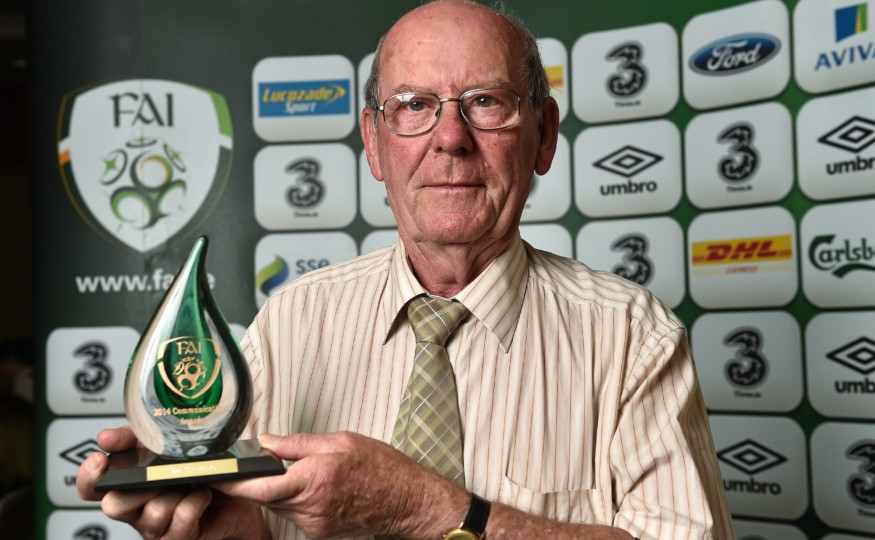 At the same time, it’s not strange that those recollections came flooding back when news of his passing filtered through on Saturday. After all, Jim Murphy was a memory invoker. For those practising Dundalk fandom a lot longer than yours truly, travelling back through the generations, his publications on the club are of biblical proportions, a point of reference and a source of comfort. Every detail worth knowing about Carrick Road Lilywhites from before its inception to just past the Millenium is catered for. An update was released in more recent years.

A labour of love it may have been, but he has done the local area, and the football club he deeply cherished, an invaluable service. And he never stopped, it seems. When UEFA released its statistical reference guide early last summer, prior to the Champions League preliminaries getting underway, a picture began to circulate on social media of Jim studying it, having firstly printed it off. If ever a snap captured the patient essence of a person, that was it. Simply in his element.

One’s personal relationship with Jim only really emerged when these feet were safely tucked under The Democrat’s table. It was a quiet week towards the end of 2017 and a query emerged regarding Stephen O’Donnell, as to whether he was set to become the club’s longest-serving captain. Who else to contact but a man who if appearing on Mastermind would almost certainly have had Dundalk FC as his chosen subject.

The answer to the question was yes, Jim having gone over one’s research in consultation with his books. Yet he wouldn’t accept any formal gratitude, insisting on receiving no credit when the story with O’Donnell was duly written. Perhaps the little nugget of information, another record to add to the endless others he held, was worth more to him than a merely published ‘thanks’.

And then when it came to choosing the 10 greatest moments in Dundalk’s history, and selecting a panel to formulate the shortlist, the great man himself was again on hand. He featured on a committee containing former players, journalists and lifelong followers, in April 2018.

The serious meeting took place in McGeough’s of a Friday morning and in the aftermath of furious debate, in which Jim played a vocal part, the selections were made. As we prepared to go our separate ways, Jim took me aside and asked when we were coming together to select the club’s all-time XI. Unfortunately, that never materialised.

Not shy in the humour stakes either, later that day Dundalk were taking on Derry City at Oriel Park and a photograph of the panel was required. There was a delay when one of the selectors got caught talking on the way from his seat and Jim became somewhat anxious. “We’re wasting valuable drinking time.” What else to do but laugh.

What does Jim Murphy and Les Blues have in common? Well, having gone on to win the World Cup in Russia, the French players laminated their legendary status. Jim already knew how that felt. He was just a one-off. “God bless”.