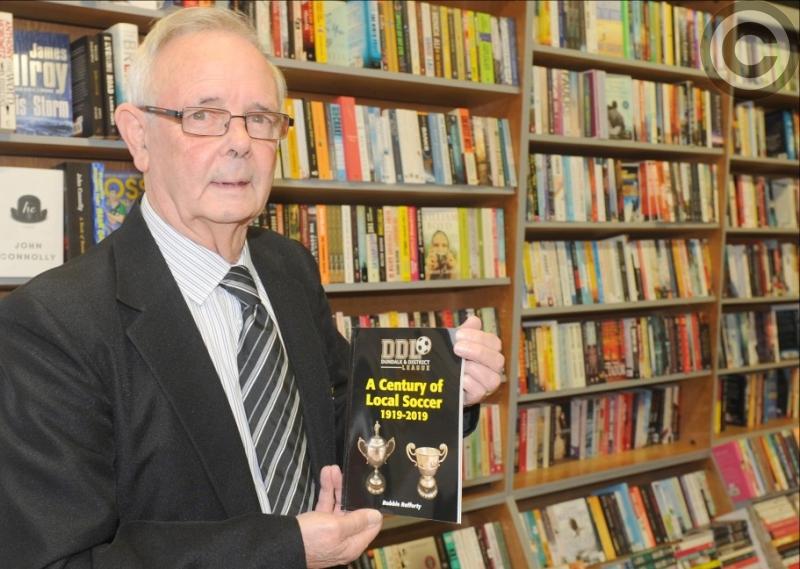 It wasn’t really necessary to buy a copy of ‘A Century of Local Soccer’ to establish its author, Robbie Rafferty, is an authority on the subject. But I did, and haven’t been disappointed (A Dullaghan)

It wasn’t really necessary to buy a copy of ‘A Century of Local Soccer’ to establish its author, Robbie Rafferty, is an authority on the subject. But I did, and haven’t been disappointed.

In my days sitting behind a desk in this paper’s office, I knew firsthand of Robbie’s contribution to the soccer pages for which sports editor, Gerry Prendergast, was responsible each week. Scorelines and fixtures were forwarded on time, and along with that, there were reports and features, all of them centred on the game as it was played by chaps around town and in outlining districts.

The link was maintained after Gerry passed on the red pen to the McLaughlin boys, Gary and Gavin, and is still there, Caoimhín Reilly now the one to take charge of the copy submitted by this most wonderful of enthusiasts.

The newspaper connection aside, Robbie is a regular on John Murphy’s Saturday afternoon show on Dundalk FM, and here his encyclopaedic knowledge of the game comes into play. I can identify with the teams and players he mentions from the 1950s and ’60s. Bendigo, Ballybarrack, Central, Demesne Celtic, St. Patrick’s and, of course, the team that gave its name to the grounds where most games were played, St. Joseph’s, were the ones I remember best.

Back then, when sport in its many hues was all that seemed to matter, St. Joseph’s Park was a summer attraction – in the winter, it was next door in Oriel Park. Both were only a stone’s throw from where I first saw the light of day.

How lucky today’s league is to have people of the calibre of Robbie Rafferty and Gussie Hearty working as chairman and secretary, respectively. They belong to a long line of most able administrators, people like Billy Hill, Jimmy Clancy, Paddy McCourt, Alan McComish, Jim Berry, Cathal Mulholland, Aidan Carragher, Matt Scollon and Patsy Bailey, to name but a few. The first-mentioned was in his pomp when I was a youthful follower, and, as they say, he ran a tight ship.

‘Century’ is Rafferty’s third book on the subject, and it contains many interesting facts. Did you know that as many as nine future Internationals cut their teeth in the local league, all of them, bar three, playing for the Republic. Ken Finn lined out for the USA, Frank McCourt with Northern Ireland, and it was on emigrating Down Under that Tom ‘Bunty’ McCabe won eight caps with New Zealand.

A number of local referees saw duty as linesmen on FAI Cup final day – Denis McArdle was the man in the middle for the 1994 meeting of Sligo and Derry, and he also took charge of several Internationals.

I don’t know how long I know Bertie Dullaghan, a Dundalk Gaels colleague of mine. Nigh on 60 years, I’d say, from before we teamed up on the blue-and-whites senior team. And to think in all those years I didn’t know Bert was a poet. And that he played in the Summer League.

Alongside a photo of the Clark Crusaders team that played in the 1969 Cup final is his poem, Football on the Streets.

We always had a tennis ball, or one made out of rags/ We used our coats as goalposts, or sods or paper bags/Some lads were only ‘blaggers’, and some had touches neat/But others downright dirty, playing football in the street.

I saw the time when the publication of such material would have had Bertie up before the Páirc na nGaeil stewards, and it wouldn’t have done Noel Connolly any good to be pictured in a Spurs underage side. Not as stringent in their application of Rule 27, Clan na Gael are unlikely to have hauled Leslie Toal or Fra Byrne over the coals for playing with PJ Carrolls FC.

Along with a plethora of photos, recent and from as far back as 1919, ‘A Century of Local Soccer’ has lots of stories and no shortage of stats. Robbie Rafferty can be proud to have brought up the hat-trick.