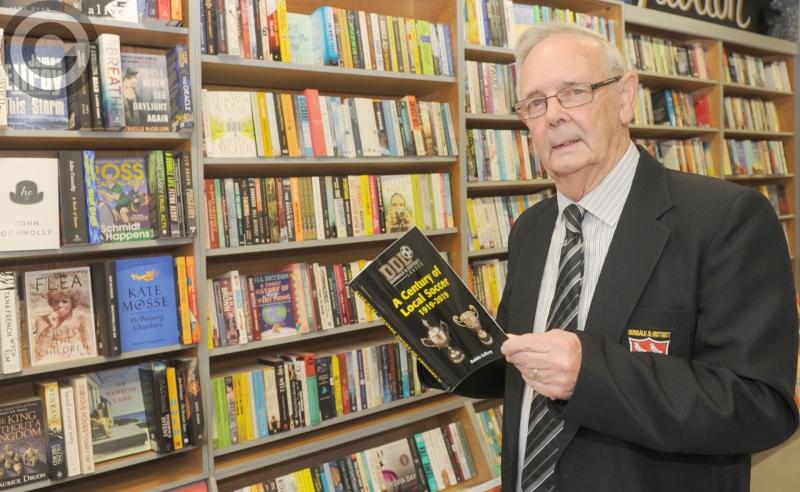 For however long the Dundalk & District League maintains its tradition in the locality, Robbie Rafferty’s name will be recalled as an associate.

The third book on the ‘Summer League’, all written by the former Rangers player, was released to the public on Saturday afternoon as three years of work by the author came to fruition, two decades since he penned the last edition.

The latest collector’s item ensures all 100 years of the League are chronicled, the length of the competition’s existence underlining the important role it has played in life in Dundalk over several generations.

“After the Second World War you had rationing and everything else, people had nothing and the only recreational activities were the cinema, a dance or football, whether it be Gaelic or soccer,” Rafferty tells The Democrat.

“The Summer League was a great outlet for people. 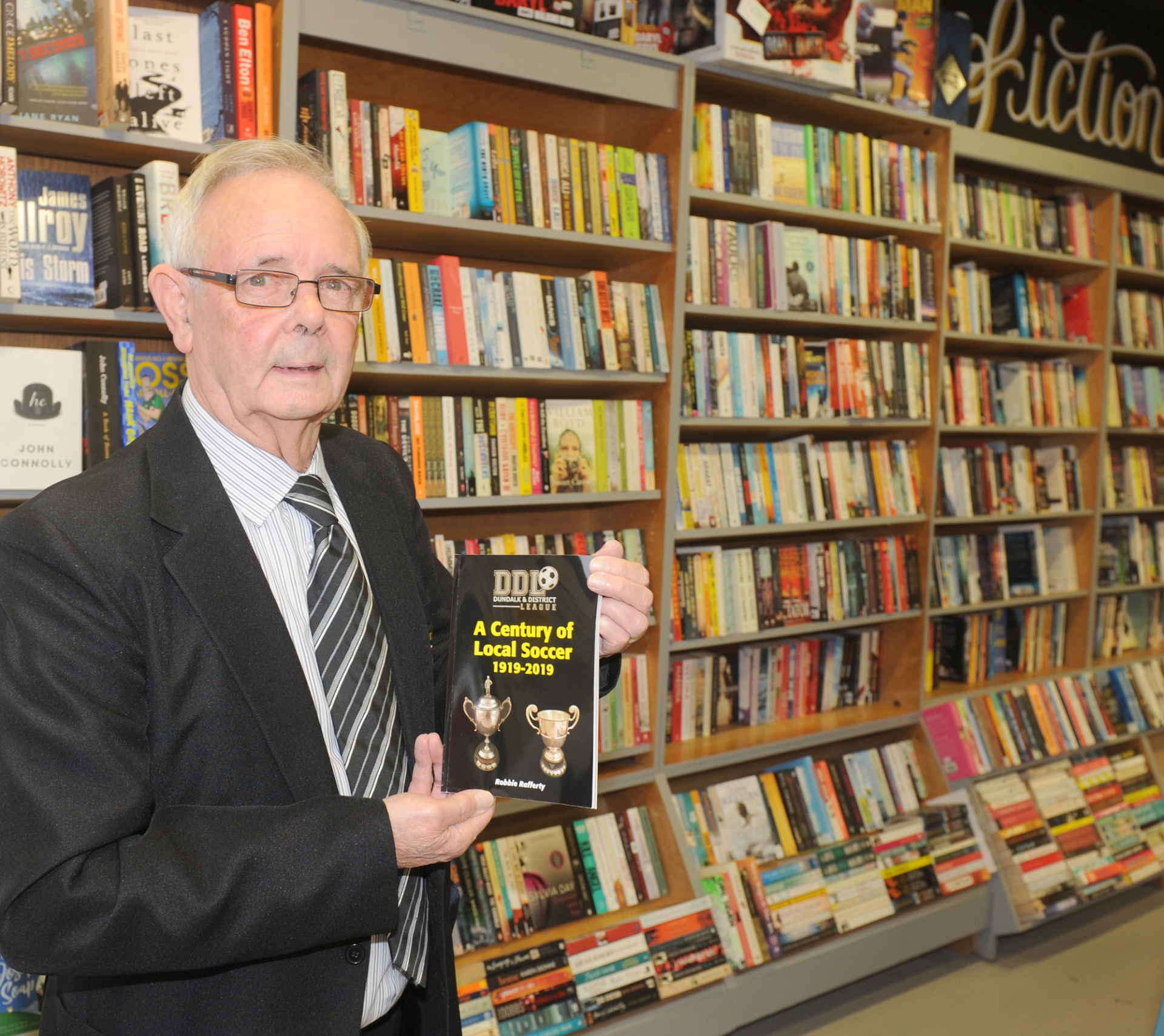 “Now, it’s a matter of getting younger people into it and putting a fresher look on it. It’s after been going for over 100 years and has been such a part of life in Dundalk.

“It’s spanning now two centuries so it’d be very sad to see it disappear out of the sporting calendar of the year.”

Rafferty, of course, is referring to the dangers which currently plague local sport, in that playing numbers aren’t of the flush degree they once were. The figure of clubs competing in the Summer League has dropped from three divisions worth to seven or eight teams.

But the DDL’s chairman, Rafferty and fellow stalwarts, such as secretary Gussie Hearty, remain at the coalface and the latest book release illustrates their commitment to a cause they have known all their lives.

After all, Robbie’s earliest memory of the Summer League is from 1949, when his father, Peter, took him to a game in Bellurgan on the bar of the bicycle, and from there football became a religion. His uncle, Robbie, and Dundalk FC legend Joe Ralph were a part of the Demesne Celtic team of his oul fella.

Through his youth, Rafferty, who hailed from Pearse Park, played for O’Hanlon Park’s Southend United, a club in which Barney Campbell was a driving force, before later lining out for Rangers and Sunderland, whose focal point was Joe Thornton.

“Joe was one of these men who took all the free-kicks, corner-kicks, penalty-kicks, even the goal-kicks. He was the man,” Robbie says.

A student of the De La Salle, he recalls the clerics there not being “as strict as the Christian Brothers” in the sense of opposing soccer.

“Most of them, believe it or not, were hurling men because they came from Kilkenny, Tipp and places like that.

“You heard some horror stories about the Christian Brothers if you were caught going up to a game. But we had one brother, Brother Richard from Kilkenny - if there was a replay of a Cup match, it was always on a Thursday afternoon which was the half-day for shops in the town - he would go to the games himself. He’d actually let us out of school early and we’d see him above at the game.

“There’s a poem in the book about football on the streets and there’s a piece in it about when they’d see the Christian Brothers, they’d switch over to playing Gaelic.”

Robbie won two cups with “the Pat’s” and later a Second Division with Greenfield, who he co-founded along with Brian Carroll.
The name Jimmy McEvoy happens to pop into conversation along the way…

“McEvoy went to Wolverhampton Wanderers, but came back and played for Distillery down the North for years. He told me one time he was playing in the Cup final and got on the train here in Dundalk to go down. The man sitting opposite him, he got talking to him, was actually the referee, he was from England.

“At that time the rationing was severe in the North so Jimmy used to be taking things down for players that they couldn’t get, but he gave them all to the referee.

“The next day the final is on, I don’t know who they were playing, but McEvoy would take the head off you, no mercy whatsoever and he give this fella two or three awful doings. The referee came over, ‘Jimmy’, he says, ‘I have to sit down with these two teams after the match for dinner. Take it handy’.

“Jimmy was taking advantage of their meeting the day before…”

MEMORABLE TIMES
But his most memorable times were arguably when on the Rangers team, who he represented in the AUL, with Gerry Gover a central figure.

“The team we had in the AUL was practically a League of Ireland team,” Robbie adds, looking back.

“I was a full-back, I started off as a half-back, and I always played on the left side even though I’m right footed.” 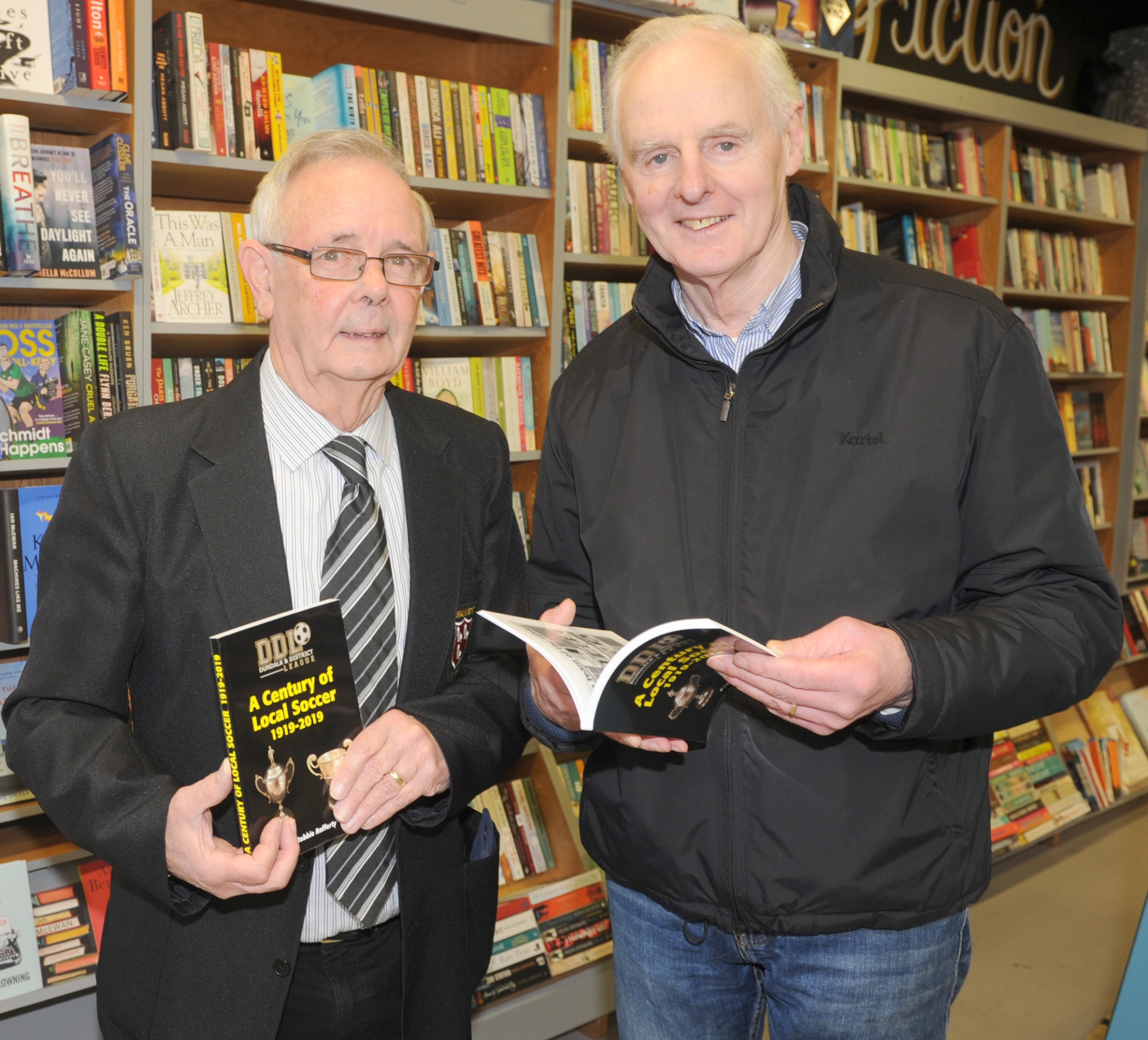 “A man called Tommy McGrory from Castlebellingham, he’s only after passing away. He played GAA with O’Connell’s and Stabannon, and he used to play for Glyde Rovers in the Summer League.

“It was when I was getting married and quitting football. It was my last chance to get a go at Tommy. It was out in Moorland, the pitch was as hard as the hobs of hell. I lifted Tommy out of it, it was the last chance I said I’d ever get at him.

“The last time I was talking to him they were after putting seats around Oriel Park. He says: ‘Do you know you’re sitting in Gaelic seats?’

“That’s the last conversation I ever had with him.”

EARLY RETIREMENT
He mentions retirement, which seems premature now. After marrying his late wife, Tina, in 1970, Rafferty’s playing career ended at 26. Now living “down the North”, the prospect of travelling into Dundalk for work - he was employed in various factories as a “maintenance fitter” - before going back again later in the evening for training wasn’t feasible.

Carroll got him back for a spell in 1972 during Greenfield’s victorious Second Division campaign, which sparked a memorable run for the club, with First and Premier Division titles to follow on the trot. But that was that, in terms of Summer League involvement, bar watching his sons, Brendan and Robert, play, until after the passing of his wife in 2007.

“It’s strange because when she (Tina) came along, I stopped playing football, and when she passed away, Gussie and Alan McComish asked me to go on to the committee of the Summer League,” Rafferty adds.

“She loved football, Tina. She always wished she could have played football.”

His undertaking of the first two history books, in the 1990s, served a purpose.

“When I was laid off out of the Ecco I decided that I was going to do something to keep myself focused.

“I decided that I’d try to look into the history of the Summer League and that’s where it all started. The first book was in 1997 and another one followed in ’99.

“Most of the stuff in those books would have appeared in The Dundalk Democrat before that.”

And they proved worthwhile. Not merely for the prestige, but for the positivity they garnered. People were genuinely thankful, grateful for both the Summer League and Robbie’s ability to put its history into a ‘bible’.

“The East Wall boys knew him, so we won the game, but lost it on an objection because we’d an illegal player…

“At the game there were two boys, a man called Larry O’Hagan and his mate, who were out hunting through the fields. They came back and stopped to watch the game with the rifles over their shoulders. But they ended up roaring and shouting at the Dublin referee.

“So, three days later, (Gerry) Gover gets a letter from the AUL to report up to Dublin on such a date. They got the referee’s report that he was threatened by gunmen at the game. Gover had to go up and try and explain this…

“I actually put the story into one of the first books and I remember my father was after dying and I was out at the graveyard with my wife. This woman came down, I didn’t know who she was at the time, but she asks: ‘Are you the man who wrote the book about the Summer League?’

“‘Well, do you know,’ she says, ‘my husband, Larry (who was after dying), every time we’d anything on in the house he opened up the book about that incident and the place would be in an uproar. I just wanted to tell you that’.

“I remember working in the pen factory when the second book came out. This woman came up to me to thank me, because she bought one of the books. She was caring for her father, who had dementia.

“You get wee bits of feedback like that… worth more than anything.”

And maybe that’s just what the Summer League is… worth more than anything.