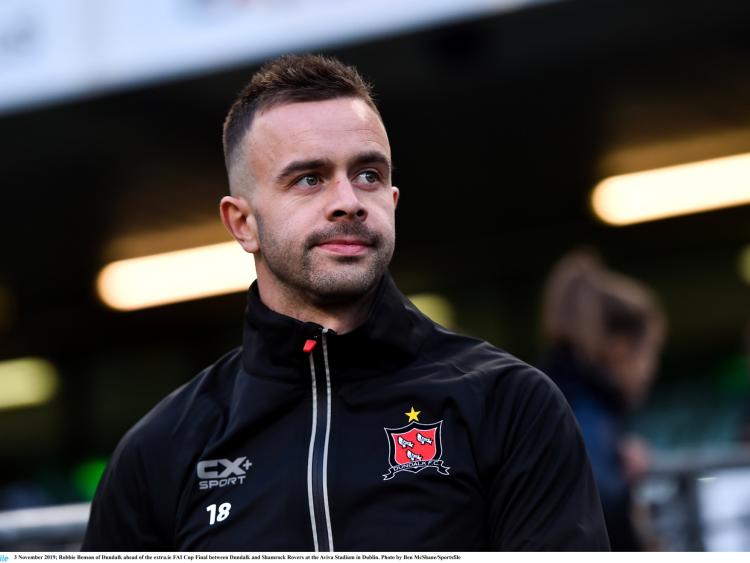 Robbie Benson has linked up with former Dundalk team-mate Stephen O’Donnell and signed for St. Patrick’s Athletic ahead of the 2020 season. (Pic: Sportsfile)

As had been expected for some time, Robbie Benson has linked up with former Dundalk team-mate Stephen O’Donnell and signed for St. Patrick’s Athletic ahead of the 2020 season.

Benson had already confirmed his departure from Oriel Park on Monday night after scoring in the Lilywhites’ 6-0 win over Linfield, as they won the inaugural Unite the Union Champions Cup.

The Athlone native has spent the last four years with Dundalk after joining from UCD and played an integral role in the club’s success over that period, which incorporated three SSE Airtricity League titles, two EA Sports Cups, an FAI Cup, on top of a run to the UEFA Europa League group stages.

“I'm happy with the move and I am looking forward to the next stage in my career,” Benson said, who possesses a master’s degree in actuarial science.

“Stephen got onto me and informed me of what he was setting out to do at the club and it seemed like the right fit for me and a chance to seek a new challenge. I know Stephen and have great respect for him, so it was easy for me to make the jump and join Pat's.

“Stephen is a person who was a great team-mate, captain, person and mentor to me in my time at Dundalk. Anyone who knows Stephen or played with him or encountered him will know his philosophies on the game and how much knowledge of the game he has. He now has a good platform to put his stamp on things, and that married with a club the stature of St. Pat's – it's a great platform for Stephen. He can bring success back to St. Pat's and hopefully I can play a small part in helping in that.”

Benson may have been restricted to just 13 league outings in 2019 due to injury, but made close to a century of appearances for Dundalk since joining the club in 2016.