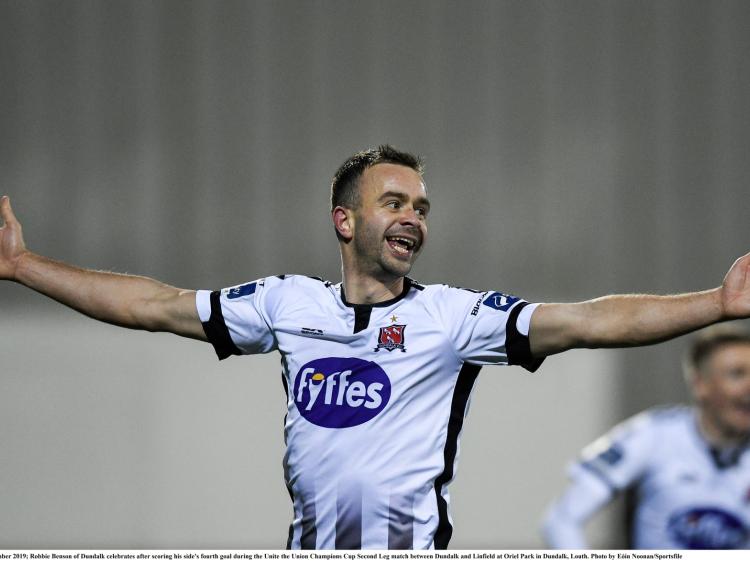 Robbie Benson, who has announced his departure from Dundalk FC, celebrates scoring in what was his last game for the club, against Linfield at Oriel Park. (Pic: Sportsfile)

Midfielder Robbie Benson has announced his departure from Dundalk FC.

The Athlone native played and scored in tonight's Unite the Union Champions Cup second leg trouncing of Linfield at Oriel Park, going off to a standing ovation midway through the second period.

He was seen embracing all members of the Lilywhites bench and confirmed afterwards that he is leaving after four seasons with the club.

"There is no point in denying it now," he told RTÉ Sport.

Robbie Benson confirms he has played his final game for Dundalk. What a player he's been for the Lilywhites #RTEsoccer pic.twitter.com/8gf8b3sYfN

"It would be kind of insulting to people to say otherwise, but tonight was my last game for the club.

"I've been very successful here over the last four years and I'd just like to say thanks to everyone - staff and players - that have been with me, and the fans as well.

"I just feel it's the right time for me to move on in search of a new challenge."

St. Patrick's Athletic is believed to be his destination, where he will work under former team-mate Stephen O'Donnell, but Benson stopped short of confirming that.

"It's not fair of me to say anything; there's nothing decided yet, officially.

"Tonight's about my last game with Dundalk, I've enjoyed my time here and am very grateful for all the success we've had."