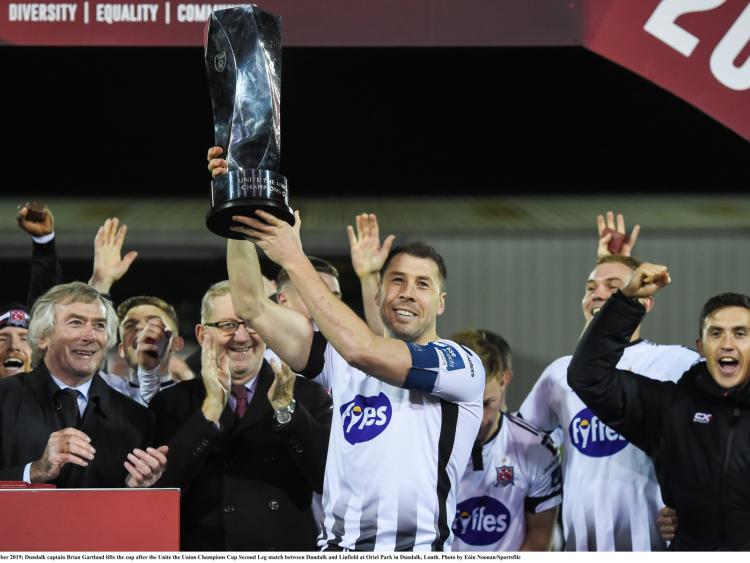 Vinny Perth felt last night’s Unite the Union Champions Cup thrashing of Linfield was “a worthy way” for his side to finish a memorable campaign.

The Lilywhites hit the Irish League kingpins for six at Oriel Park to prevail 7-1 on aggregate and earn the club’s fourth piece of silverware of the season, following the respective Airtricity League, EA Sports Cup and President’s Cup triumphs.

“It was a worthy way for this group of players to finish the season; it was tremendous,” Perth said.

“When we play with that intensity there are not many better than us. I think that was the complete performance tonight.”

Friday’s draw at Windsor Park reflected two evenly-matched teams, but with eight changes to the starting line-up, Dundalk held a much more fearsome look for the return leg, and so it proved.

However, Perth is adamant that an all-island league, which would see more cross-border meetings, is the way forward, despite Monday night’s outcome.

“I think both leagues need to improve and there is no point doing the same thing every year and expecting different results,” the Dubliner added.

“We’ve got to challenge each other and I know it’s gone against Linfield tonight, but the game against them on Friday night was a real challenge.

“We’re just standing still, the administration of the game is not good enough in this country at the moment; we’ve got to do better and be much stronger.”

Man-of-the-match Chris Shields reckons, in spite of the one-sided outcome, the two-legged clash of the champions is worth pursuing.

“I think it’s a great concept; something different, which could peak the wider interest. It’s maybe something that both leagues need.

“I’m a fan of it and hopefully it will continue, and maybe even broaden again.”