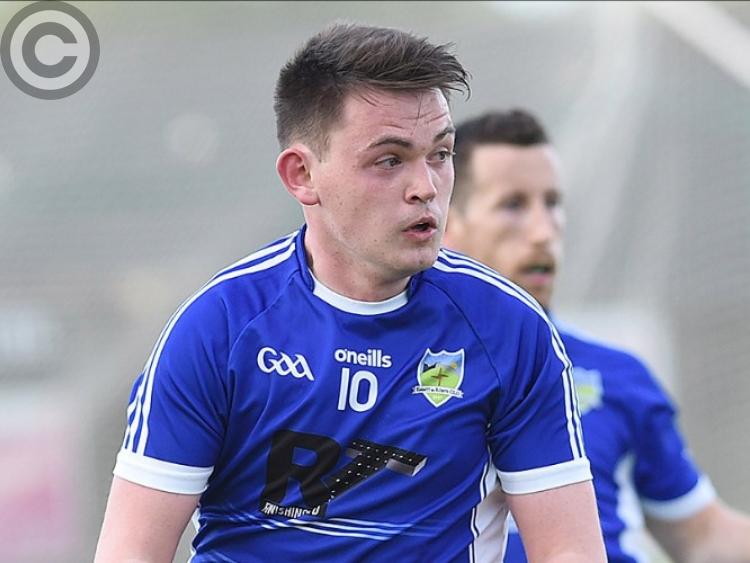 Roche Emmets’ Evin Quigley plans to stylishly arrive for “the half-time show” on Saturday afternoon, as Louth’s junior kingpins plot a route to the Leinster semi-final.

The 21-year-old is unlikely to be in Offaly for his team’s throw-in against Shannonbridge due to his graduation ceremony at the Helix.

Quigley, who made such an impact when introduced during the drawn decider against Glyde Rangers last month, finished up in DCU last spring with a degree in English and Irish, and is now completing a masters in Marino with the aim of qualifying as a primary school teacher.

“I’ll look well coming into Offaly,” he told The Democrat. “I’ll be coming in with the suit on, the scroll in one hand and carrying the boots in the other…

“I’ll have to get a picture or two taken, to my own chagrin, and then I’ll have the sat-nav ready, but I’ll do well if I can get there for the half-time show.

“I was looking at the map, it’ll be between an hour and 20 and the hour and 40 to get there, and I’d like to put on the record that I’d never drive over the speed limit.”

The powerful left-footer had “a sneaky feeling” the two events would clash, even before Roche got over Castletown Gaels in Dowdallshill on last Saturday week.

“There’s always ones who know more about everything than you. People I’m in the course with now were saying that it’s going to be November 9.”

Not that he was broadcasting the potential collision, for fear of tempting a jinx.

He hopes, however, that his team-mates will have the lion’s share of the work done by the time he rolls into Faithful Fields and that two major milestone occasions pass as they’re planned to.

Albeit he accepts the importance of his graduation, for obvious reasons, anyone familiar with Quigley understands his commitment to the Roche cause.

A recognisable face around Rathduff, he bleeds blue and white, even if he has strong links to St. Joseph’s.

His mother, Gina, is the daughter of the late Paddy Cluskey, of Darver, whom the Joes’ Dromiskin base is named in memory of.

Yet, with Evin’s father, Brendan, having been chairman of Roche in more recent times, the one life one club motto rings true where he is concerned.

“The first game I was at was an oul’ junior game in Monasterboice, a frosty night, with myself, Dad and my sister. I was almost five and from then on we’ve been going to nearly every game.

“Those times Roche were senior and I remember Roche playing in the senior championship, although we never had a whole pile of success.

“In intermediate, we held our own for a few years and unfortunately in my first year (2014) - although I try not to look at it as a bad omen - training with the team we went down in the championship. Think of that what you will…

“But it’s great to be back up intermediate and we’ve a lot of young lads who wouldn’t really know about (the struggles) and would have no baggage really.

“We look at teams, Young Irelands last year would have considered themselves as a grade above the standard they were playing. They maintained their status this year. Why can’t we emulate that?

“Look at St. Mochta’s, it’s 10 years since they won the junior, but they’re flying on and in a few years you’ll definitely be looking at them as contenders for Joe Ward.

Evin Quigley down in a heap here for Roche after being absolutely rampaged into by team-mate Dan O'Connell. I remember a fella telling me he hit Evin a shoulder one time and he never moved...

“We’ve quite a good few minor players and are quite a young team - poor Kevin Callaghan won’t like me saying, with the exception of him… And Dan (O’Connell), sure he’s an oul’ fella now, and you can quote me on that...

“We’ve plenty of players kicking into their prime and hopefully when I’m there on Saturday we’ll be a good bit of the way to the Leinster semi-final.”

That’d ensure the high achiever of another top mark.