Caoimhín Reilly, at the Aviva Stadium 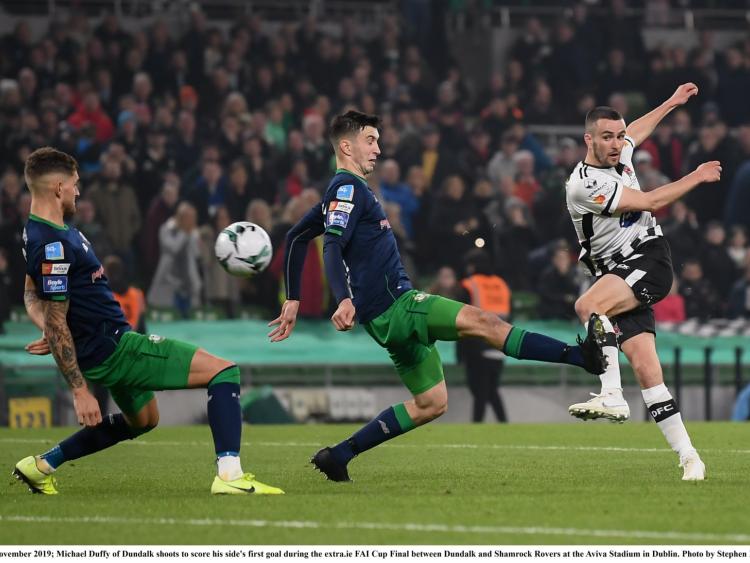 HIGHLIGHT
It’s really difficult to discuss highlights when the overwhelming sense is negative and of disappointment.

Still, Michael Duffy’s goal three minutes into stoppage time was fairly incredible in both its execution and perfect timing, with Rovers on the verge prevailing in normal time.

A left-footed half-volley hit on the turn, it was a finish of immense skill and beauty.

LOWLIGHT
The result is the obvious conclusion, but lowest point would have to be Michael Duffy’s penalty miss. He hit it with power, only for the ball to come back out off the crossbar.

You would have to be fairly cold not to feel for the Derry man, who owes nothing to the Dundalk supporters at this stage. One hoped that he would banish the demons of two years ago when his shootout miss proved hugely costly against Cork City.

TURNING POINT
Had Daniel Cleary’s header right on half-time been a yard inside the post, you get the feeling that Dundalk would be celebrating a treble.

The towering defender firmly met Seán Murray’s inswinging delivery, but arrowed his nod off target when he would almost certainly have registered had it been accurate, given his proximity to goal.

Had it gone in, the dynamic of the match shifts hugely.

MAIN MAN
Brian Gartland was voted as the local media’s man of the match last year and the captain once again gets the nod this season. For a player who hasn’t got many games in recent times, he delivered a defensive masterclass; gave an exhibition in positioning.

REF WATCH
Dublin’s Derek Tomney was barely noticeable, which, one assumes, is the greatest compliment you can pay an official. Had no palpable bearing on the outcome.