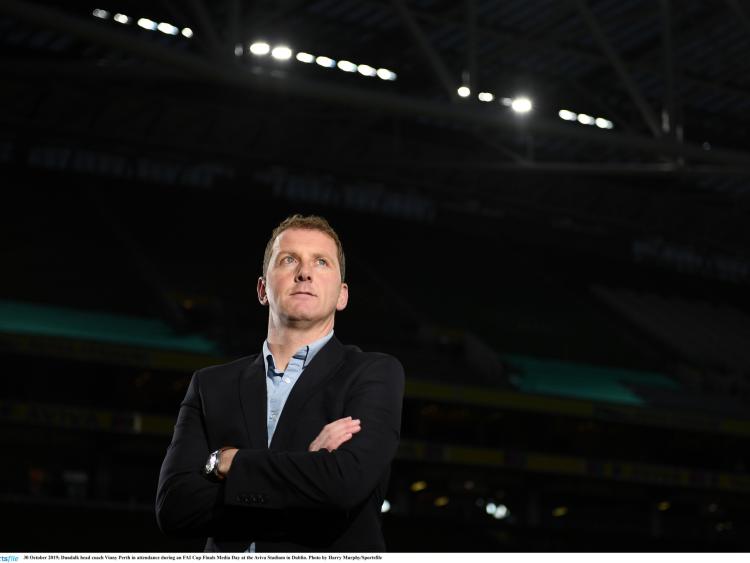 Vinny Perth insists the pressure is off Dundalk FC and that the FAI Cup final is a “free hit” for his players, who he hopes will “guarantee” themselves a place among the league's all-time greats.

Vinny Perth insists the pressure is off Dundalk FC and that the FAI Cup final is a “free hit” for his players, who he hopes will “guarantee” themselves a place among the League of Ireland all-time greats by completing a historic treble.

With the SSE Airtricity League Premier Division title lifted, Perth says their objective for the season has been completed and that thoughts have already turned to retaining it once again in 2020.

The EA SPORTS Cup is also in the bag and, on Sunday, Dundalk will become only the second-ever team – after Derry City in 1989 – to win the domestic treble if they see off Shamrock Rovers at the Aviva Stadium.

That is a huge prize and achievement at stake for a club which has been almost completely dominant in the league since 2014. Perth knows it is a “massive opportunity” to create their biggest piece of history yet during this golden era, but, first and foremost, he wants his team to go and enjoy the occasion. 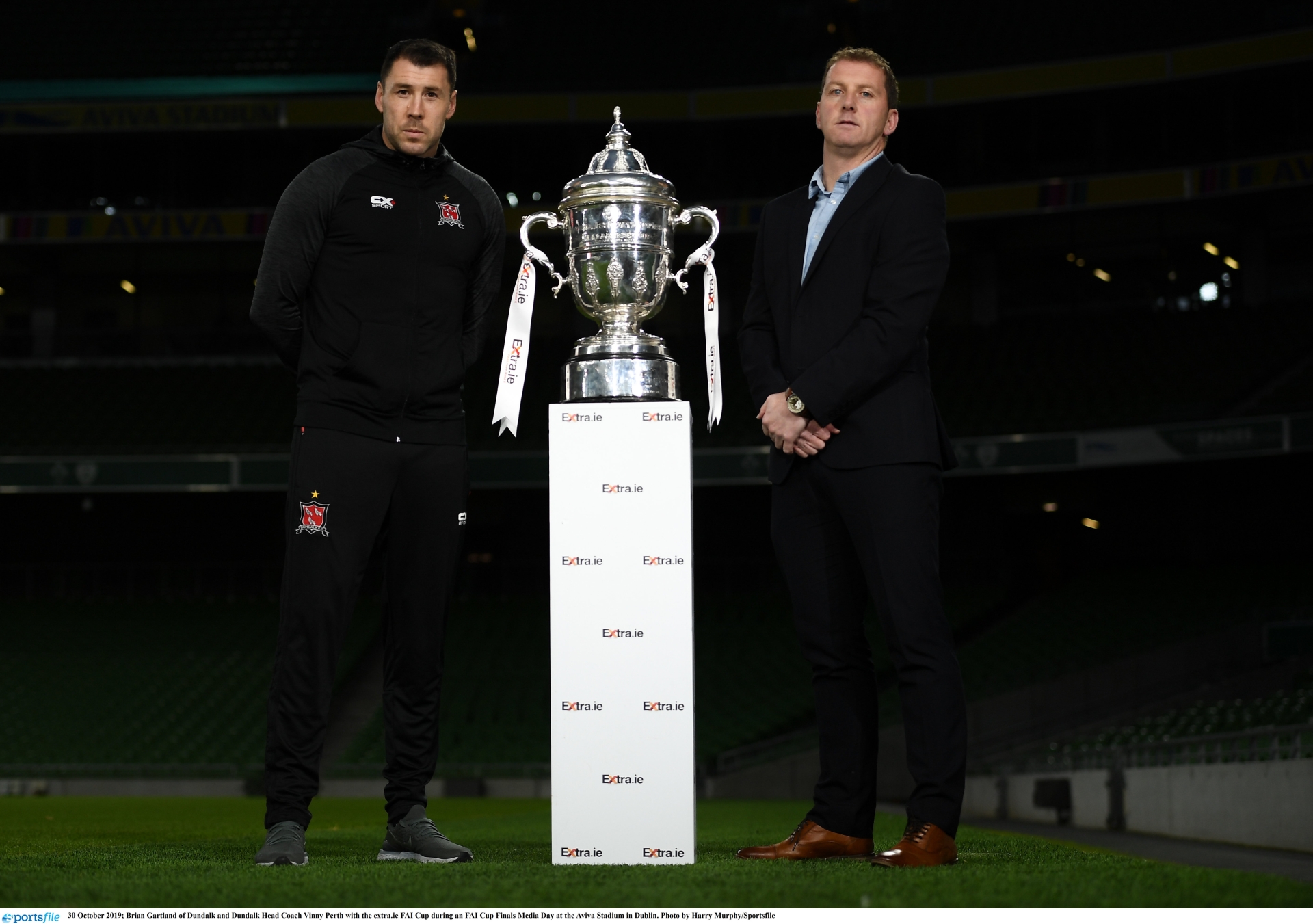 “It’s an opportunity to create a bit of history, but the pressure is off for us. We’ve achieved our goal. We’re ready to move on to next season. We’ll have a crack off the treble, obviously,” Vinny said.

“I want this group to go down as one of the all-time great teams, ever. When I say the group, I mean the people that have been here over the last seven years – your O’Donnells, Towells, Horgans, all played a part in it – Stephen Kenny.

“If they achieve a treble this year, it would guarantee that they would go down as one of the all-time greats as a group over the last seven years. That’s what I hope they achieve, but, ultimately, I don’t see it as a pressure game for us. I think it’s a free hit to go and enjoy ourselves and embrace that stadium.”

Dundalk completed their league campaign in style with a 4-0 win over St. Patrick’s Athletic at Oriel Park on Friday night before lifting the league trophy for the fifth time in six seasons.

The performances of some have given Perth a real headache with team selection for next Sunday. The head coach revealed after Friday’s victory that winger Michael Duffy would have played “if the money was on the table” and that Patrick McEleney could have also featured, with a fully-fit squad reported for the decider.

That in itself creates problems, with Perth admitting: “There is no doubt I’ll have some sleepless nights over the next week. It’s a very difficult position when you’ve got so many good players. I’ve got to manage with my head over the next week and not with my heart at times in terms of the decision. At the same time, I believe in a little bit of magic.” 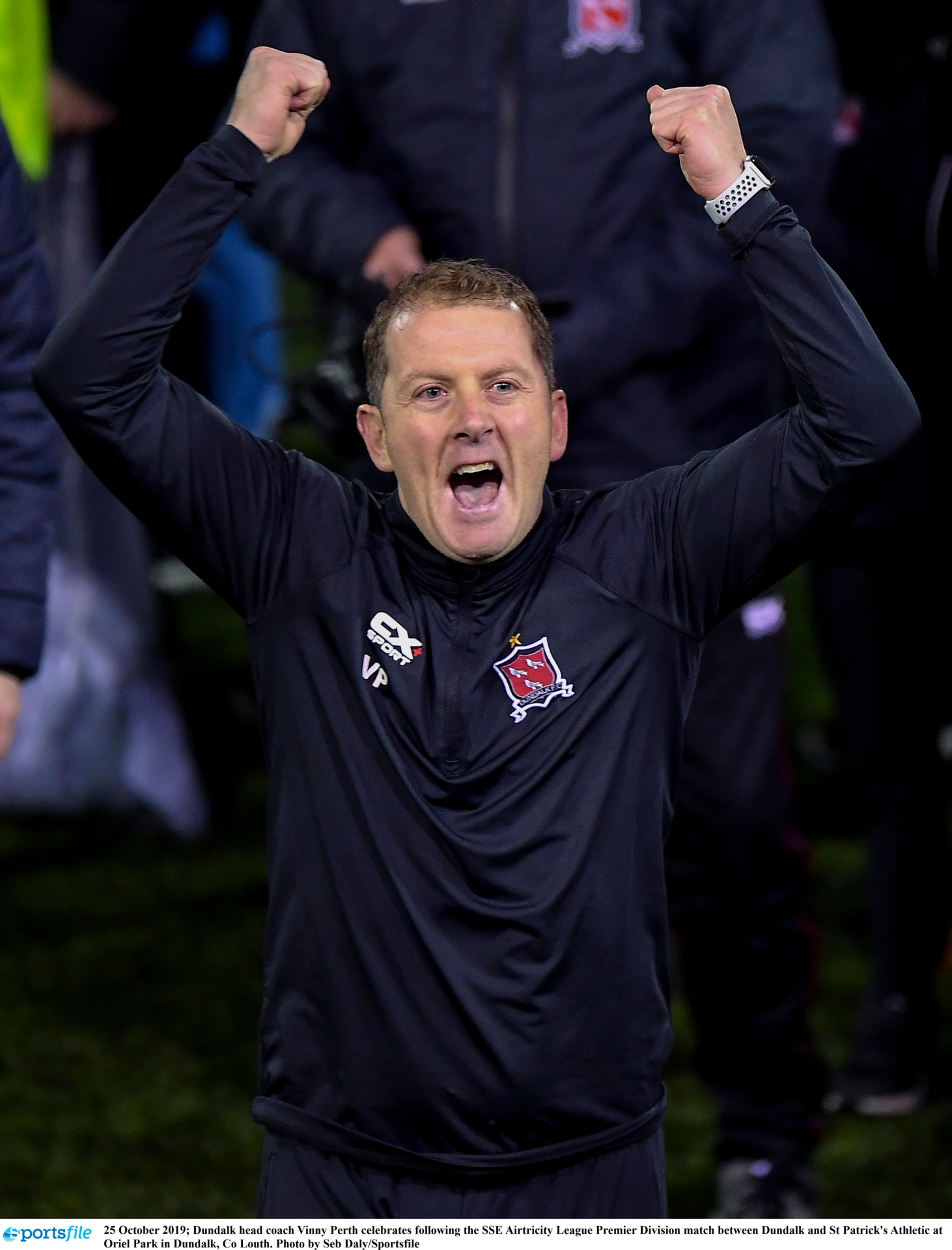 Dundalk have held the upper-hand against Shamrock Rovers this season, winning the last three meetings having drawn the first one at Tallaght Stadium back in March.

The Hoops have certainly caused them problems, though, particularly in the two most-recent encounters, and Perth knows they are “a dangerous side”.

He said: “They have been our nearest rivals for so long this season. It has always been really tough games with them. There are games where they’ve been on top this season, there are other games we’ve been. They’re a dangerous side. They keep the ball well. It’s going to be a difficult tie for us.”

Perth agreed that Rovers would provide a very different challenge to the one posed by Cork City in the past four finals – of which Dundalk won two and lost two – and that a game-plan will have been put in place from the first training session of the week.

“Their ability to keep the ball is something we’ll have to work on this week and how we put them under a bit of pressure. We haven’t really focussed on them yet,” Perth said, speaking on Friday night.

“We’ve obviously done work in the background, we’ve been scouting them for a couple of weeks and we’ve prepared our video sessions and all that stuff, but we haven’t discussed it with the players. It’s not the focus until Monday. Come Monday, we’ll get a game-plan ready and we’ll have a crack off it.”