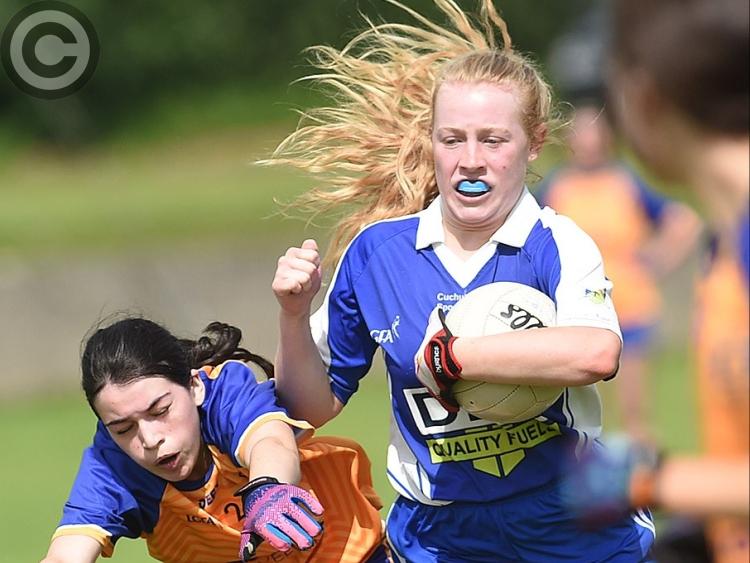 Seona Halligan has emerged as a real threat for Roche Emmets, who take on St. Patrick's in tomorrow's Division Two final in Kilkerley. (Pic: Arthur Kinahan)

In the opening game in Kilkerley, St. Patrick’s will meet Roche Emmets in the Division Two final looking to complete a league and championship double.

The intermediate champions saw off Clan na Gael on the Ecco Road last Sunday morning, running out 4–10 to 2–4 winners, while Roche booked their place in the decider with a convincing 1–12 to 0–4 win over Naomh Fionnbarra.

Louth captain Kate Flood is expected to lead the Pat's attack just days before her departure to Australia where she will spend the winter representing Fremantle in Aussie Rules.

The Lordship side have been in terrific form all season and success on Sunday will go a long way to eradicating the bitter memories of last season where they lost to St. Fechin's in the championship final and also to Mattock Rangers in the league decider.

Their side also contains four other members of the Louth panel and they have acquired a winning mindset.

Their opponents, Roche have been the story of the season. They have struggled for form and results in recent years, but the appointment of Micheal Heeney has seen a remarkable upturn in their fortunes, as they have emerged as a strong force of youth and experience keen to bring a helping of success to the Faughart Parish.

They reached the senior semi-final for the first time in nine years and have been hugely impressive in their league campaign. The ex-Louth U21 manager has assembled a talented team in which the younger members have excelled. Abi Keenan and Seona Halligan were standout performers on the Louth U16 team who won this year's All-Ireland title, while midfielder Louise Byrne is another exciting youngster to emerge.

While St. Patrick's will start most people's fancy, Roche look capable of causing an upset in what should make for a cracking clash.

Throw-in is 11am in Kilkerley.