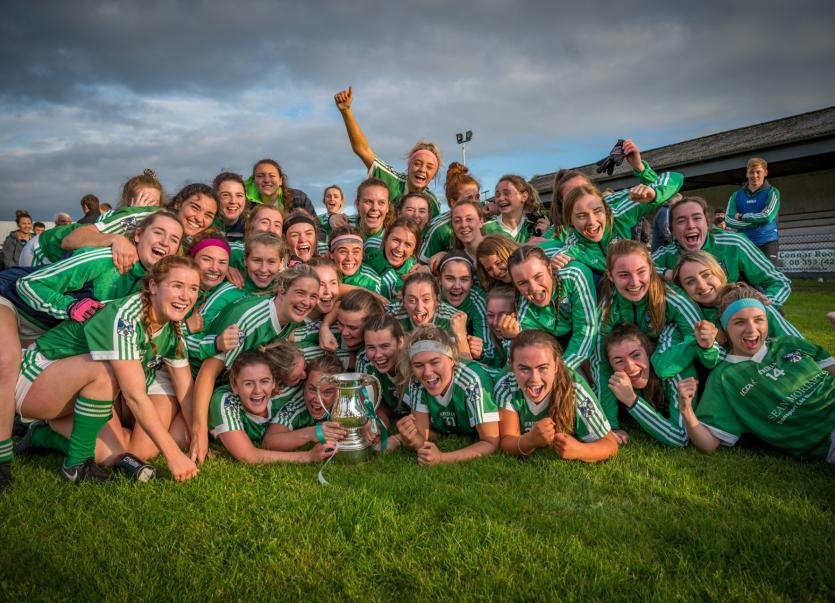 Geraldines go in search of a league and Louth LGFA SFC double this weekend when they meet Cooley Kickhams in the Division One final in Kilkerley. (Pic: Warren Matthews)

For the second successive season Geraldines have reached the league final. They will go into Sunday's decider against Cooley knowing victory would not only retain their trophy but would see them complete the domestic season unbeaten.

This is very much a meeting of old foes since both teams have built up a strong rivalry over the course of recent years, having contested the two most recent SFC finals and also last year's minor final.

As is the case in both of Sunday's finals, a galaxy of high-profile, county stars will be in action in this intriguing game.
Geraldines will be in high spirits going into the affair having added a maiden MFC success with a win over St. Mary's recently.  In one of the best finals in recent years the Haggardstown side showed their character to come from behind to take the title on a 2-16 to 5-6 scoreline.

That game underlined the emerging talent that manager Paula Lavin has at her disposal. Holly Lambe Sally turned in a player of the match performance at centre-back, Sarah Morgan was outstanding at midfield, while up front Rebecca Mooney and Louise Corcoran caught the eye.

Word is that the champions may be missing a number of regulars on Sunday and will look to county stars Rebecca Carr, Eilis Hand and Lauren McFaul, along with Ciara O'Connor, to spark their bid for a place in the history books.

Cooley, meanwhile, will lean on Claire Donnelly, Laura Trainor, Laura Grills and the electrifying attacking duo of Niamh Rice - who hit 2-7 in the semi-final win over St. Mochta's, and Lauren Boyle.

Gers were the better side for most of the recent championship final and will start as favourites, but they will be wary of a Cooley side who have turned in some impressive performances in getting this far and they certainly won't be burdened by an inferiority complex.

Whoever plays, for both sides, they can expect a white-hot atmosphere, with a big crowd expected, looking to support their team and try to bring out the best in them.