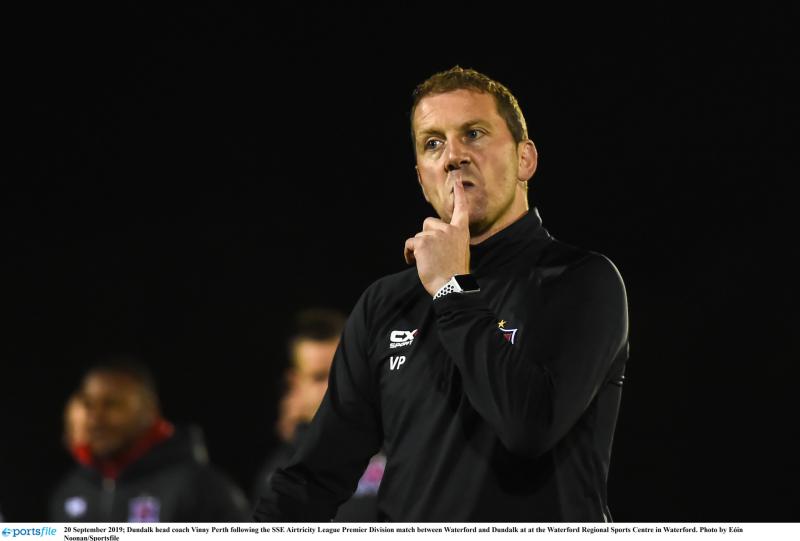 If Vinny Perth were to submit his report right now to be marked up, it would surely be stamped “Passed - with honours”. (Pic: Sportsfile)

If Vinny Perth were to submit his report right now to be marked up, it would surely be stamped “Passed - with honours”.

This is being written before Perth’s Dundalk team play Shamrock Rovers. If the game with the Hoops at Oriel doesn’t/didn’t have a home defeat – it depends on where you’re reading this, on screen or with a paper in front of you - the League’s premier title is remaining at Oriel.

But even if there’s an away win, no need for those who regularly make their way up the Carrick Road to fret; the League of Ireland’s premier trophy won’t be going to Dublin to sit alongside the Sam Maguire. It’s staying put, at the home it has had for four of the last five seasons.

That will mean two of the three trophies on offer to the League’s top 10 teams having a resting place in the Oriel cabinet, and right now it’s odds-on the treble being brought up.

If Perth is feeling good with himself, it’s easy to understand why. Having been at Oriel for six seasons, spending most of them as Stephen Kenny’s right-hand man, he had the main responsibility for conducting sideline affairs trust on him when Kenny opted for the Republic of Ireland U21 job with the promise of succeeding Mick McCarthy as senior team boss in 2020. He would have John Gill as his sidekick and new American club owners to satisfy.

If his first Euro venture didn’t last as long as the better of Kenny’s, at least it wasn’t loss-making, Gary Rogers seeing to that with his penalty shootout saves. But all else has gone swimmingly for the man about whom a joker once said: “Why shouldn’t he be good, he has the capital of Western Australia named after him.”