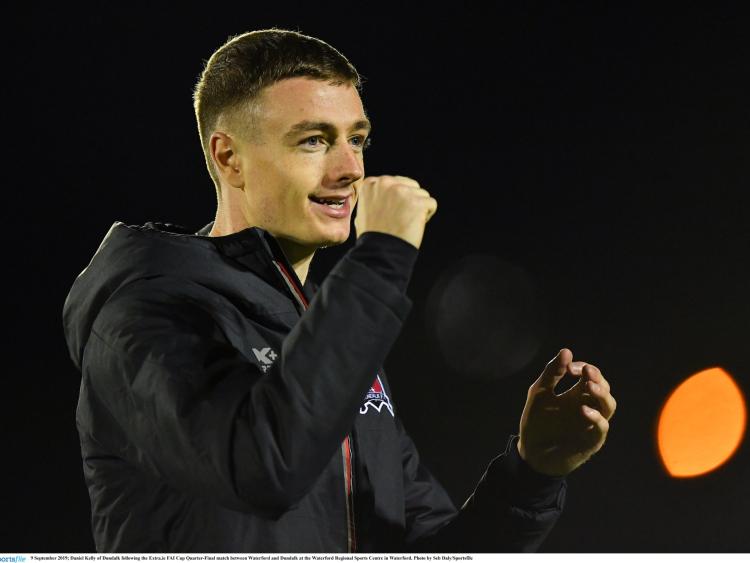 Daniel Kelly has revealed how Vinny Perth told him to “come here to win the league”. (Pic: Sportsfile)

Daniel Kelly has revealed how Vinny Perth told him to “come here to win the league”, and the ever-improving winger can do just that as Dundalk FC look to land their fifth title in six years in style against Shamrock Rovers at Oriel Park on Monday night (kick-off 7:20pm, live on RTÉ Two).

Since losing in Sligo in April – a night where they fell 13 points behind The Hoops – Dundalk have embarked on a record-breaking 28-game unbeaten run in domestic competition, which includes 25 wins.

They are undefeated in 22 league games, equalling a club record which they can now break on Monday. That’s a sequence that includes 17 clean-sheets, with 14 of those collected in their last 16, across a five-month spell that has blown Rovers and everybody else away.

Dundalk completed a 25-point swing on their closest rivals with a hard-fought 1-0 win over Waterford at the RSC on Friday, while on the same night in Dublin, Rovers were held to a scoreless draw by St. Patrick’s Athletic, leaving Perth’s side 12 points clear with five games to play. 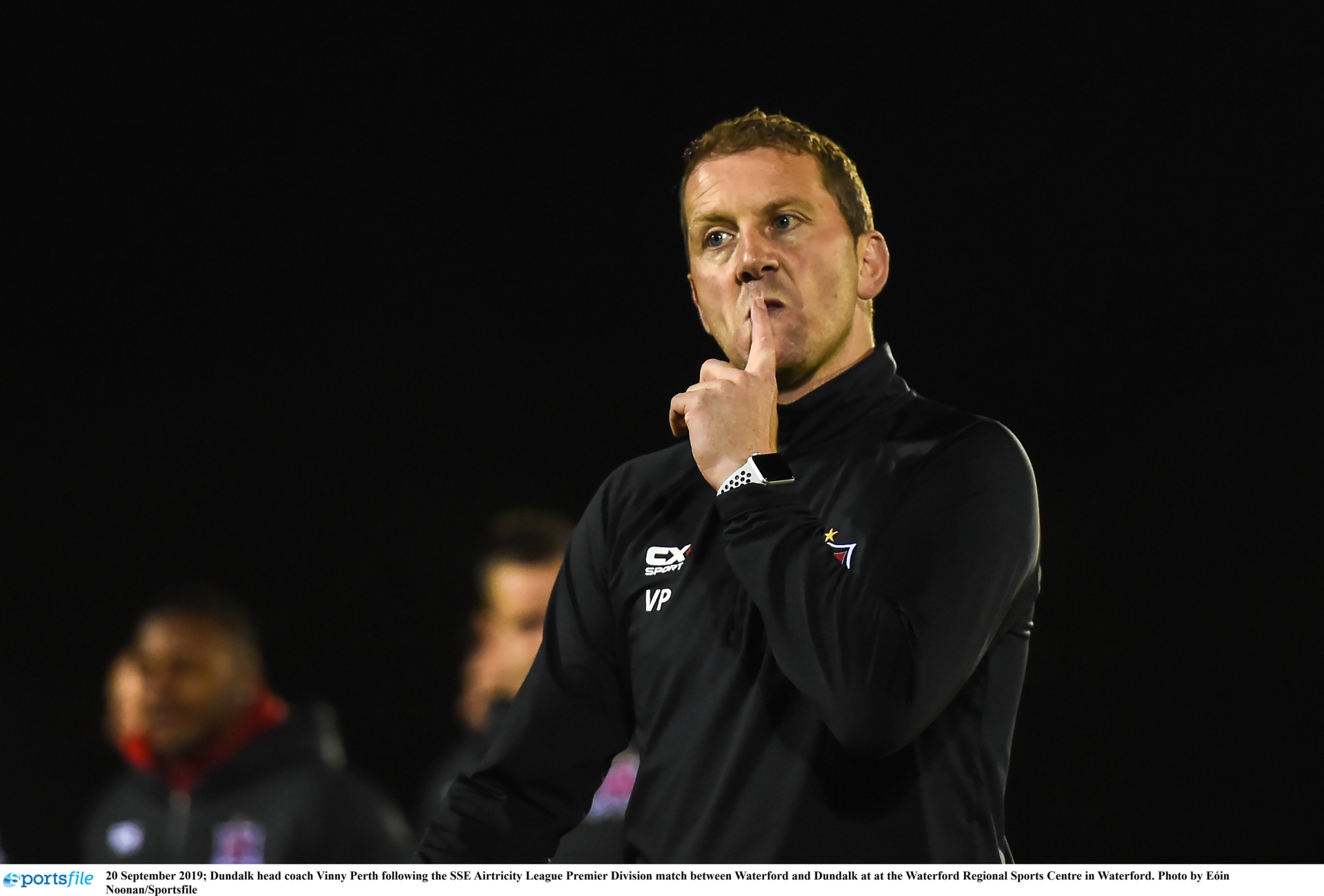 That means victory on Monday will crown Dundalk champions for the 14th time, and a draw would effectively do the same given that they have a 16-goal advantage in goal difference.

Perth will still be keen for his team to be the first to break 90 points in the League of Ireland, while also becoming the club’s widest-margin champions, with Dundalk’s 11-point win from Cork City in 2015 their biggest to date.

It is unlikely that they will touch Bohemians’ league record 19-point margin in 2008, a campaign where The Gypsies went 27 league games unbeaten (23 wins / 4 draws) between March and October.

It’s a year that Dundalk and their supporters should savour, and it is certainly one that Kelly is enjoying. First-team coach John Gill has termed the 23-year-old’s rise as “meteoric”, with this just his second season in senior football where he is on the verge of a first league medal.

“Everyone is feeling good – it’s something to look forward to,” Kelly – formerly of Bray Wanderers and Bohemians – said, looking towards Monday’s showdown. “I spoke to Vinny, he told me to come here to win the league. We have the opportunity to do it, so hopefully we can. 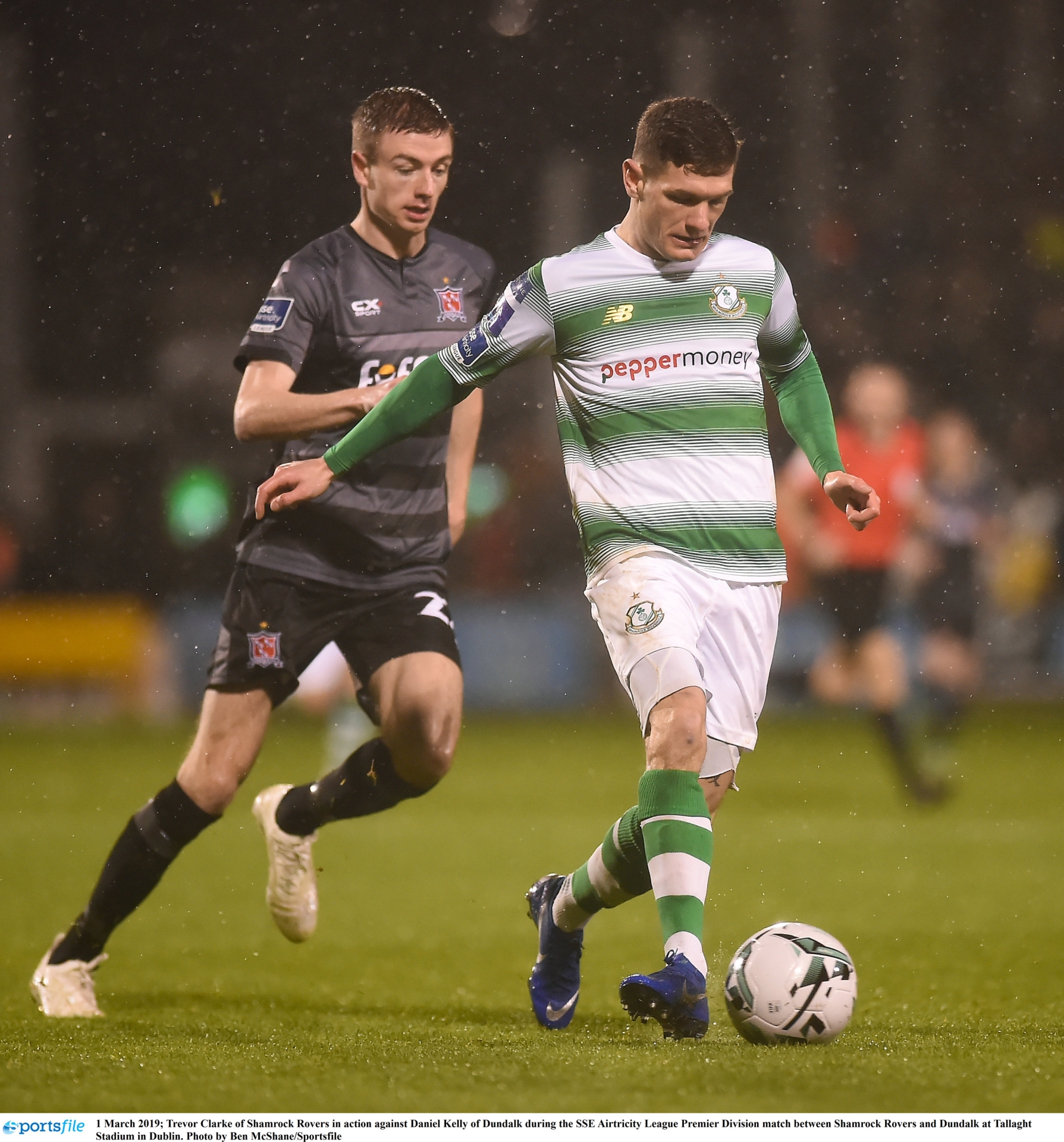 “We knew going down to Waterford, it was going to be a tough game. They are a decent side. We’ve done well against them this year. It’s a huge game now on Monday to put the league to bed – I can’t wait for it.”

Friday’s winner was Kelly’s 12th goal of the season in all competitions, six of which have come against Waterford, with the winger next aiming to hit 15.

“It’s not a bad return!” he smiled. “Vinny has been talking to myself and Michael (Duffy), and we’ve been adding goals to our game. I think the two of us are on 12 now; we want to keep pushing on, get a couple of more goals and hopefully finish the season strong.”

Dundalk also have an Extra.ie FAI Cup semi-final in Sligo on the horizon, next Sunday, but that is a huge tie that has had to be put to the back of their minds for now. Rovers face fierce rivals Bohs in the other last-four tie on Friday.

Perth has vented his frustration at their back fixture against The Hoops being squeezed into an already-hectic period, and midfielder Chris Shields says they cannot think about Sligo Rovers just yet as they first look to secure the second leg of the domestic treble.

“It’s the dream scenario, really, isn’t it,” Shields said on potentially winning the league in front of a packed Oriel Park.

“It wouldn’t matter who we’re playing on Monday – it’s about getting the points tally up and having it in the bag, which is hopefully what we’ll do. But we’re under no illusions, it will be a tough game and hopefully it will be some spectacle.”

While Dundalk are unbeaten in 22 league games, second-placed Rovers have won six and drawn three of their nine outings since going down 1-0 to the reigning champions at Tallaght Stadium in June.

Seán Gannon was the match-winner that day, and Dundalk also won the previous meeting, at Oriel Park in April, where Patrick Hoban and Michael Duffy scored in a dominant 2-1 victory – Orhan Vojic hit a consolation. In the other clash, in the capital in March, the teams played out a scoreless draw.

Dundalk are now unbeaten in almost 13 months in the league at Oriel Park, a run totalling 18 matches (15 wins / 3 draws), going back to a 2-1 defeat by Rovers on August 28 last year – after Dylan Watts scored a penalty deep into injury-time.

Their top-flight record for that, incidentally, is 25 games, between September 2013 and May 2015. Their overall league record is 27, achieved under Gill in the First Division between July 2006 and October 2007.

Dundalk have not conceded a home goal in the Premier Division since Bohs scored in the second minute on May 20, subsequently recording six straight clean-sheets there.

A reminder that Monday’s game kicks off at the earlier time of 7:20pm due to RTÉ’s live coverage.