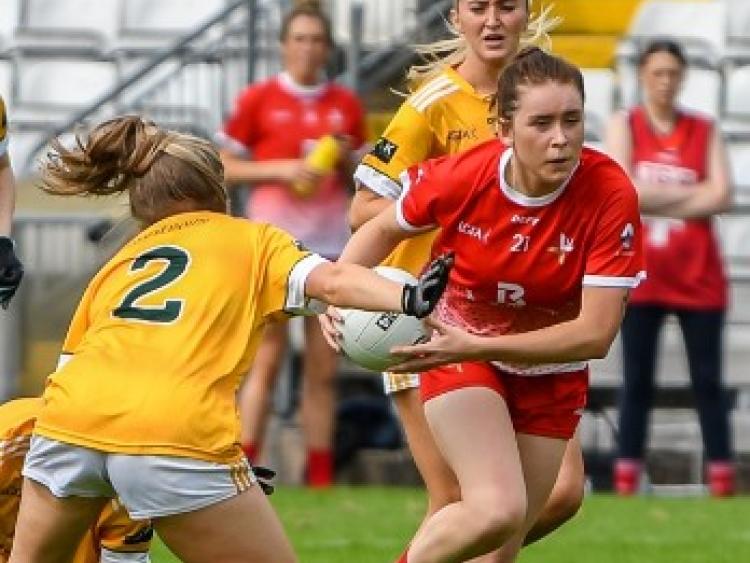 Aine Breen won an All-Ireland JFC medal with Louth on Sunday, but will line-out for St. Patrick's this weekend. (Pic: Warren Matthews)

St. Patrick’s midfielder Aine Breen says her side are aiming for a league and championship double in 2019, but recognises the challenge Naomh Fionnbarra pose to both aspirations.

The Lordship ladies face into Sunday’s intermediate final with the pain of last year’s defeat decider in mind, though they have hit a strong run of form which has led them to this point in the championship unbeaten.

Thus, they’re the fancied team to emerge from Sunday’s showdown with the silverware and a place in the senior grade next term. But Breen, having learned from prior experiences with Louth, has warned against complacency.

“We probably are the favourites, but you don’t want to get that in your head too much,” the county star told The Democrat.

“After losing the All-Ireland last year we probably lost a bit of focus and maybe the heads went down slightly. We went out against the Fechin’s and they wrote us off the pitch completely. But this year we’re determined to win it.”

Breen, an IFC winner with the Páirc Eamoin club in 2013, insists Pat’s must reach the senior ranks of both domestic codes in order to improve at the rate they wish.

However, it’s not that long ago since the picture looked bleak. Opening round league losses to both Barrs and Clan na Gael were far from ideal, but, in the long run, Breen feels they helped Pat’s refocus.

“It was actually something I think we needed. After last year, Mattock and Fechin’s were gone, we were like, ‘this is our year, we’re going to win’,” she said.

“The losses brought us back down to earth. I think the Clans scored eight goals on us in the first game so we knew we had to cop on a bit.

“But it was a shock the Finbarrs beating the Clans. The Finbarrs are very fit, very fast and pushing forward the whole time.

“I’m confident, but you can’t be cocky, there’s a job to be done. Things will be tight because they’ve come on. I think they got a buck when we went out and beat them in the championship first round. But they’ve since lifted their heads and decided ‘we need to push ourselves that bit harder’, and they have done.”