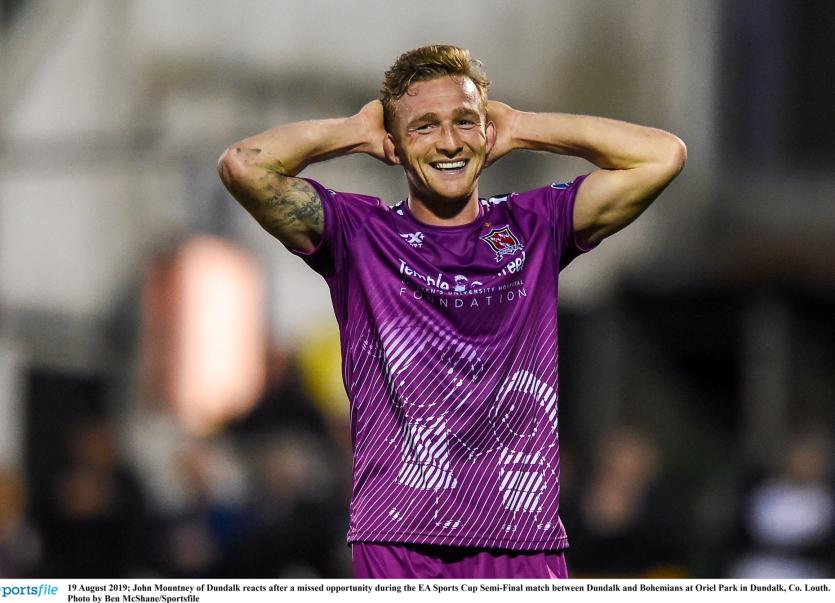 Vinny Perth says that Dundalk FC “don’t believe in a first team”, with every squad member of equal value, as he revealed his hope that winger John Mountney will play again this season after undergoing minor surgery.

Perth made seven changes for last Friday’s 5-0 hammering of UCD in Dublin and four more as Dundalk extended their unbeaten SSE Airtricity League Premier Division run to 20 games with a professional 2-0 win over Sligo Rovers at The Showgrounds on Monday.

It has been a regular feature of Perth’s first season at the helm and he says it is down to the strength of the squad at his disposal, with every player seamlessly integrating into each system he selects.

“We don’t believe in a first team and that’s down to the level of support that we’ve had from the owners of the club,” the head coach said after Monday’s win. “They have really backed us as a team and the players have responded. “Nobody sees themselves as a number two or a second choice. They see themselves as first-team players and that’s what we want to create.”

Mountney was forced off after just four minutes of last week’s visit of UCD to Oriel Park, where he suffered a metatarsal injury similar to the one sustained by Patrick McEleney on the opening day of the season against Sligo.

Perth believes it is not as serious as McEleney’s and hopes the Mayo man may return to running in around four weeks. Mountney’s regular replacement Daniel Kelly, meanwhile, came off at The Showgrounds after 72 minutes with a dead leg.

“No, he’s not out for the rest of the season,” Vinny said on Mountney, who went for surgery on Monday. “It’s minor enough surgery. It could be anything from 6-9 weeks and he could be back running after four weeks.

“It’s not the first time it has happened us this year. We’ve had the exact same injury twice. A little bit less than what Patrick’s was, but the surgery was only a clean-up thing. He’s going to be in a boot for a couple of weeks.

“John will be back and we expect him to play a couple of games before the end of the season.” Dundalk’s campaign, of course, is likely to extend into November now with a Unite the Union Champions Cup tie against Linfield, as well as perhaps the Extra.ie FAI Cup final.

The reigning champions are now just four wins away from retaining the league title, which they are looking to land for the fifth time in six years. Perth believes the win in Sligo was one which displayed them to be in rude health.

He said: “It was one of our better performances this season, I thought. I was really, really impressed with the level of professionalism that the lads showed today, but it was more than that – you wouldn’t tell this is our eighth game in 23-24 days.

“We were really, really hungry and fresh, and our level of pressing was outstanding. I’m very proud of the players and I have to give them all the credit. They have to get back on the bus tonight, spend another four hours going home and they have to recover tomorrow. Full credit goes to them – they have been marvellous.”

Sligo had been unbeaten in ten league games at The Showgrounds, stretching over five months, which started with a 2-1 win over Dundalk on April 12 – The Lilywhites’ last domestic defeat.

“I think the Monday night, there probably wasn’t as many in the ground as there normally is and it wasn’t that atmosphere that gives people energy – especially after they were down in Cork the other day. That helped us, in that sense.

“But I thought our players were so hungry, so motivated and they were outstanding.”

Dundalk now prepare for another crucial double weekend where they look to open up a ten-point lead at the top of the table when struggling Cork City are the visitors to Oriel Park on Friday, before they make the trip to Waterford for their Extra.ie FAI Cup quarter-final at the RSC on Monday.