Dundalk FC's mantra is simple: 'We just need to keep winning every week' 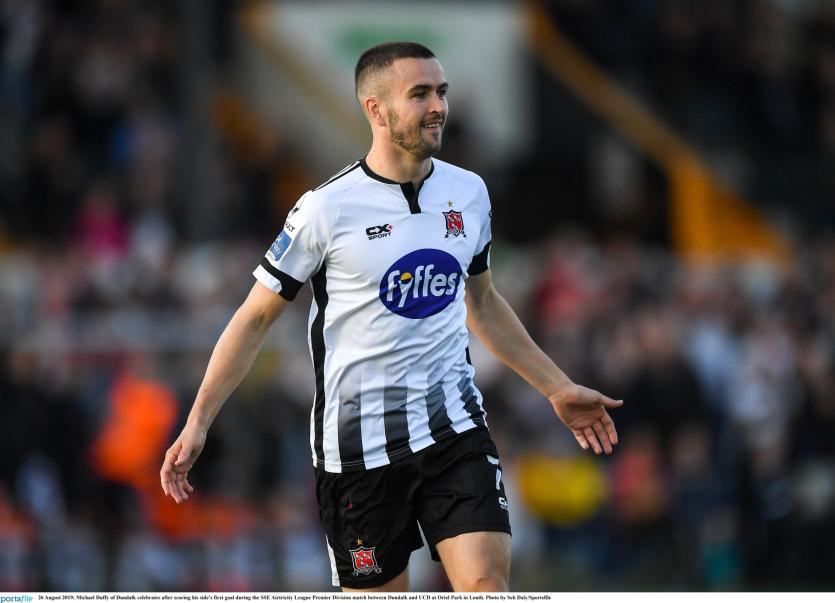 Michael Duffy is hoping to “build on” his confidence-boosting brace and assist as leaders Dundalk FC moved a step closer to retaining the SSE Airtricity League Premier Division title with a routine 3-0 win over UCD at Oriel Park on Monday night.

Duffy opened the scoring with a third-minute 25-yard stunner, which he says he is “looking forward to seeing back”, and he quickly added a second with a close-range finish in the 19th minute.

The winger added an assist before half-time as he set-up Patrick Hoban to make it 3-0, which put the result beyond doubt and sent Dundalk seven points clear at the top once again, for 24 hours at least.

“It was a good performance. We needed to get the win and that’s what we did. We just need to keep winning every week and we’ll focus on the next game now,” Duffy said, speaking shortly after full-time.

“I was happy with my performance. I want to score every game. I’m looking forward to seeing the first goal back because it happened so quick. I’m delighted with that. That’s what I want to do – score and set up goals every game, and hopefully I can build on that. 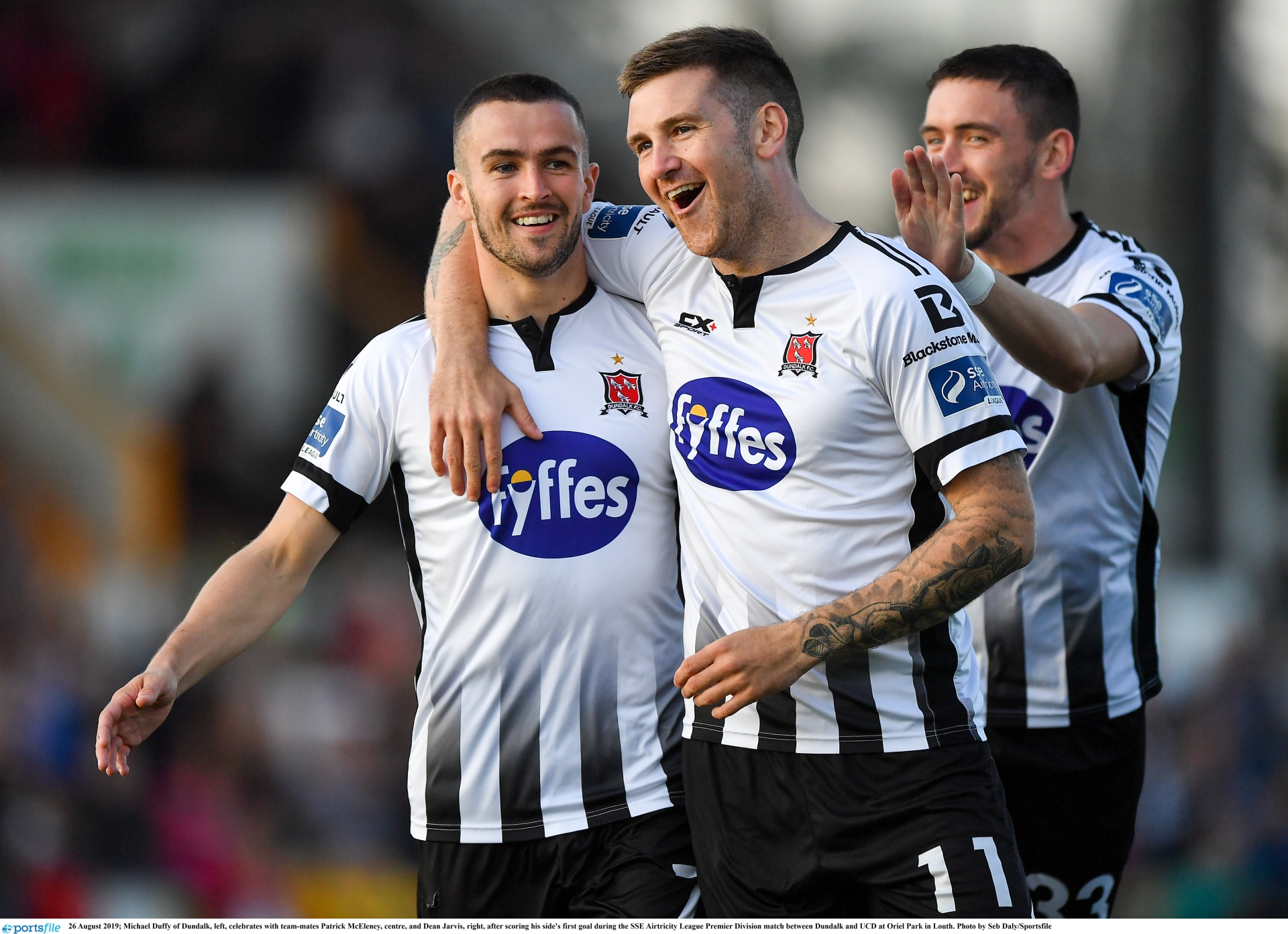 “It was a frustrating second half; they sat in. We kept good possession but the game was sort of dead. But, look, we got the three points and that’s the main thing.”

Dundalk went into Monday’s match having gone through a 120-minute battle with Derry City in the Extra.ie FAI Cup only 72 hours earlier, and Duffy admitted: “It was difficult.

“There were a few tired legs, but the boys have been preparing well for every game. We have been professional about it because there have been a lot of games, and there is going to be. It’s on to Friday now.”

The reigning champions now face into another double weekend, with a trip to the UCD Bowl on Friday quickly followed by another league clash in Sligo on Monday.

It was men against boys at Oriel Park, but Duffy knows The Students – who are stranded at the bottom of the table – may be a different proposition in their own backyard, having knocked St. Patrick’s Athletic out of the FAI Cup there at the weekend.

“It is weird,” the 25-year-old agreed, as they prepare to face the same team for the second time in four days. “But it’s just the way the league is this year; there are so many games and a lot of games were getting postponed. We’ll just take it as it comes. 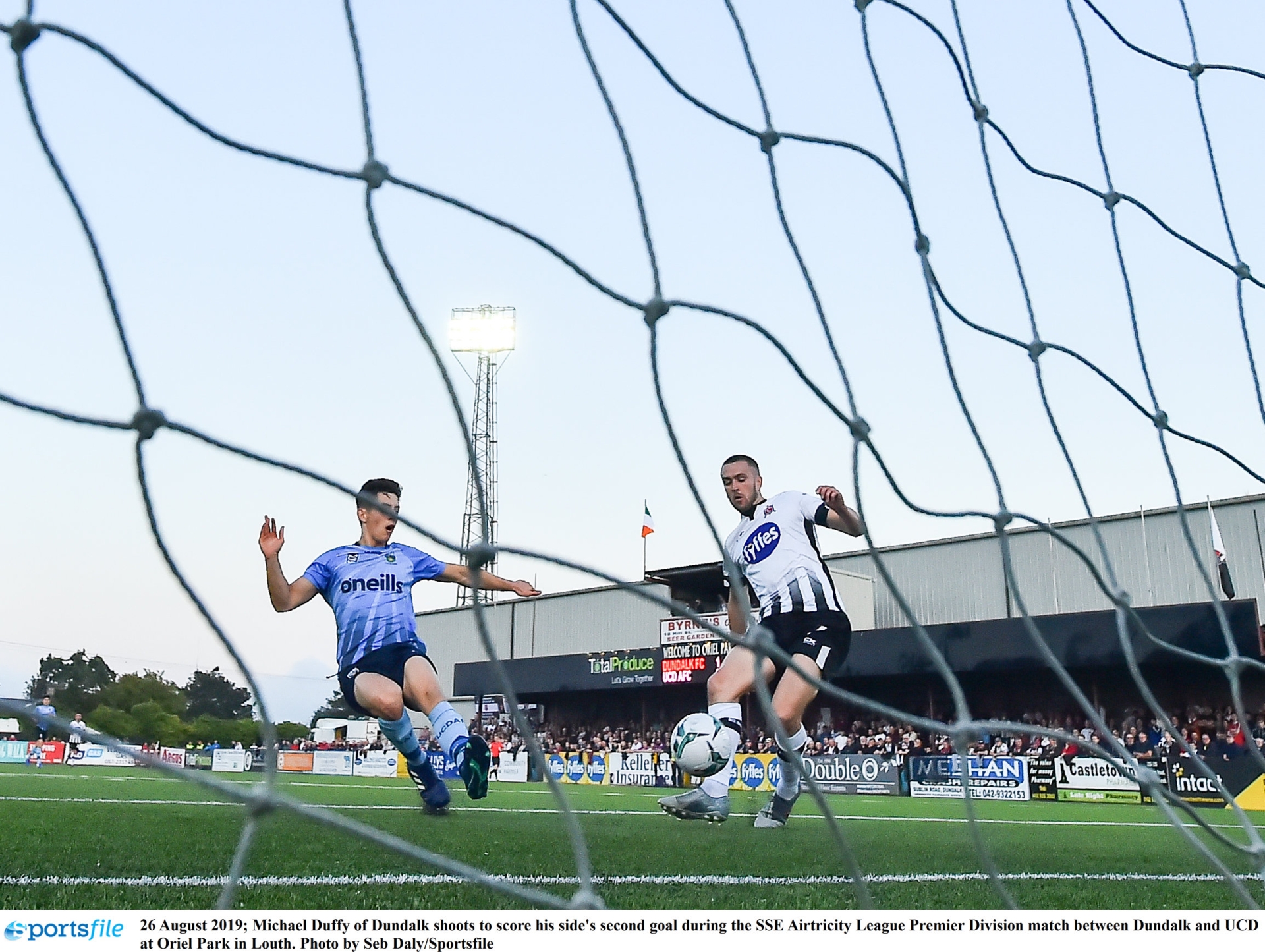 “They might be different. Obviously, they will go and assess tonight’s performance and try to work on it for Friday. I’d imagine it’s going to be a tougher game.”

Six more wins, at most, would guarantee Dundalk a fifth title in six years, but Duffy stated: “I actually didn’t even know that. We’re just taking it game by game – we’re just worrying about Friday now and getting the win there.”

On Monday morning, Dundalk were paired with Waterford in the quarter-finals of the FAI Cup, a tie which is unlikely to take place on the allocated slot of the weekend ending September 8.

Speaking on the draw, Duffy said: “It’s a tough draw. Waterford away is a tough draw for any team, coming now at the quarter-finals. We’ll be looking forward to it, but we’ve got a few important league games before that.”