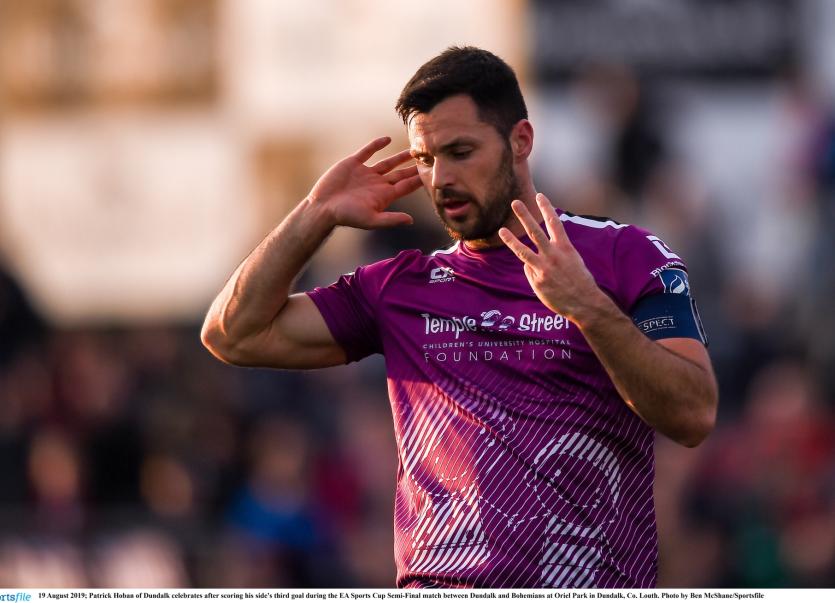 Patrick Hoban bagged a fabulous four as the Temple Street Foundation banked €600, after Dundalk FC set-up a possible EA SPORTS Cup final at Oriel Park with a 6-1 win over Bohemians on Monday night.

The almost full-strength SSE Airtricity League Premier Division leaders put their lesser opponents to the sword in the opening quarter-hour as Hoban silenced his doubters with a clinical 11-minute treble.

Dundalk meant business from the get-go and, after Hoban tucked away a Michael Duffy assist, they quickly added two more through their record goalscorer in a scintillating spell.

Patrick McEleney scored a fourth before the break, and Hoban quickly hit a fifth shortly after the restart.

Bohs did grab a consolation through Ross Tierney, but former Gypsy Daniel Kelly soon made it 6-1 on a night where Dundalk made a real statement in their pursuit of the domestic treble, which has only once ever been achieved – by Derry City back in 1989. 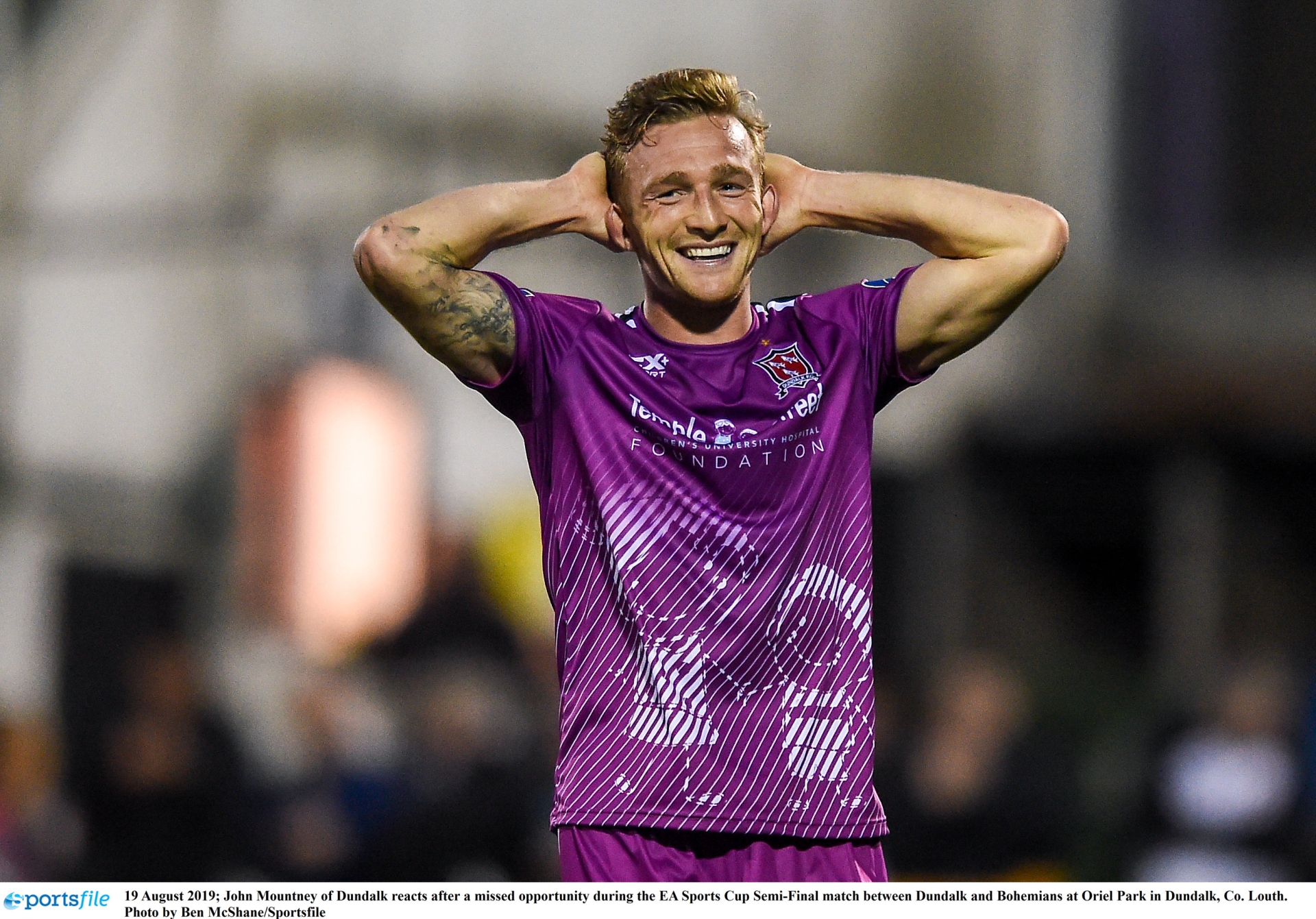 Bohemians went into the game without their influential goalkeeper James Talbot, who had accumulated five yellow cards, and their boss Keith Long may have been caught by surprise with Dundalk’s team selection.

Among the interested spectators at Oriel Park on Monday were Derry trio Declan Devine, Kevin Deery and Paddy McCourt – ahead of Dundalk’s Extra.ie FAI Cup second-round clash in the North on Friday night – and they and Long may have expected to see a more mixed Dundalk team.

However, having rested a number of players for the weekend league thrashing of Finn Harps, Lilywhites head coach Vinny Perth recalled his stars, with Hoban joined by Seán Gannon, Andy Boyle, John Mountney and Jamie McGrath in the starting XI.

The treble-chasing Louth men opened the scoring inside four minutes when Michael Duffy played in Hoban and, with just goalkeeper Mick Kelly to beat, he slid the ball to the corner of the net with a clinical finish.

Dundalk quickly hit a second in the ninth minute with another good finish from Hoban, who completed his hat-trick on the quarter-hour with a brilliant header from a Daniel Cleary cross.

It was 4-0 three minutes before half-time when McEleney – having netted a brace against Harps on Friday – weaved his way through and finished to the net. 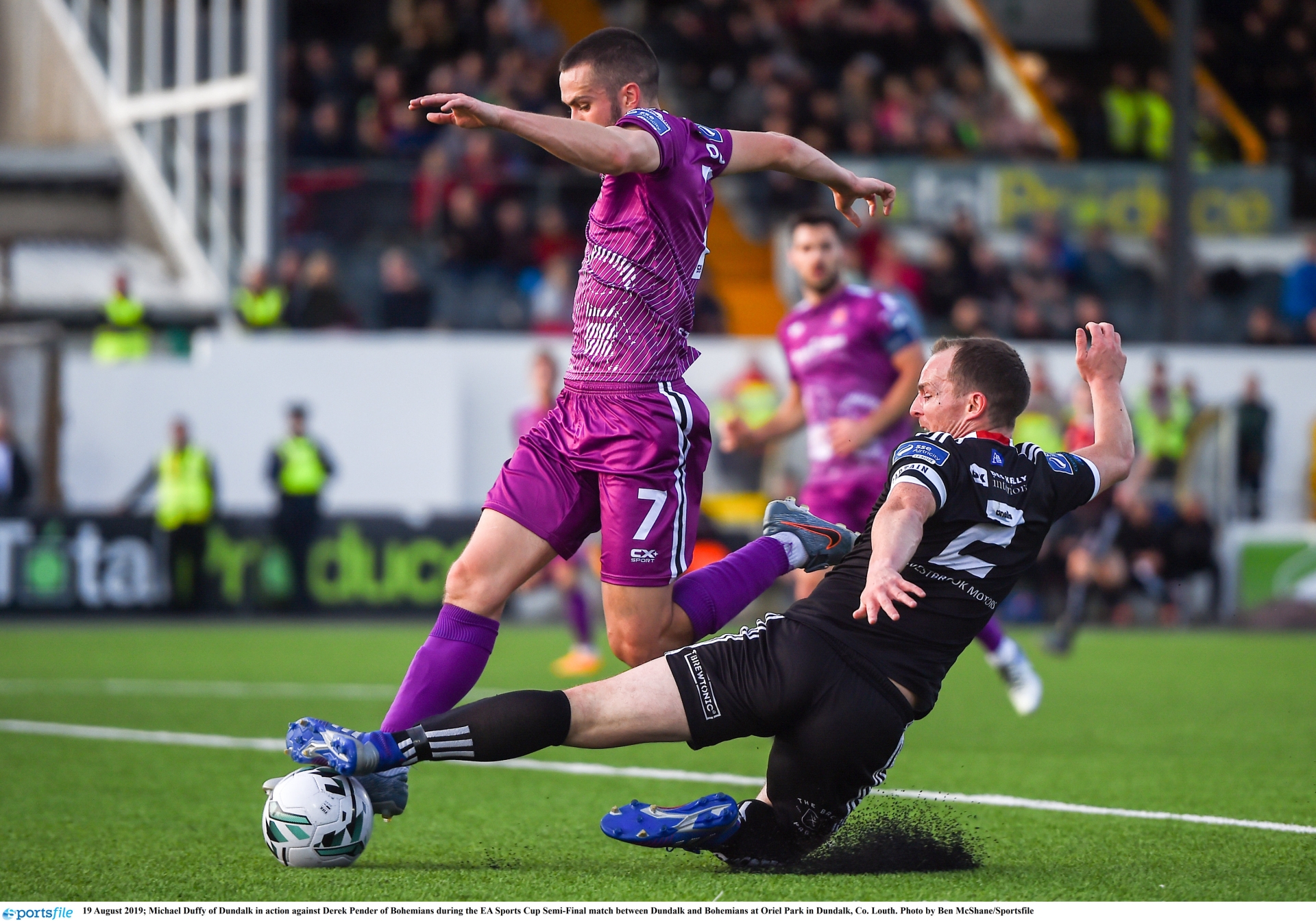 Early in the second half, it was 5-0 when, after McGrath was denied, Hoban hit his fourth of the evening on the rebound.

Perth was allowed the luxury of taking off McEleney and Duffy, as Daniel Kelly and Seán Murray came into the fray.

Bohs scored a consolation just past the hour-mark when Ross Tierney hooked the ball to the net from close.

Hoban could have had his fifth of the evening shortly after but 'keeper Kelly tipped the ball behind. However, it was 6-1 with 20 minutes remaining as Daniel Kelly slotted in from McGrath’s assist.

Dundalk’s red-hot no9 was substituted with a quarter-of-an-hour remaining, and his replacement Georgie Kelly could have added a seventh for the hosts in the 78th minute but the 'keeper saved well.

Bohs, really, were lucky to escape with only conceding six, as The Lilywhites sauntered into an 11th League Cup decider.

In the league, Dundalk’s lead at the top of the table was reduced to just four points as Shamrock Rovers easily beat Waterford at the RSC.