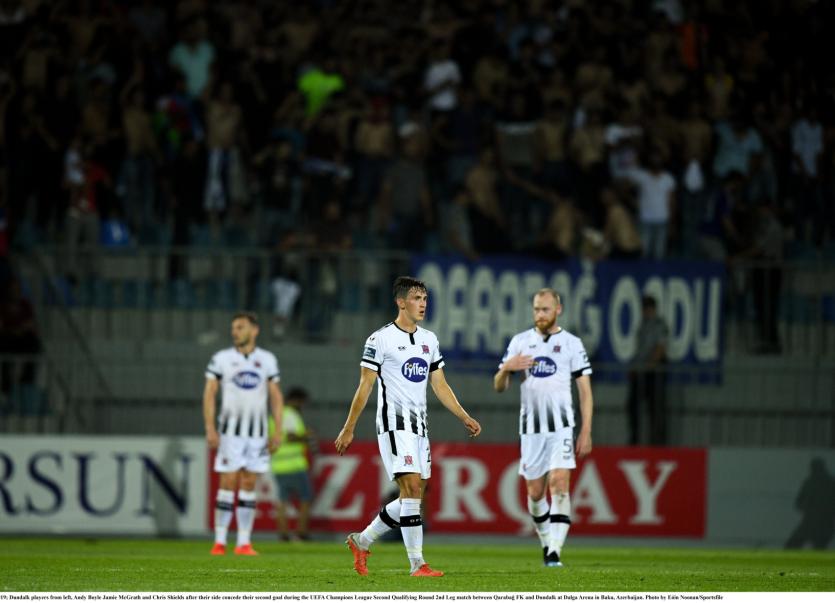 Dundalk FC’s UEFA Champions League dream was extinguished in the Land of Fire after they went down 3-0 to Qarabag (4-1 on aggregate) in the second qualifying round at the Dalga Arena in Baku on Wednesday night.

In already-sweltering temperatures of 27 degrees in the Azerbaijani capital, Qarabagh immediately turned up the heat as Mahir Emreli broke through on goal in the first minute, but Gary Rogers produced a stunning stop to touch the shot wide.

Dundalk did steady the ship, somewhat, with three successive corners. However – after Míchel had headed off the bar – the hosts deservedly hit the front in the 12th minute as Jaime Romero’s arrow flew into the bottom corner.

Jaime Romero beats Gary Rogers at the near post to give the home side the lead.

Croatian midfielder Filip Ozobić had impressed in the opening stages and The Lilywhites were relieved to see him withdraw through injury before the half-hour.

Dundalk were happy, too, to get to the break trailing by just a single goal. But just seven minutes into the second half it should have been 2-0.

Rogers was brave at the feet of substitute Dani Quintana, but Abdellah Zoubir really should have scored with the follow-up, only to allow Daniel Cleary time to get back and steal the ball.

The Irish champions might have levelled the tie midway through the half, but Patrick Hoban’s backheel was gathered on the line by Vagner. It was, by far, their best opportunity of the night.

However, the outcome was put beyond any doubt in the 76th minute when left-back Ailton stayed up with an attack and headed in Maksim Medvedev’s accurate cross. There was further salt rubbed into a wilting Dundalk’s wounds three minutes from time when Romero’s shot deflected past Rogers, as Qarabag set up a date with APOEL. 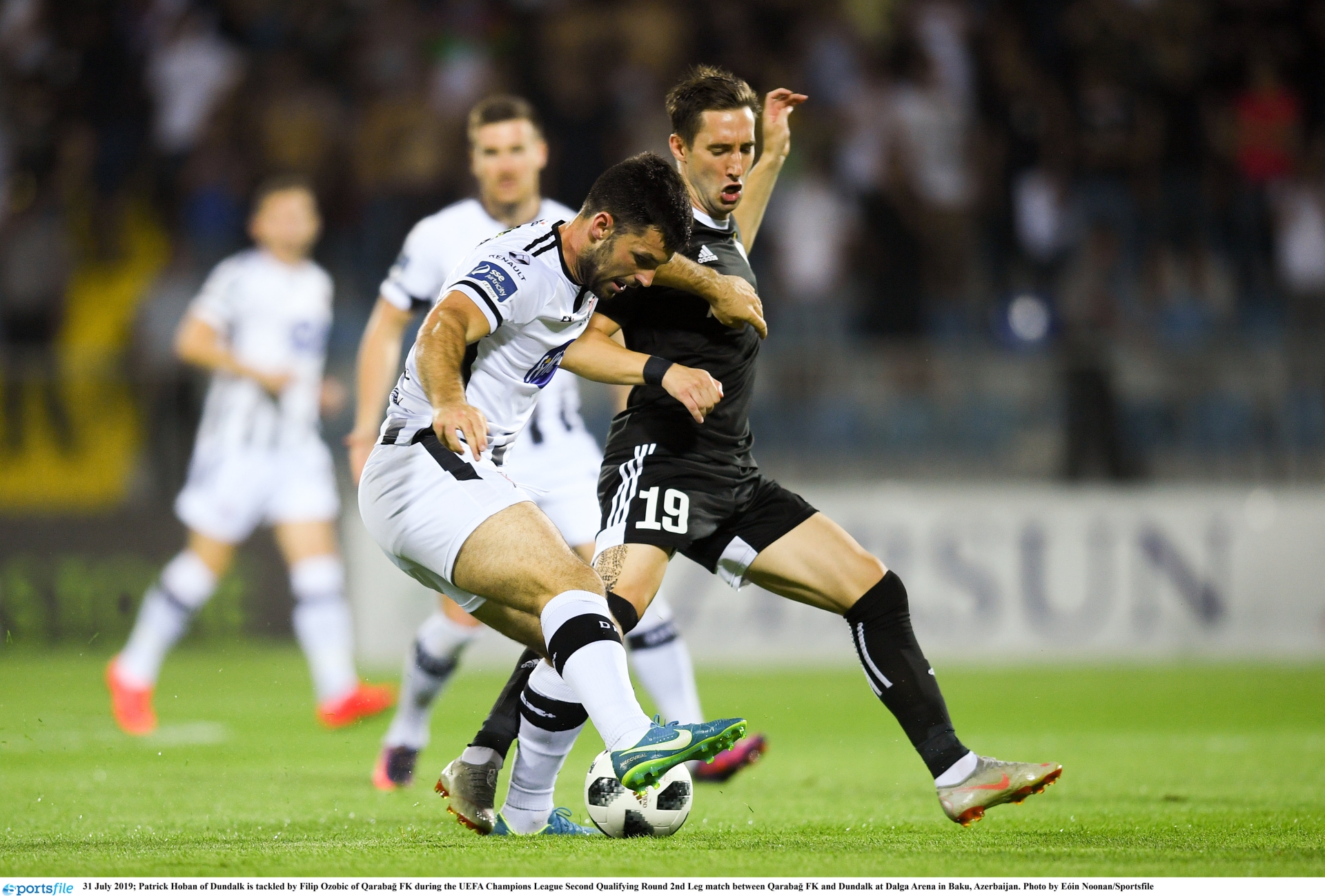 For the battle in Baku, Dundalk head coach Vinny Perth had made just one switch to his team from the opening leg, which ended 1-1, and it was an enforced one as the injured Robbie Benson (ribs) was replaced by Cleary. Seán Hoare took up a midfield role in his absence.

Qarabag boss Gurban Gurbanov, meanwhile, made two changes to his midfield, with Míchel and Ozobić – both unused substitutes in the first leg – coming in for Simeon Slavchev and Gara Garayev, who dropped to the bench.

Straight from the kick-off, Qarabag were almost in front when Ozobić’s delightful through-ball put Emreli through on goal, but the No.11 – who scored in the fourth minute at Oriel Park – was denied by a brilliant touch from Rogers. From the corner, Rahil Mammadov flashed a header wide.

Dundalk then calmed the storm with three successive corners; the last of those saw Michael Duffy’s delivery met by Hoare but the header was straight at Vagner. A minute later, Qarabağ went close again as Míchel headed Ozobić’s corner off the top of the crossbar.

Eventually, the pressure told on 12 minutes when Ozobić and Zoubir combined beautifully, with the latter laying the ball off to Romero who rifled a 20-yard shot past Rogers.

Perth’s players did settle, without threatening a response before the half-time whistle – their sole shot, Patrick McEleney’s attempted special in the 37th-minute, flew high into the stands. 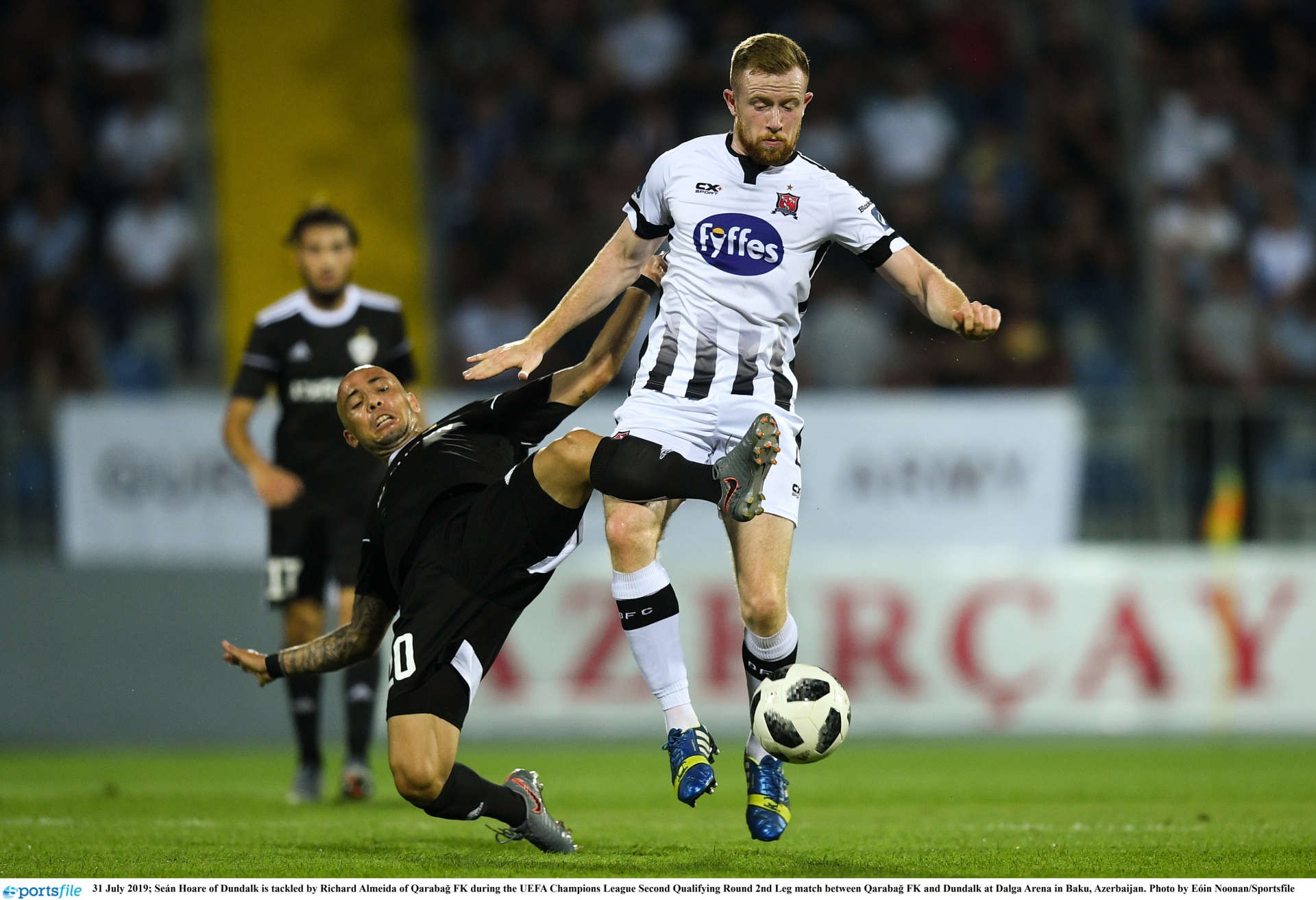 Dundalk had a huge let-off in the 52nd minute when Qarabag had numbers over. Zoubir, with space, played in Quintana whose touch allowed the alert Rogers to claw the ball away at his feet. Zoubir picked it up in the box, but with a seemingly easy task to score, Cleary nipped in to steal possession and clear the danger.

Seán Murray was then introduced for Hoare, but it was Qarabag who continued to be much the more threatening and the game was killed off with 15 minutes remaining. Duffy’s clearance from the byline only found Maksim Medvedev and, in space, his pinpoint cross was met by Ailton’s clinical header to end hopes that Dundalk still harboured.

Qarabag added a third in the 87th minute when Zoubir raided down the left and pulled the ball back for Romero whose shot from just inside the area took a deflection on its way past Rogers.

Jaime Romero nets his second goal of the night to wrap up the tie.

The Oriel Park outfit remain in continental competition through the Europa League, with a trip to Slovakia’s capital Bratislava in a week’s time now next on the agenda for Perth and his team.