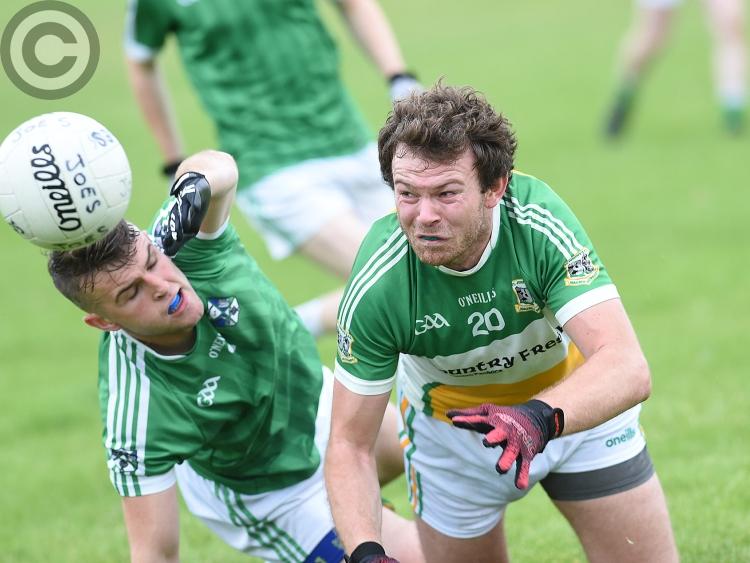 Geraldines diced with disaster, but whether it be through a bad bounce of the ball or disbelief St. Joseph’s were unable to capitalise during the game of the round at Páirc Clan na Gael.

Joe’s, hugely unfancied in advance of the Sunday evening tie, were level twice during the final quarter without being able to summon something to produce a lead.

Craig Doherty was the match’s standout performer and he led the Dromiskin/Darver men back into the game in the second half. Had he been accompanied by the injured Conall Smyth in attack the outcome may have been different.

In saying that, Gers probably did just enough to earn a knockout stage berth, following last season’s demotion scrap. Jim McEneaney’s goal shortly before half-time gave them an impetus which Joe’s simply couldn’t find. It always seemed likely to be the crucial score in a game of fine margins.

Eamon Dunne’s team also got the rub of the green where referee Noel Hand was concerned, and Joe’s weren’t shy in making their dissatisfaction known, often to their detriment with a few of Gers’ eight pointed frees having been moved forward.

The subsequent quarter-final draw pitted Geraldines against Ardee St. Mary’s, in what promises to be a classic. The most attractive element of which is a mutual trait of the teams, in that they tend to leave opposition in games they ought to have no right even being in.

Take Gers after 15 minutes as an example. They were 1-3 to two in front, having conceded the opening points. Foot on the throat time you’d imagine, yet three of the following four scores were managed by Joe’s, who hung in as they typically do.

Again, 1-7 to six in front at the break, could Gers pull away and stamp some authority? No. Peter Brennan, Alan Quigley and Oisín McGuinness points had the gap back to one - a common divide as the second half progressed and the sides traded evenly.

Ultimately, after Quigley had nailed a pressure free, Gers prevailed through Ben Mooney and McEneaney points, but there was a touch of St. Mary’s about their failure to progress convincingly.

Tinder couldn’t have found them a better quarter-final match.