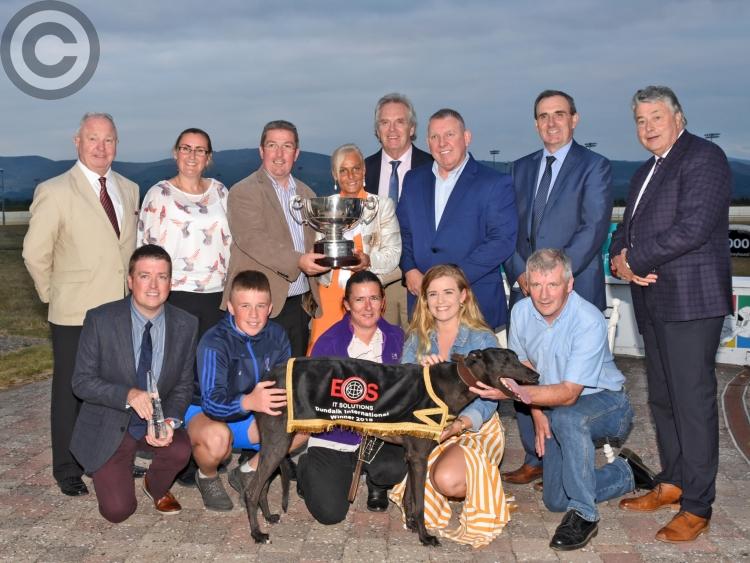 There may be a strong ‘home’ feeling attached to the this year’s Dundalk International, all of the sextet lined up for Friday night’s renewal trained in this country, but it still includes runners of outstanding quality.

Take Ballymac Arminta, for instance. No bitch has ever run faster over the 525 distance than the County Kerry-owned and trained runner. She sped around Shelbourne Park in 27.70, which is only three spots slower than Paradise Madison’s track record.

That was in the recent semi-final of the Sporting Press Irish Oaks, and not surprisingly, Liam Dowling’s Ballymacelligot-based runner was a warm order in the decider. However, perhaps feeling the effects of a tough campaign, Arminta couldn’t mix it with the Cork runner, Killmacdonagh.

Now she has the chance to gain revenge. The pair renew rivalry at Dowdallshill on Friday night, and that is just one of the €20,000-to-the-winner race’s sub-plots. Another has last year’s Irish Derby winner, Ballyanne Sim, in competition with the winner of this year’s English equivalent, Priceless Blake.

Skywalker Logan, who was a close-up third to Priceless Blake in the English decider – run at Nottingham for the first time – is also in the line-up, while the field is completed by Gurteen Feather, trained in the midlands by David Murray.

It was hoped to have Droopys Verve back to defend his title, but like other top-flight English runners - beaten English Derby favourite, Magical Bale, among them - the Angela Harrison-trained champion is being kept at home with a view to contesting the prestigious, but less valuable, Select Stakes at Nottingham and then travel over for a tilt at the Irish Derby.

The draw – being made this Tuesday morning - will play an important part, as, in- deed, will the break. There’s a short run to the first bend, and getting there in front can be a race-winner. Think back to the night Quail Hollow last brought a win to this area.

Kieran Lonergan’s home-bred was gone from four before the others got properly into their stride, and the Castleblayney runner never saw an opponent after that, coming home a clear-cut winner of the 2012 renewal.

It’s difficult to judge a trial, especially a solo, but Ballymac Arminta looked really smart in her first look at the track last Friday night. And the time was there to demonstrate how well she had taken to the place. Droopys Roddick, title-winner two years ago, covered the 550 in 29.40 – on Friday night, Ballymac Arminta came in with 29.37, while in another trial, Priceless Blake clocked 29.68.

The flying Kerry runner is taken to be first bitch to win since Skywalker Queen won for County Tipperary trainer, Frances O’Donnell, and Englishy owner, Raymond Patterson, 10 years ago.

Won’t lack for knowledge of the circuit. Reached the third round of the Irish Sprint Cup last year, and in preparation for a challenge for English Derby honours this year was back at Dowdallshill for a second attempt for Sprint honours. In between, his career reached its pinnacle, the Wexford-owned runner racing to a superb win in the Irish Derby final, finishing just ahead of Magical Bale.

The youngest in the field, and going on the clock, the fastest. Scorched the Shelbourne circuit with a series of scintillating runs in the recent Irish Oaks, but when odds-on missed out in the final. Any doubts about her wellbeing were dispelled with a record run in a trail at Dundalk last weekend. Represents one of the country’s most powerful kennels, which challenged for International honours with the mighty Ballymac Matt.

Likely to be the outsider of the party, but in terms of consistency this veteran tracker has it all. Trained by David Murray, whose father has four Internationals to his credit, the four-year-old won the Plate on last year’s Derby final card, clocking just two spots slower than Ballyanne Sim. He later reached the St. Leger semi-final at Limerick. Stumbled on leaving traps in a Dowdallshill solo, but still clocked a respectable 29.65.

Played second fiddle to Ballymac Arminta, more or less, in the recent Irish Oaks - until they got to the final. Then showed her true worth, taking an early lead, and after being passed in the back straight, battled back to finish five lengths clear of her nearest rival, with Ballymac back in fourth. Already the winner of the Limerick Oaks and a finalist in the Cork equivalent.

PRICELESS BLAKE
(Laughill Blake-What A Diva) October ’16
Won three rounds of the English Derby, before performing a semi-final miracle to reach the decider. At his very best when it mattered most. Going off a well-backed outsider, Paul Hennessy’s charge made the early running, and had enough in reserve to hold off all challengers, Skywalker Logan among them. Trainer Hennessy has twice tasted International success, including with Priceless Sky, running in the same ownership as this year’s representative.

Trainer Patrick Guilfoyle handled one of the great International performers, dual winner, Definate Opinion, while owner Raymond Patterson was on the mark with the Matt O’Donnell-handled Skywalker Queen. Logan has competition wins and some very fast times to his credit, and after breaking the track record in the opening round was made favourite to win the English Derby. Ran excellently to take third in the final.