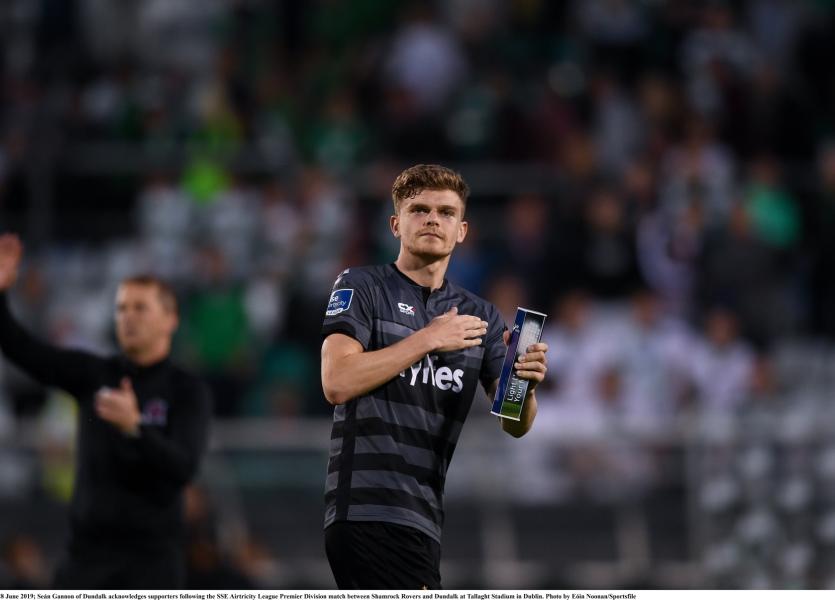 Seán Gannon has spoken positively about Dundalk FC’s desire to return to European group stage football, stating that “you may as well not be in it” if there is no belief that the heroics of three years ago can be repeated.

The summer of 2016 provided lifelong memories for Gannon and his team-mates – many of whom remain at Oriel Park – and there is no questioning that hunger for more of the same still rumbles with the country’s best right-back.

Gannon – who celebrates his 28th birthday on Thursday – undoubtedly possesses the quality to have made a career at a higher level. However, he has committed to the League of Ireland where he will go down in history as one of its most decorated stars.

He has won it all, including five of the last six Premier Division titles on offer, and his winning mentality is evident when he discusses Dundalk’s latest European adventure, which gets underway against Latvian champions Riga on Wednesday night (Oriel Park, 7:45pm – live on RTÉ Two).

“That’s the aim. We’ve done it before. There is absolutely no reason why we can’t do it again,” Gannon says, asked if reaching the group stages – of either the UEFA Champions League or Europa League – is a doable mission. 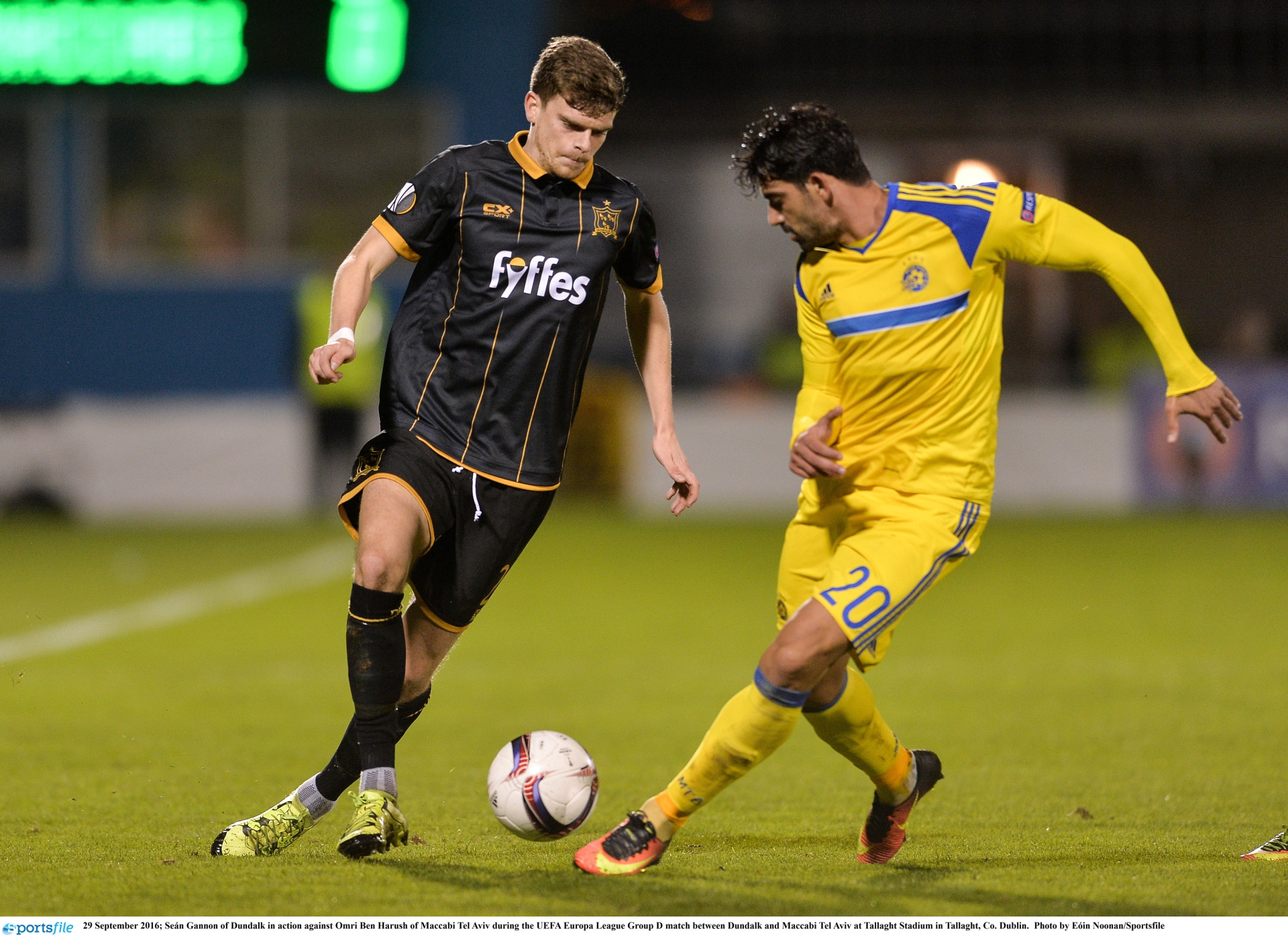 “It’s a target of ours to do well in Europe and we have to be going into the European games thinking like that. There is no point being in it if you’re not looking to progress.

“You may as well not be in it if getting to the group stages is not your aim. There is no point being in the tournament, really. A good chunk of the squad that is here have played in the group stages before and know what a great experience it was. We all want to get back and do that again, 100 percent.

“It will definitely be tough because every team that you play are going to be really good, but we’re a really good team ourselves. We need to be going into this European campaign looking to progress, and that is the way we’ll be looking at it.”

In his personal life, Gannon has been moving house over the past week, and he is hoping that it is a case of ‘home sweet home’ when it comes to Oriel Park.

The club will again be forced to play any later rounds in Dublin, but for now, the Carrick Road setting qualifies. Hajduk Split – in Gannon’s first year, 2014 – are the only team to win a European game there in seven attempts since he signed, and he hopes that home comforts continue.

However, he insists that tie five years ago, in particular, gives plenty of encouragement for the away leg, whatever the scenario.

“Our home form has been good,” he notes, with one eye on this year’s league results, where Dundalk are unbeaten in their 12 home outings.

Vinny Perth's take on the clash with Riga - here

“Obviously, Hajduk Split are the only team to win in Oriel, yes, but we went over to Croatia and beat them away, so if it doesn’t go our way on Wednesday night, we’re more than capable of going to Latvia and winning the game.

“But we know playing in Oriel, the way the crowd gets behind us in the European games, it’s packed to the rafters – I don’t think there’s a ticket to be got. That’s great as players knowing that you’re going out in front of a packed house, and it’s live on TV, playing in the Champions League.

“We definitely want to win the game in Oriel, 100 percent – that’s our target, to win, and being at home first gives us a chance to get a good result on the board going over to Latvia.”

Dundalk have not been defeated in three months – totalling 16 games in all competitions – but only in recent days have they been able to focus on the Champions League.

The squad were at training on Sunday, which included video analysis of Riga, and Gannon was impressed by their opponents.

“Riga are a very good side,” he said. “We couldn’t do too much on them because of league games, but since then, we’ve watched them a lot.

“No matter who you play in the Champions League, it’s going to be a tough game because they’ve won their national league as well. We know it will be tough, but we’re going into the tie to win it.”

Gannon, though, is not certain that playing at home first is the most favourable draw.

“I’m not really too sure, to be honest,” he responded. “I think there’s probably advantages and disadvantages to both, really. I think the fact that we are at home, with the crowd behind us, we can really come out of the blocks and have a right go.

“Obviously, we’re in good form at the moment. We have a good home record this year, so we need to go into the game not thinking any differently. Obviously, we’ll have our homework done on them and our game-plan set up. We need to go out and get a good result to take over to Latvia.”

Last year, in the Europa League, Dundalk eliminated Levadia Tallinn before bowing out to AEK Larnaca in the biggest European defeat of the club’s golden era, going down 4-0 in Cyprus.

Gannon – who was only a half-time substitute in that drubbing – says the squad have moved on from that result, but that lessons can be learned.

“There are things that happened last year that we can rectify,” he said. “It was a bit of a freak game over in Cyprus, to be honest. I don’t think anybody would have expected it to go the way it did.

“Sometimes in football, it’s just not your day. On that particular day, it wasn’t to be for us. That’s in the past. We want to improve on how we did last year, so it’s all positive going into the game this week, this tie.

“Nobody is dwelling on what happened last year – it can happen to any team in football – and we need to make sure on Wednesday that we’re going into the game really positive and looking to take the game to them.”

Having trailed Shamrock Rovers by 13 points in the Premier Division on April 12, Dundalk have amazingly managed to open up an eight-point lead over the Hoops with just 12 games remaining.

That, one would think, would allow the Lilywhites to put even more into their European campaign. But Gannon insists that is not the case.

“I don’t think it matters,” he stated. “We’re professional players and I think the mindset at Dundalk is you treat every single game the same. That is probably why we’ve been successful over the past few years.

“Obviously, the players are different players than you’d be used to playing against, so you have to do your bit of homework. But it’s definitely being treated the same as a league game.

“I think when you go down the road of treating certain games differently than others, that’s when it can come back to bite you and that’s when you can end up slipping up.”