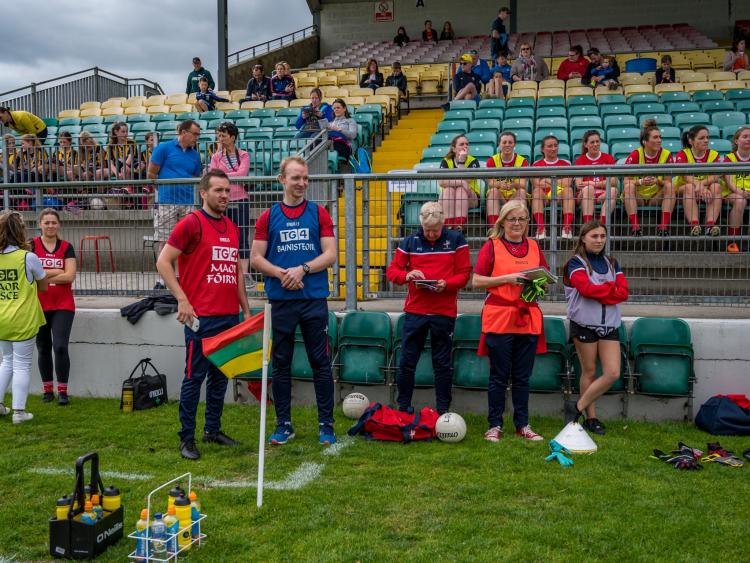 As statements go, this was quite something from Darren Bishop’s charges.

The closing margin may have been reduced to eight, but Louth were resoundingly comfortable in retaining their Leinster junior football championship title with the minimum of fuss.

And, in Lauren Boyle, the Reds have an asset of critical importance. Marked by several different Carlow defenders on the afternoon, when the supply was healthy, the diminutive No.13 made her mark, scoring 1-7 from play in a Player of the Match display.

It must, of course, be acknowledged that Carlow are not in the elite of this grade and Louth will ultimately be judged upon how they fare when pitted against the like of Fermanagh, Antrim or even London once the All-Ireland series gets underway.

Though there was a measured improvement in how they handled the occasion compared to the Division Four semi-final defeat by Antrim, where they appeared out-of-sorts and imploded approaching the finishing line.

“They know how to grind out a result; they’ve learned from their league semi-final defeat and thankfully they’ve progressed,” was Bishop’s view of his side’s short-term development.

In saying that, he was able to pick holes in elements of the performance. Selector David Shevlin insists that you will never reflect on a match and feel it was perfect, and Bishop tended to assess the game through a similar lens.

The wasting of up to four clear-cut goal openings prior to Boyle’s 29th minute hitting of the net was a rueful point. On another day, against different opposition, they will require a more clinical edge.

Although, given the lack of intensity to the affair, with the Wee County utterly dominant, it was inevitable to a degree that sloppiness would creep into the winners’ play.

“We should have had goals and the girls were well aware of that at half-time. But that was the past and we had to play in the present in the second half, which, to be fair, they did,” Louth’s manager added.

“The big thing was to not concede a goal and give Carlow any chance of getting back into the game. In fairness to our defence, they held very strong.” KEY MOMENTS
The key occurrences took place either side of the break, as Boyle’s three-pointer was followed by Kate Flood’s conversion of a penalty five minutes into the second half, after a foul on Rebecca Carr.

Louth’s lead was well into double digits as a consequence, in a game they led from start-to-finish.

Match-winner Boyle had the opening three points inside just 80 seconds and from there the outcome was of the foregone variety. Simply, it was going to be a matter of by how much Louth would win.

Nonetheless, wing-back Deirbhile Osborne - a player whose family are steeped in the tradition of football in this area - reckoned the start was key to what turned out to be a straight-forward excursion.

“Getting a good start, it builds confidence and gets the momentum going.”

Perhaps Osborne, more than any of her colleagues, required the comfort as it was her first provincial final at adult level. The Naomh Fionnbarra defender was, of course, injured last year and missed the decider triumph over the same opposition.

“I don’t think I’ve won a final since playing minor about five years ago. It’s brilliant to get playing and to get the win as well,” she said, grinning from ear to ear.

From her reaction, it was, thus, simple to gauge the meaning of this victory, in spite of the competition containing just two teams. Glance over the age profile of the Wee County line-up and a significant majority are shy of their prime years, which surely bodes well for the months and years to come.

And, Osborne concedes, this silverware can only but help increase the sense of belief around a side that came up short at Croke Park last September.

“I think today will bring great spirit to the younger girls to see what can be achieved.

“Everyone just wants to really try their best in training and the management do absolutely everything to get the best out of us.”

THE FUTURE
However, Sunday’s triumph is far from a year-maker. The All-Ireland is where the potential for a legacy lies and their quest for a return to HQ begins on Sunday week, back in Carlow.

Following a decision at Central Council last Thursday night, Louth’s group has been reduced by Derry, with a pair of three-team divisions, in which the Reds will face the Barrowsiders and London, as Antrim, Fermanagh and Derry do battle on the other side.

“If you win one game you’re probably in with a strong chance of getting out of the group,” was Bishop’s take on the format’s alteration.

“We play Carlow again. If we were going to play another county it’d be a completely different scenario.

“But Carlow are walking off that pitch extremely disappointed and we’re going to have to face that in two weeks’ time. Then, you’ve London, which is a completely unknown entity.”