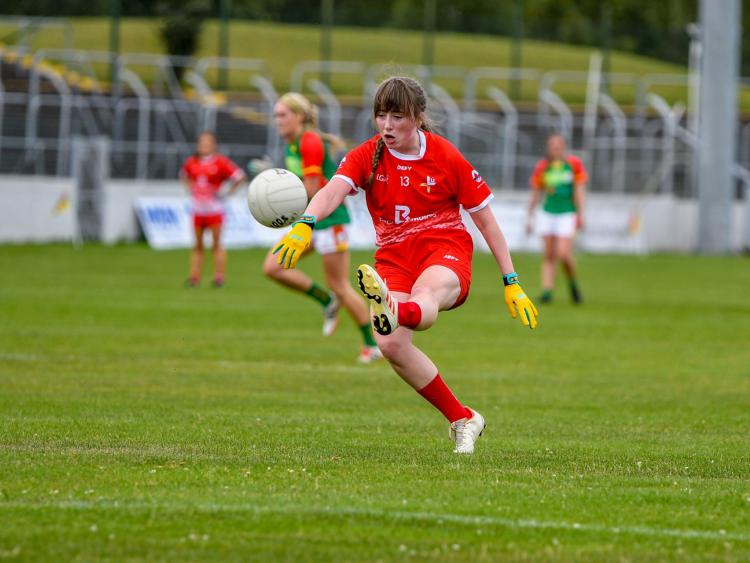 Lauren Boyle, the Cooley Kickhams ace, finished with 1-7 from play, 1-6 of which came in the first half. (Pic: Warren Matthews)

It says much about the player’s pristine performance that Sunday’s Leinster JFC Player of the Match award winner was predictable from a premature juncture.

Lauren Boyle, the Cooley Kickhams ace, finished with 1-7 from play, 1-6 of which came in the first half, as the Reds rampaged to a second successive provincial final victory.

But such is the precociousness of the teenager’s burgeoning talent that such displays aren’t obscure, with gong-worthy salvos a trend that she continues to repeat.

“1-7 is fantastic, but that’s nothing new for Lauren,” manager Darren Bishop said.

“We’ve almost come to expect that of her and she expects that off herself. The big thing for me is that she maintains that.

“But the other side to Lauren’s game that everyone seems to forget is the scores she sets-up, the assists. She may come off the pitch with 1-5, 1-6, 1-7, but she may have set-up 2-3 or 2-4 because of her killer pass or vision when she’s got the ball.

“It’s no surprise that their captain was moved back in to pick up Lauren. Obviously, she was there to do a job as best as she could, but Lauren still hit 1-7.

“Up front today, were we firing on all cylinders? Probably not. But we’ve two weeks to prepare for an All-Ireland qualifier, which is extremely important,” the Cremartin man added.

A perfect day for the Boyle household was capped when her sister was part of the Cooley U14 panel to excel at Féile. While, on her own outlay, the 19-year-old said: “Throughout the game I’d about four different markers, but I think I played well, to the best of my ability anyway, and scored a good few points. It’s a good day.”

And her team-mates were even keen to acknowledge the corner-forward’s input to a facile victory, Deibhile Osborne in particular: “At some stages, she had the ball and the next thing she was kicking it. It was like: ‘Is she going for a score?’ And, absolutely no bother to her.

“In training, some of the scores she takes, it’s like: ‘fair play, how’s she doing it?’