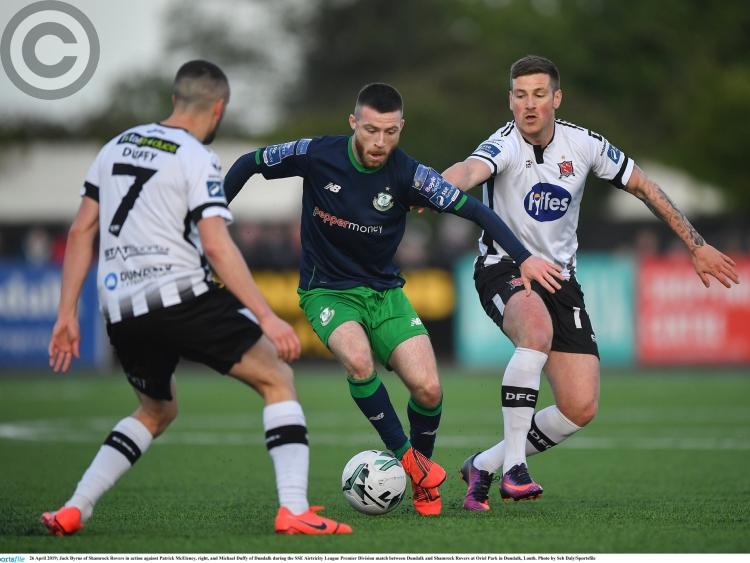 Dundalk FC can complete a 21-point swing in the title fight when they look to land a potential knockout blow to Shamrock Rovers at Tallaght Stadium on Friday night, kick-off 8pm (live on eir Sport).

Rovers’ latest Dublin Derby defeat by third-placed Bohemians before the mid-season break leaves them five points behind the defending champions. The Hoops have collected just a single point from a possible 15 against the teams either side of them in the table.

Stephen Bradley’s desperation for a striker has been highlighted by his move for Cork City’s Graham Cummins. The 31-year-old has netted just four goals – including one penalty – this season, but will make the surprising transfer from Leeside when the window opens next Monday.

That is also a sign of Cork’s current plight. On the back of five successive years in the top two, they find themselves in seventh, 13 points adrift of guaranteed European qualification, and boss John Cotter must further cut his cloth in July.

At the business end, Dundalk have had a new rival this year in the shape of Shamrock Rovers, who at one stage enjoyed a 13-point lead at the top. By 10pm on Friday, they could trail by eight points with just 14 games remaining.

Dundalk had a warm-weather camp in Spain last week, with midfield duo Robbie Benson and Jamie McGrath making a welcome return to training after injury.

The management team used the trip abroad to put their heads together in tackling Riga in the UEFA Champions League next month. However, first-team coach John Gill insists their focus remains on their three upcoming domestic fixtures against Rovers, Waterford (July 1) and Derry City (July 5).

Speaking in Spain last Thursday, Gill said: “We have our eye on the Champions League, but we are also looking at Shamrock Rovers.

“We are looking at Riga and it gives us an opportunity to look at them individually as staff and then come together to see what we think they are like. We won’t be giving the players much information yet because we have three important league matches when we come back.

“We have to focus on those games; we have three matches when we get back. We have a big schedule, but that is why you are involved in football and it’s a month to look forward to.”

With 20 days since their last outing, a big support is expected to follow Dundalk to Tallaght. For the trip, the Lilywhites will be without suspended defensive pair, Daniel Cleary and Dean Jarvis, who have each accumulated five yellow cards.

Dane Massey will replace the latter, while Brian Gartland will lead the team out, with the club captain reiterating Gill’s words.

“Europe, obviously, is a big thing for us coming up,” Gartland said, “but we have three massive league games before that. We can only look to the next one, which is the biggest, against our title rivals Shamrock Rovers, so we’re aiming towards that.”

The teams have met twice already this season, with a scoreless draw in the capital in March followed by a 2-1 win for Dundalk at Oriel Park in April, where Patrick Hoban and Michael Duffy did the damage.