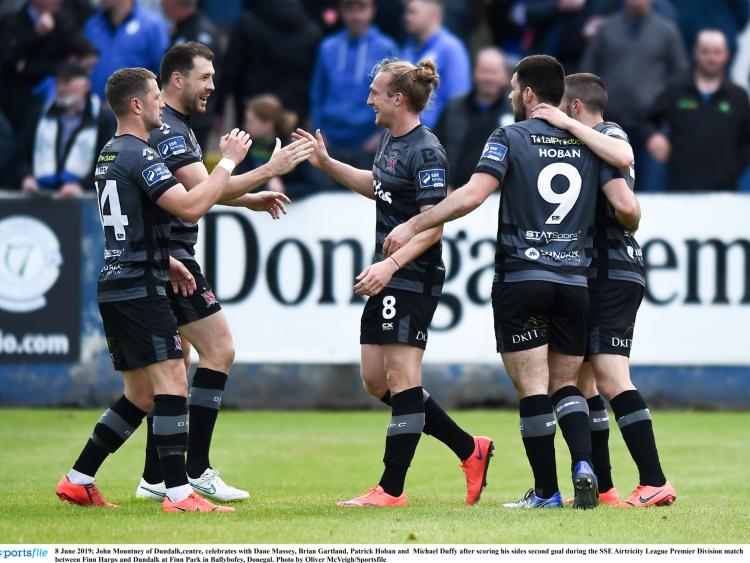 John Gill has admitted that Dundalk FC throwing away two points from the last 36 available “still rankles” with the champions, but that they would have “taken your hand off” for their recent haul which has propelled them clear at the top of the SSE Airtricity League Premier Division.

Having suffered back-to-back defeats on trips to St. Patrick’s Athletic and Sligo Rovers in early April, Dundalk collected their 11th win in 12 games with an easy 3-0 success over Finn Harps in Donegal on Saturday night.

The only one they did not win in the past two months was against Derry City at Oriel Park on May 3, where they sloppily coughed up a two-goal lead in the final quarter.

Derry repeated that dose against second-placed Shamrock Rovers in Tallaght Stadium at the weekend, as Dundalk guaranteed themselves a clear advantage when they make the trip to Dublin 24 on June 28.

This Friday, Rovers play their game in hand away to arch-rivals Bohemians.

“That still rankles with us a little bit, because we were 2-0 up and we should have had that game in the bag,” Gill said, looking back at that 2-2 draw with The Candystripes.

“But, listen, if you had said to me at the start of the 12-game run, we’ll give you 11 wins and a draw, we would have taken your hand off.

“When you go back to where we were after the Sligo game, we were in a difficult place.

“It wasn’t a particularly good night for us or a good couple of weeks, but it’s great credit to the players, the staff and the fans. Everybody stuck together, and it shows you when you stick together and you work hard, you get your rewards.”

On their new five-point lead at the summit, Gill added: “The next game happens to be Rovers, so that’s the game that we’ll focus on.

“We had a chat after the Sligo game and we said that we’ll take one game at a time. That’s what we’ve done. We’ve tinkered a little bit with the team and it hasn’t weakened it.

“We’ve got Murray, Benson and McGrath to come back, which are like three new signings, and we’re going to need them back with the fixture congestion that we’re going to have.

“We’ll work very hard this week – we’ll be in four days – and it gives us a chance of maybe upping the fitness levels a little bit with Europe in mind.

“We’ll have a few days off then and we’ll get back together again in a little mini-camp.

“We have a difficult schedule when we come back. We go Friday, Monday, Friday and then the European game, so we’re going to need everybody back fit and raring to go.”

The scheduled clash with UCD this Friday was postponed due to the Students having players involved with the Republic of Ireland U21s in the Toulon Tournament.

Dundalk had attempted to fill the void by bringing another fixture forward, with Gill left frustrated by not being able to do so.

“That wasn’t down to us. We did everything we could to get a match, but for whatever reason, we couldn’t get one.

“We wanted to play. We were prepared to go anywhere to play. It’s not going to happen. It is what it is – we’ll get up and get on with it.

“We’ll keep our heads down this week, we’ll work hard and we’ll focus on Shamrock Rovers.”