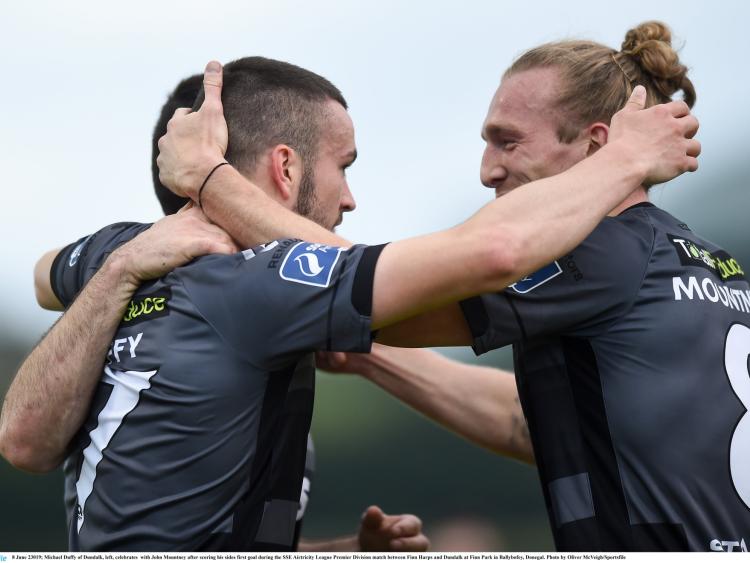 Dundalk FC raced five points clear at the top of the SSE Airtricity League Premier Division with their 11th win in 12 outings, as they took full advantage of Shamrock Rovers’ result with a routine 3-0 victory over Finn Harps in Ballybofey on Saturday night.

The champions had started well, but it took them until past the half-hour to find a breakthrough. John Mountney was the creator with a surging run down the right and his cross was headed in by the unmarked Michael Duffy.

Mountney then made it five goals in three games with a header from a Patrick McEleney delivery as Dundalk doubled their advantage before the half-time whistle.

Duffy went close with a diving header after the break, but on 61 minutes it was 3-0 when Jordan Flores’ corner was headed home by returning captain Brian Gartland, as they go into the midseason break on a high. 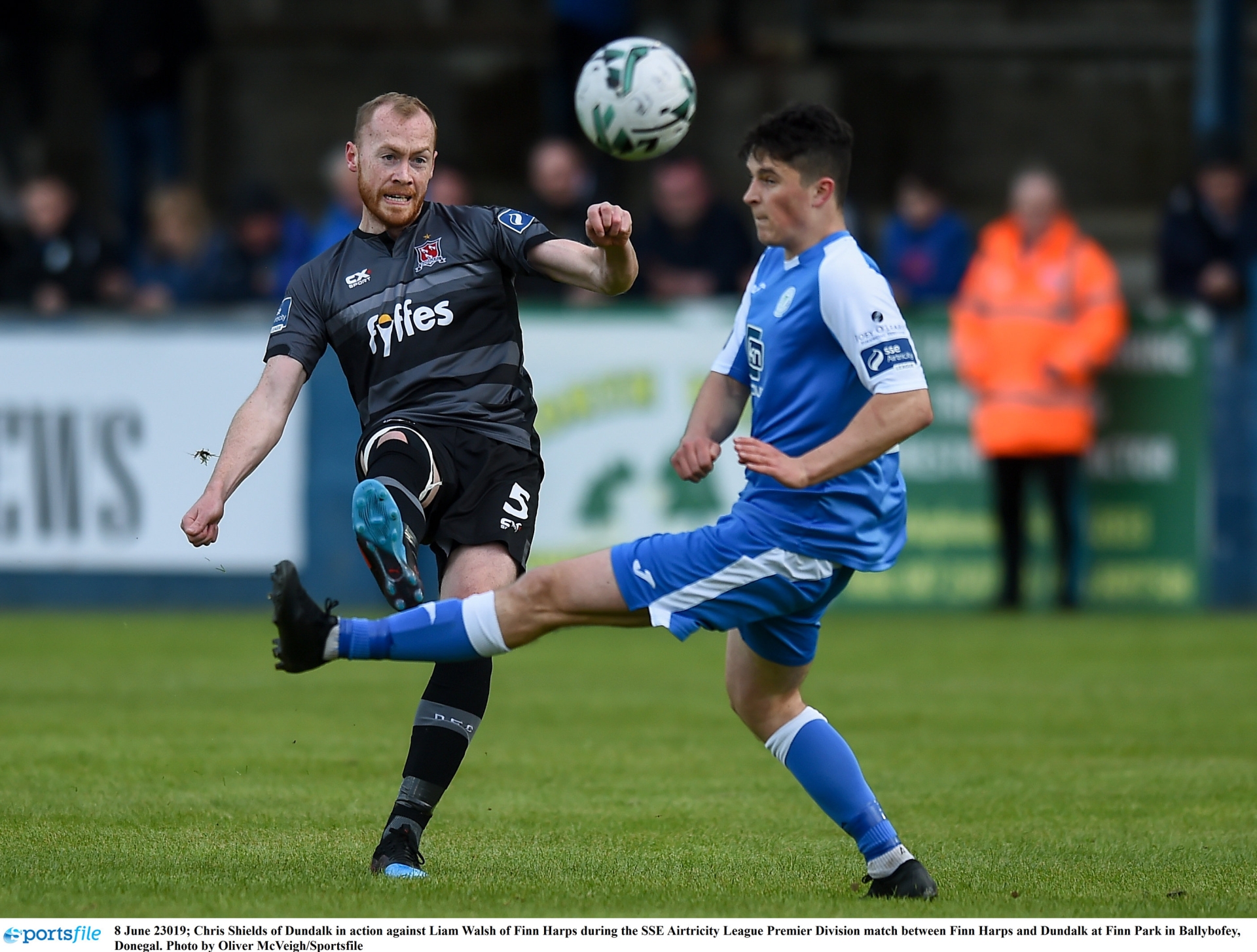 Dundalk head coach Vinny Perth brought Gartland and Dane Massey into his team for the trip north-west, with Seán Hoare and Dean Jarvis dropping to the bench. Harps were blunted in attack, with Caolán McAleer and Seán Boyd both serving suspensions.

The Lilywhites started brightly, without seriously troubling Mark Anthony McGinley, one of four fresh faces in the Harps lineup. The hosts then earned a set-piece which was delivered by Mark Russell and met by Daniel O’Reilly, but Gartland headed behind the danger in the six-yard box.

On 25 minutes, Dundalk broke at pace from a Harps corner, with Duffy raiding forward. He lost possession but they managed to regain control of the attack, with the winger’s cross picking out Patrick Hoban whose header was straight at McGinley.

However, there was no stopping Duffy’s header on 32 minutes. Another swift attack saw Mountney make a strong run down the right, and his cross was met by the Derry native who was left all alone in the centre. 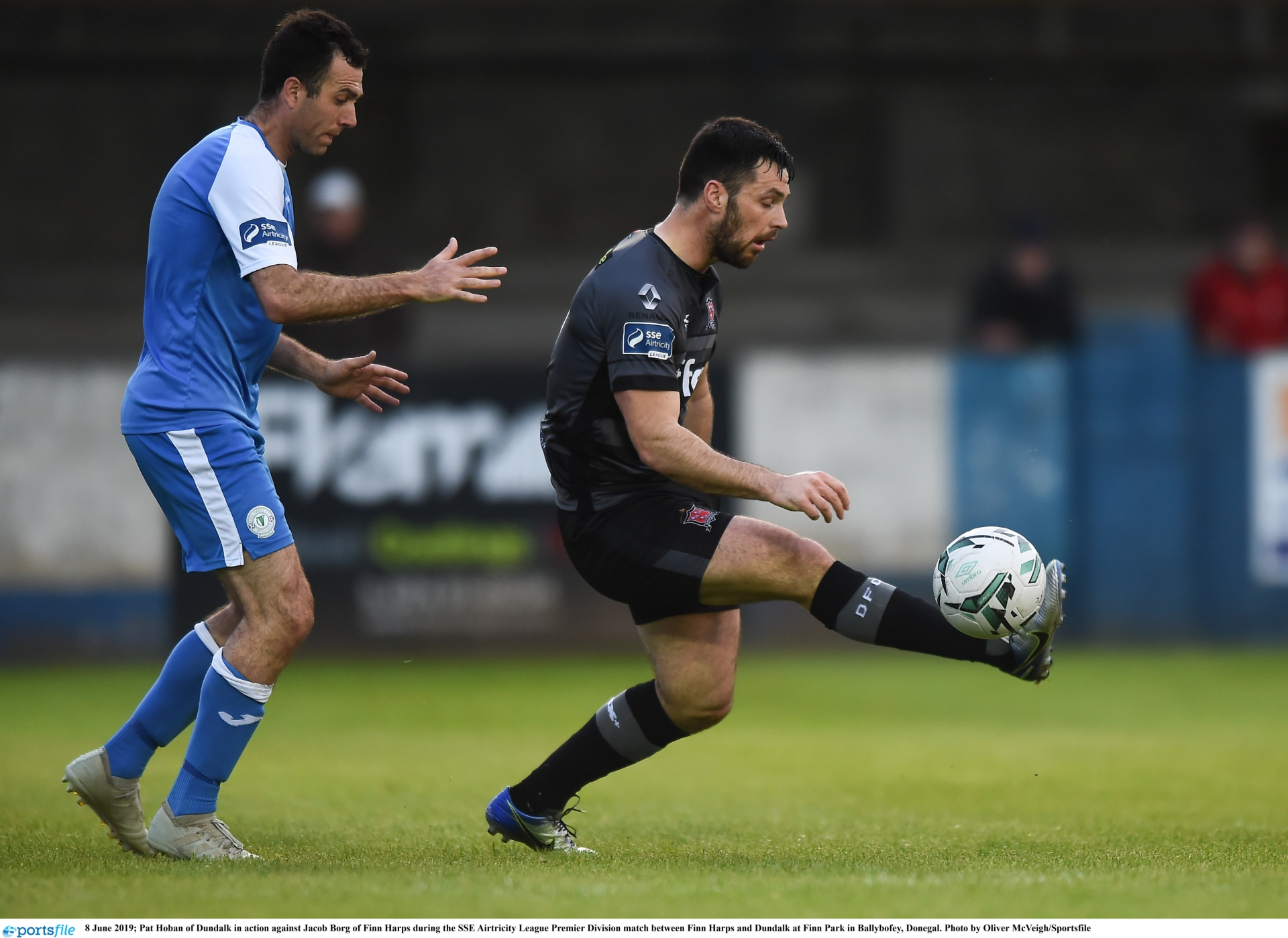 Dundalk made it 2-0 before the break when McEleney’s in-swinging cross found the head of Mountney who powered the ball to the net, to add to his hat-trick against Sligo Rovers eight days earlier.

Flores went close on a couple of occasions at the start of the second half. Harps did give Dundalk something to think about when O’Reilly’s free-kick from distance was saved by Rogers, who then made a smart save to deny Mark Coyle’s stinging shot.

Dundalk almost added a third on 58 minutes when Seán Gannon’s deep cross picked out Duffy but McGinley was equal to the diving header.

However, it was 3-0 past the hour-mark when Flores’ left-footed corner from the right was headed in by Gartland.

Harps chased a consolation and they almost got it. Midway through the half, Jacob Borg’s strike from distance took a couple of deflections which brought a good save out of Rogers. Then, Russell found Mikey Place who should have scored but from 12-yards, he missed the target.

Rogers pulled off another good save on 83 minutes when he tipped over O’Reilly’s shot, as he added another clean-sheet to his collection.

Substitute Georgie Kelly headed off the crossbar deep in injury-time in the last action of the match.

Dundalk are now out of action until June 28 when they take on second-placed Shamrock Rovers at Tallaght Stadium.