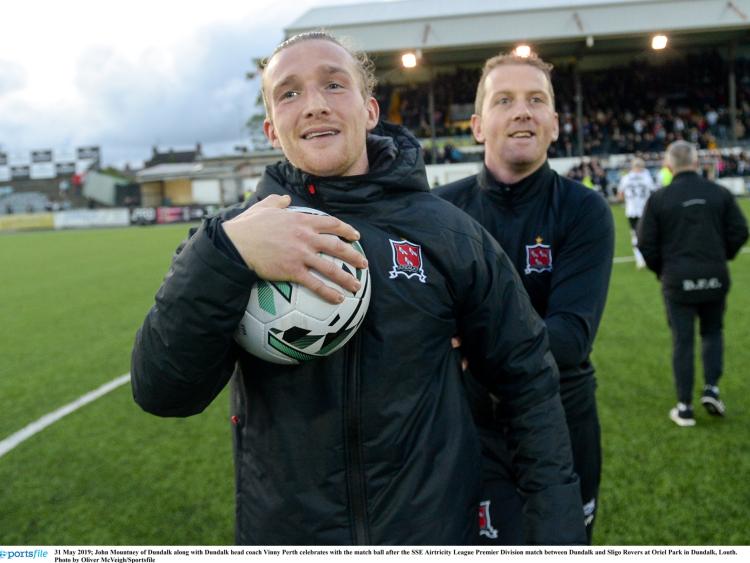 Vinny Perth says he will turn a blind eye to Patrick Hoban’s decision to hand John Mountney a late penalty, with the head coach stating “you’ve got to love the game”.

Mountney admitted post-match that he had pulled at regular-taker Hoban’s heartstrings, as he wanted to complete his first-ever career hat-trick.

Dundalk were in cruise control, leading 3-0 with just 10 minutes remaining. The club’s record goalscorer responded by allowing Mountney the opportunity, which he took with aplomb.

However – while delighted for their longest-serving player, who has been at Oriel Park since 2012 – Perth was keen to stress the possible importance of goal difference.

Shamrock Rovers had recently closed to within two goals of the defending champions, but Mountney’s confident conversion from the spot extended that advantage to six, with both teams closely matched on points at the top.

“Leagues can be decided on goal difference, so it’s not something that we would openly encourage. But at the same time, you’ve got to be sentimental sometimes – you’ve got to love the game.

“What a marvellous achievement for someone to get a hat-trick. For that end of it, I’ll pretend I didn’t see it.

“I’m delighted for John. John is a brilliant person in the club – he really helps out in the club in everything that’s needed. It’s great reward for someone who has been so loyal to this club.”

Perth also praised the competition within his squad – with Mountney making a strong claim to keep his place ahead of Daniel Kelly – and he reserved special praise for young defender Daniel Cleary.

The head coach said: “A lot of the players stood up. In particular, people will say John, obviously. It was outstanding from him. Michael Duffy was outstanding, Pat Hoban led the line very well, Jordan Flores is becoming the player we all think he is within the staff.

“But for me, the two centre-halves were outstanding. Dan Cleary is 22 years of age, he started 25 games last year and he’s well on the way to do the same again. We have high hopes for him. To be fair, our club captain had to be the one that missed out.

“It’s real competition in the team. I thought Brian (Gartland) was outstanding the other night against Pat’s. It’s great that we can keep these players fresh and hungry.

“You see it, Daniel Kelly scored a hat-trick earlier on in the season to keep John Mountney out of the team. It just shows you the standard, John has had to do the same now. There is a kick of a ball between so many players.”

Perth has adopted a strong rotation policy this season, and he says that that is necessary given the position that they are in.

“To be fair, we haven’t always rotated our players,” he acknowledged. “But I think we have to with the quality of the squad that the club has given us. Also, the amount of injuries we’ve had mean we need to keep the team fresh. We’re missing Benson, McGrath, Murray and Dummigan out of the team – four players that could arguably play at any stage.”

Ahead of the July transfer window, Dundalk have been linked with former centre-half Andy Boyle, as well as a number of other players, including young Waterford star Zack Elbouzedi.

However, Perth stated: “I think the national media linked us to six players on Friday. I believe in this squad – I think it’s the best squad we’ve ever had, so we’re not in a rush to get players. We’re very confident in the group we have.

“But at the same time, if good players become available, we’re going to be in the mix. But I don’t see wholesale changes to this squad. The national media are guessing at this stage – they have linked us to players that just aren’t feasible and we aren’t interested in.

“All we do is concentrate on the group that we have. It’s a brilliant group and long may they continue to do what they’re doing.”