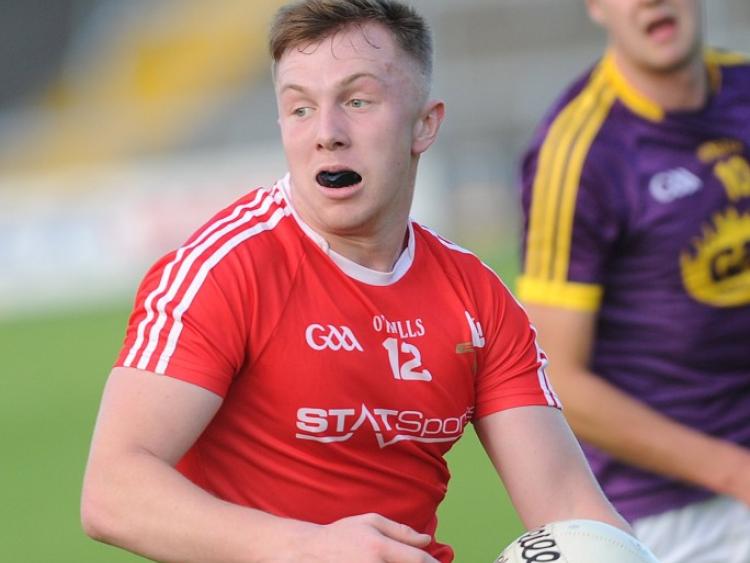 Fearghal Malone was on the Louth U20 team beaten by Antrim in Ardee this afternoon. (Pic: Arthur Kinahan)

An improved display wasn't enough to get Louth U20s off the mark in this season's Leo Murphy Cup as Antrim departed Ardee with the spoils on Saturday afternoon.

Having shipped a 18-point defeat to Cavan on Wednesday night, the Reds were certainly more competitive, but Antrim were the classier outfit, despite having made numerous changes from their midweek draw against Derry.

In Dermot McErlaine and Adam Loughran, the Saffrons had the game's outstanding players, the pair having shown ball skills and ingenuity that few others could match.

But that type of comfort in possession wasn't restricted to the pair, the visitors' ability to retain possession while moving forward and probing - before successfully finding gaps - was a feature of the opening half.

Antrim had 1-2 on the board before Louth got off the mark - Loughran finding the net. Keelan O'Neill's goal got the Reds started and they hit four of the next six points - Gerry Garland, Liam Dawe, Ben McKenna (free) and Conor Gillespie (free) - to level approaching half-time.

But like Cavan did on several occasions, Antrim just accelerated clear and closed the first half with five successive points to lead 1-9 to 1-4 at the turnaround.

The opening eight points of the second period were shared - McKenna, O'Neill, Fearghal Malone and Gillespie for Louth - before a fine effort from Cooley Kickhams clubman Malone had Louth to within four.

Yet Antrim just surged into the winners' enclosure with goals in successive attacks - Marc McAfee and Rory Brolly, son of Joe, hitting the net.

The majors continued to fall as the game became stretched, O'Neill and Malone bagging a further pair for Louth, while Loughran ran in Antrim's fourth maximum.

To Louth's credit, they battled to the bitter end, but the eight-point margin accurately reflected Antrim's superiority.