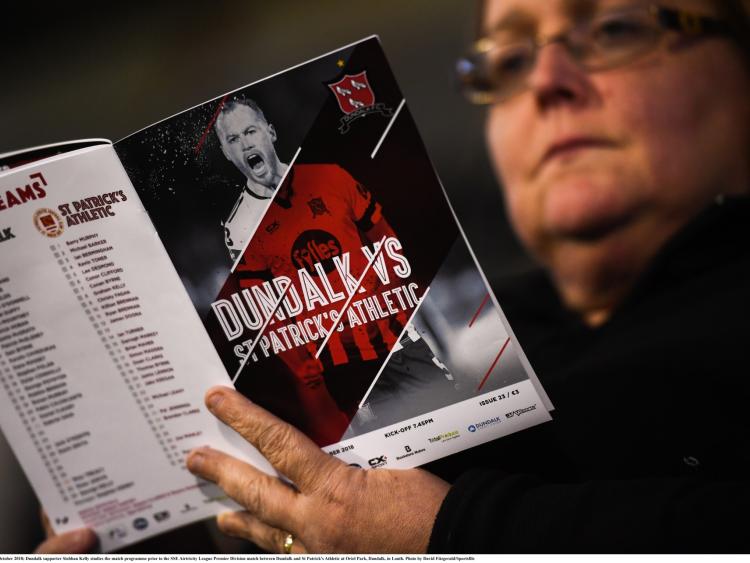 A supporter takes time out to read Dundalk FC Magazine before a match at Oriel Park. (Pic: Sportsfile)

It happened to cross my mind a couple of days before the official announcement came that Dundalk FC Magazine were yet to claim their annual Programme of the Year gong.

The ninth time in 10 years that Dundalk’s matchday offering has been recognised with an award, kudos is extended to the programme’s editors and many dedicated contributors whose commitment makes the all-colour production a must-buy on a game night.

Dundalk’s run of success in this category began in 2008 when the First Division Programme of the Year title was accrued - Galway being the winners of that this time around - and since 2010, the Lilywhites have been awarded Premier Division honours on an annual basis.

The purchase of a matchday programme has long been a tradition in my own, sports-immersed family, your writer having boxes and drawers brimming with publications from a variety of regions, games, teams and sports.

It was, thus, a disappointment that while Dundalk produced programmes of an incredibly high standard during the club’s mesmerising European run of 2016, away trips often saw none available.

Indeed, it seems to be very much an Irish and British tradition, with several clubs abroad either no longer seeing the merit in publishing a programme or the demand isn’t there.

Of the many European trips I’ve made with the Lilywhites in recent years, I think the only one where a programme was taken home was from the game against Zenit St. Petersburg. I must dig it out, although it isn’t much use to someone who hasn’t a word of Russian!

It would be interesting to assess how popular matchday programmes remain. Certainly, for those attending GAA clashes, they’re becoming increasingly worthless as the team that begins the game is often in contrast to the 15 players and 11 subs listed. The waste of a couple of euro many see it.

But soccer is different for the better, squad numbers meaning a list is all that’s required, which generally appears on the back of the publication. Instead, a football programme is judged upon its layout and content, two categories in which Dundalk rank very highly.

It must also be said that Dundalk aren’t like some other Irish clubs in that they produce a unique programme for every match.

There is no doubling up, in a sense, with the home team and both away squads printed, if two home matches are played within a short space of time.

But, perhaps, the standout element to the Oriel Park side’s offering is the freedom and articulacy of those writing columns, Colm Murphy or Darren Crawley in editorial, but especially Vinny Perth and former boss Stephen Kenny, who’ve often used the platform to address various important issues, economic, social, political and football-related.

Congratulations, again, to all those involved.