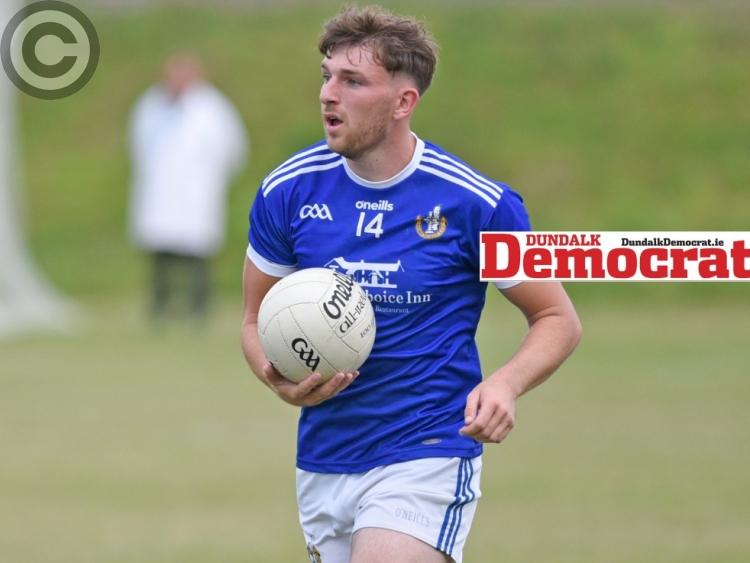 Naomh Máirtín's Sam Mulroy is in line for his championship debut for Louth on Sunday. (Pic: Ciarán Culligan)

Wherever Sam Mulroy is playing, it can be guaranteed that his father, Graham, will be in the stand or along the line.

Or, maybe that should be, whatever match Graham Mulroy is at, Sam is usually playing?

Your writer remembers standing with a colleague outside the clubhouse in Ruislip before last year’s All-Ireland qualifier against London and meeting the Naomh Máirtín man, Graham, in his Louth jersey. He had made the trip expecting his son to be part and parcel of what proved to be Pete McGrath’s only win across league and championship.

However, having been named as U20 captain and knowing an appearance in the English capital would rule him out of that campaign, Sam stayed at home as his oul’ lad flew away.

The Louth star laughs when this is put to him, but acknowledges just how much his fledgeling inter-county career impacts those at home. He could make his championship debut on Sunday, four years after being called into the panel by Colin Kelly, and Monasterboice’s Mulroy clan will be out in force to see it.

“My family go everywhere, in fairness,” he tells The Democrat, “My granny came up to a college game in Coleraine one of the days: it’s brilliant.”

Louth’s top-scorer so far this season, having put in several match-winning displays during their Division Three near-promotion-miss, Mulroy treats his league effort as “a learning curve”, but is ultimately delighted with the strides he has taken. After all, by playing for the Reds and representing his county, he is living the dream.

“Inter-county football is unbelievable and I don’t know why anyone wouldn’t want to play it,” he says.

“Every footballer should strive to play in it. If you put in a performance, it’s top of the world stuff.

“I think there is more of a will to play for the county now… and I hope it keeps improving that way.

“I know over the last few years it’s been tough to get lads out - and I don’t know why because when I was a young lad all I wanted to do was play with Louth.

“I think the change in mentality, we have to drive it and that doesn’t just come from players and management, it comes from everyone who promotes Louth football and who makes you want to go and pull on that Louth jersey.

“I think that should be every young lad’s dream.”

And there you have it; dreams can come true. Playing for Louth on Sunday, in front of his family, friends and club colleagues, the pride will be tangible for a lad who, one feels, is only getting started.

He is, after all, the latest blockbuster from a club that brought you JP Rooney.