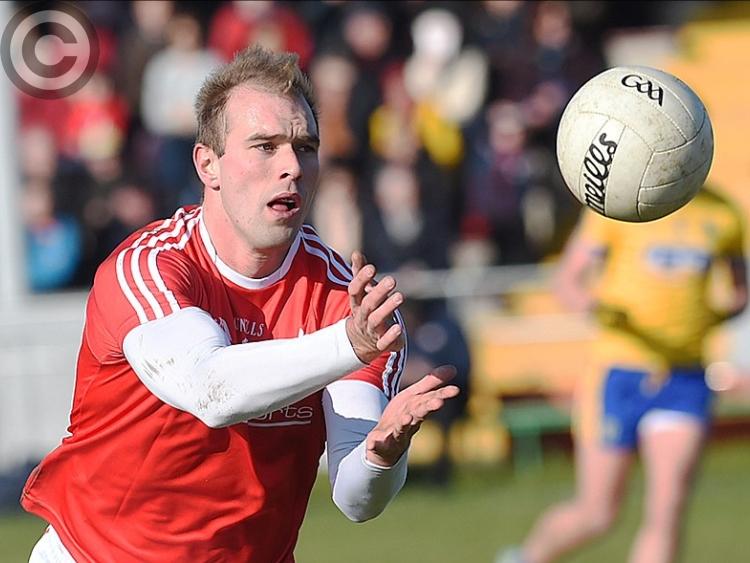 Glen Emmets’ Conor Grimes is feeling “as fit and strong as I ever have” ahead of Louth’s Leinster Championship opener against Wexford in a fortnight’s time.

The sturdy full-forward has worked his way back into contention after suffering an ACL rupture and fractured right knee during a club game last July and is hopeful of Wayne Kierans to involving him on Sunday week.

While not having set a comeback date, Grimes was eager to make it back within nine months - which he has - following an original year-long diagnosis. However, the road to recovery was an arduous one, nonetheless.

“I was away travelling for a year, came back and then got injured for a year,” he told The Democrat.

“I haven’t played much football over the last two years, but it makes me all the more hungry to get back.

“Missing it so much and all those dark evenings in the gym, running and getting the work done, it just makes it all the more worthwhile when you get out there on the sunny evenings and get a bit of football in.

“I made it back in nine months and that was always the goal; to try and get back as quickly as possible, but obviously as safe as possible, too.

“They were kind of saying 12 months, but as we started getting into rehab, it was going probably as smooth as it could have gone the whole way through. I’d no real hiccups along the way and thankfully we got to the pitch stage.

“I’m still in a recovery stage, I’m by no means 100 percent back, but it’s great to get some minutes at club level every week and hopefully I’ll be trying to look towards the championship as well.”

A team-mate of Ciarán Byrne’s at both minor and U21 level, the pair worked together through the winter and spring months in a bid to overcome their respective long-term injuries.

But while Grimes’ recuperation went according to plan, the St. Mochta’s man recently suffered a setback, further ankle surgery having ruled him out of inter-county action for the foreseeable future.

“We put in a lot of work together and when he went for his scan and got back news, my heart just sunk for him,” the Tullyallen man said.

“I know how much work he’s put in to try and get back. He’s been out of the Louth jersey for a long time now and he was itching to get it back on.

“He’s so unfortunate having put so much work into the game, both in Australia and back here, and he’s just been crippled by injury.

“We put a lot of work in together over the last five or six months, since Louth got back together: Wayne and the lads bought into us at the start and kept us in the group because both of us work a lot better in a team environment and having the support system behind you is just phenomenal. To be honest, it’d be nearly impossible to do it without that and it’s something I’m really thankful for.”

On the Wexford match, Grimes added: “I’m in a position now where I’m back playing football, I’m back out on the pitch. To get back into an in-form side - the lads are flying at the minute - is going to be extremely difficult, but I’ll give it my best. I’m going to keep training as hard as I can and put my hand up, but it’s going to be difficult.”