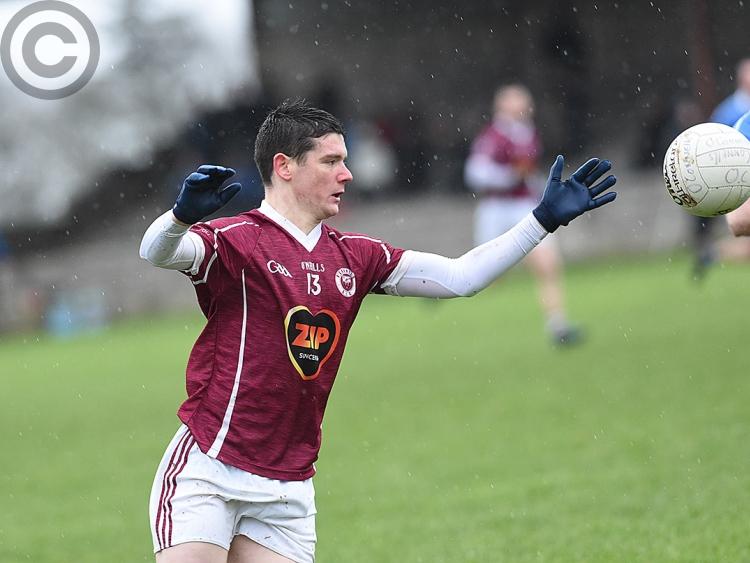 O’Connell’s bounced back from Tuesday night’s defeat in Termonfeckin when they came back from eight points down three minutes into the second half to record a two-point victory over St. Mochta’s in a very wet Louth Village on Friday night.

The home side played with the elements at their backs got off to a good start with points from Declan Byrne, Gerry Garland and Eamonn O’Neill after 10 minutes. Garland added a fourth point a minute later and things got even better for the home team as Stephen McCooey shot to the corner of the net. Two minutes later it was déjà vu as the same two men combined and again with the same outcome, to make it 2-4 to no score after 15 minutes.

A free-kick from Robert Quigley got the Bellingham side off the mark and although Farrell increased Mochtas’ lead with a point after 25 minutes, O’Connell’s finished the half better and added three points to their score, another from Quigley and a brace from Cian Doyle to leave the score at the break 2-5 to 0-4.

The Bellingham side had the wind in their favour in the second half, but that did not stop McCooey from getting the first point of the half to put his team eight in front. The visitors got more into the game now and half-back Stuart Osborne started the comeback with a point. They then landed three more which were all frees, one from Quigley and the other two from Niall Conlon, to cut the margin to four after 40 minutes.

Osborne popped up again with a point to leave three between the sides, but a free from Garland returned the gap to four and it took a brilliant save from Reynolds to deny McCooey his hat-trick.

Frees from Conlon and Quigley cut the lead in half and a long range effort from Dean Stanfield left one between the sides with just over five minutes remaining. The teams were level a couple of minutes later when Conor McGill put over a great effort with the outside of his boot from out near the touch line. The visitors went ahead with a well-taken long range free from Conlon with time almost up.

The home side pushed up field for an equaliser, but the Bellingham defence held firm and cleared the ball to Conlon, he played a cross field pass to corner-back Jason Carroll who cut inside his marker to sealed the victory and complete the comeback for his team with the last point of the game.