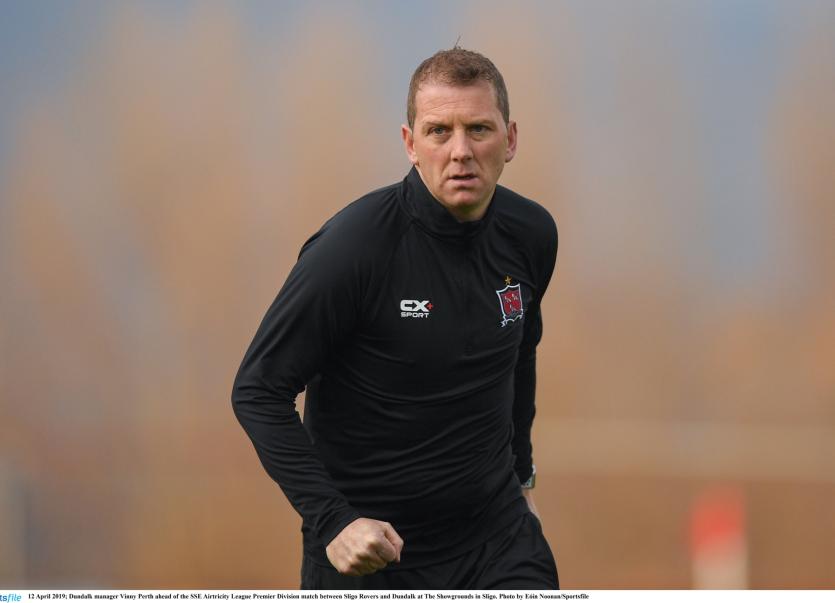 Dundalk FC head coach Vinny Perth says he will “look in the mirror and question what we are doing wrong”, after the defending champions suffered successive SSE Airtricity League Premier Division defeats for the first time in nearly two years.

The Lilywhites lost their unbeaten record to an own-goal in a below-par display against St. Patrick’s Athletic in Dublin last weekend. However, their performance at struggling Sligo Rovers on Friday night was much more worrying as the hosts could easily have netted at least four.

Dundalk’s goal came through a cool spot-kick finish from Patrick Hoban, but outside of that, goalkeeper Mitchell Beeney had little to do throughout. That has become a trend in recent games where Perth’s frontline has failed to fire.

Those absent, in particular the creativity of Patrick McEleney and midfield influence of Chris Shields, have been sorely missed. Seán Murray is clearly playing through an injury which has limited his impact, while others are simply out of form.

But Perth refused to make excuses, with an honest assessment after making a quick exit from the dressing room at The Showgrounds.

He added: “If I go into injuries, I might be accused of making a couple of excuses, but we got what we deserved tonight – it wasn’t good enough.

“The team is struggling since the first game against Sligo when we had two broken bones, and we haven’t been able to fix it. We have had some good performances; we got a good run and clean sheets together, but we’re still short at the moment. I’ll look in the mirror and question what we’re doing. I’ll take responsibility for getting it wrong, and try to take responsibility for fixing it.”

McEleney and Shields did some work on the pitch in Sligo beforehand with physio Danny Miller, but Perth said afterwards that “there is no real light at the end of that tunnel” with the pair.

“I thought we’d have people back tonight. They haven’t been able to get back in time – they’re just struggling with those injuries. We’re seven-and-a-half weeks after Patrick McEleney had an operation on his ankle; Chris Shields did his medial ligaments six weeks ago.

“Those injuries are what they are; people can put timelines on them all they want. But until they actually get on to the pitch, test themselves and train with the rest of the group, they’re still behind and they’re still struggling. There’s no real light at the end of that tunnel.”