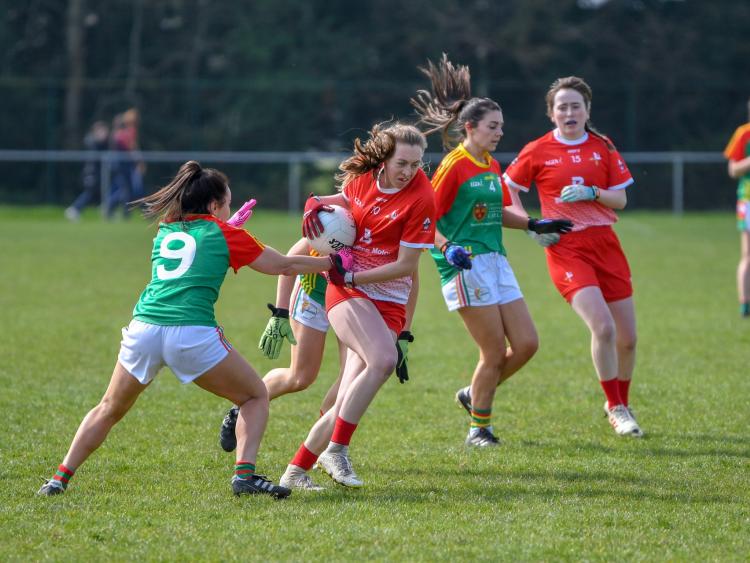 Rebecca Carr breaks through the Carlow defence during last Sunday's match. The Geraldines star has impressed for Louth this year. (Pic: Warren Matthews)

Louth manager Darren Bishop is expecting a tough test when his table-topping side take on Derry at Clan na Gael Park on Sunday afternoon (2pm).

The Wee County's win over Carlow last weekend virtually assures them of a place in the league semi-finals, but the Reds will be anxious to maintain their recent good form which has yielded victories in their last four outings.

The Oak Leaf girls have had a poor league campaign and are second from bottom in the table. They have beaten Kilkenny and drawn with Fermanagh, but lost their other four games. Nevertheless, when the teams met in last year's league in Ballymaguigan, Paul Crozier's side pushed Louth all the way and subsequently went close to beating Louth in the All-Ireland semi-final.

Monaghan-native Bishop, in his first full season as Louth boss, said: "I am very pleased with the players' attitude and commitment.

"The five-week layoff hasn't impacted our preparation and training has been quite intense.

This division is extremely tight and Derry will provide a tough challenge on Sunday. But you want to be pushed and tested to be made into a better side."

Carlow certainly tested his side in the first half last Sunday, but after the changeover, Louth turned on the style and cruised to a comfortable 12-point win.

The return of former Cooley Kickhams star Sarah Quinn to her native county after a stint with London has brought a calm assurance to the backline, while Deirbhile Osborne appears to have shaken off the leg injury which hampered the
Naomh Fionnbarra player for most of last year.

Meanwhile, Michelle McMahon has formed a strong midfield pairing with Eimear Byrne, with the latter, young Mochta's star Byrne, also showing her attacking capabilities, notching 1-2 in the win over Carlow.

Up front, the likes of Lauren Boyle, Niamh Rice and Rebecca Carr have performed exceptionally well to date and should have too much firepower for the Northern county. That would set-up a meeting with Fermanagh a week later to determine who finishes top of the league.