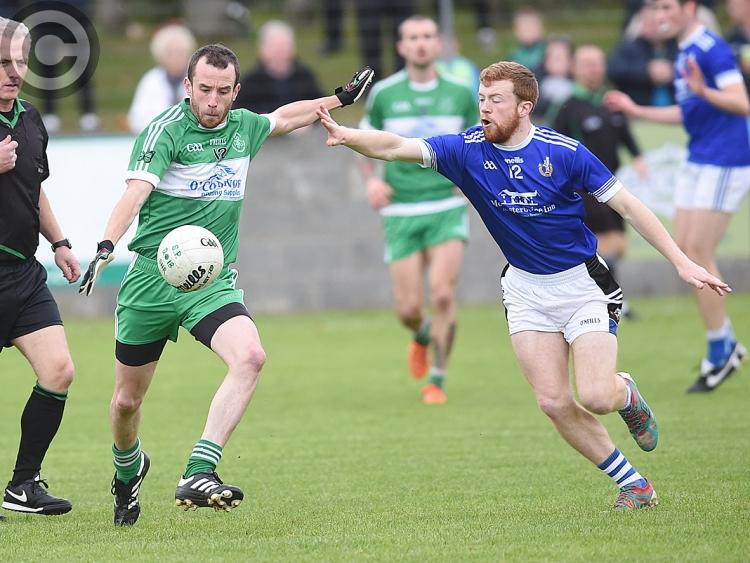 Clan na Gael were impressive winners over Newtown Blues in the opening round of Division One last Tuesday night. Mark McCann’s men held the initiative for much of a contest against a Blues team who showed with only one of their Louth stars, Ross Nally.

Geraldines registered 2-18 at home to O’Raghallaigh’s, who mustered 2-6 in response, with Jim McEneaney contributing 1-5 for Eamon Dunne’s men. The Gers had 10 different scorers and led 2-10 to 1-3 at the interval.

The only match that went ahead in the second division saw St. Joseph’s recover to pip Hunterstown Rovers at the death. Conor Neary’s injury-time effort split the sides, 2-10 to 2-9, at the end of a thriller which saw Rovers lead 1-6 to 0-4 at the break.

Ryan Burns struck two goals for Hunterstown, but two majors from St. Josephs’ Oisín McGuinness across five final-quarter minutes brought them back into contention and having drawn level, they went on to record an unlikely triumph.

Just three days after lifting the Kevin Mullen Shield - their first title in 17 years - Na Piarsaigh got their league campaign off to a losing start away to Roche Emmets. Despite leading 2-2 to seven points at the break, Thomas Duffy’s men couldn’t match Roche during the second period, and goals from Shane Byrne, Dan O'Connell and Evin Quigley ensured an opening round win for the hosts.

Also on the night, Stabannon Parnells and Naomh Malachi drew 1-6 apiece. The Mals battled from behind to lead entering the closing stages, but Parnells deserved a draw, which they duly got.