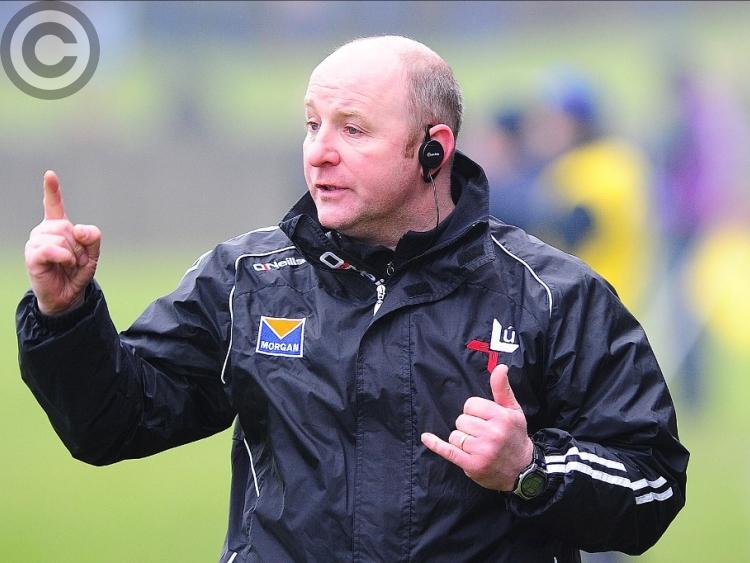 Colin Kelly during his time as Louth manager. He will help Paul McLoughlin with Wexford ahead of the Leinster Championship. (Pic: Arthur Kinahan)

Colin Kelly has reaffirmed his commitment to St. Kevin’s despite joining the Wexford senior footballers in a coaching capacity ahead of the Leinster Championship.

The former Louth player and manager has agreed to move on-board with Paul McLoughlin’s side as a ‘forwards’ coach’ having previously worked under the Kildare-native when he was at the helm of Waterford, in 2009.

Discussions over a role with the Slaneysiders, Kelly says, date back to late last year and was only agreed in the last couple of weeks.

Wexford face Louth in the opening round of the provincial championship, at Wexford Park on May 12, a game in which Kelly’s new charges will come up against many of those whom the Drogheda man bonded with during his three years in charge of his native county.

“It’s something I’m looking forward to and I’m glad to be helping out Paul, someone who I’d be very, very friendly with,” Kelly told The Democrat.

“But, primarily, I’d be very focused on Philipstown and the St. Kevin’s lads. That won’t be compromised in any fashion.”

“For a long time I probably felt I couldn’t really coach against my own county,” he added, “but I don’t see it as me going in to plan someone’s downfall, I’m going in to help one team try to become a better set of players.

“It goes without saying, I’d be very friendly with a lot of the Louth players and have huge respect for them, as individuals and as players. What they do on an ongoing basis for the county is outstanding and what they did for me, as a manager, was outstanding.

“I played with Louth at every level for 20 years and I’ve managed them twice at U21 and once at senior (level).

“And, I think, there’s more to the competition than just one match in the first round. There are qualifiers and other games to play, too.

“In terms of Louth, and how I feel about them, my opinion of the players is something that can’t be changed, but I come up against these players at club level all the time.”

With the ‘club-only’ month of April on the horizon, Kelly denied that he has committed to taking two sessions per week with Wexford, as was believed. Regardless, he expects to meet the team management and, possibly, the players early this week.

Having faced the Yellowbellies thrice as a manager - winning on every occasion; twice with Louth and once as Westmeath boss - Kelly is familiar with the county’s “talent” and while they sit mid-table in Division Four with as many wins (three) as defeats, the former Newtown Blues player is confident that he can improve them in time for the Wee County’s visit.

All the same, the timing of his new position comes in the aftermath of his failure to secure an interview for the Louth U20 job, which has gone to Stabannon Parnells’ Aidan Shevlin.

It is believed that his nomination was not received in time, and this is expected to be confirmed at the next County Board meeting.

His championship record as a manager has produced three wins from 11 matches, all of which came during his time with Louth, while he departed Westmeath last summer, after one season.