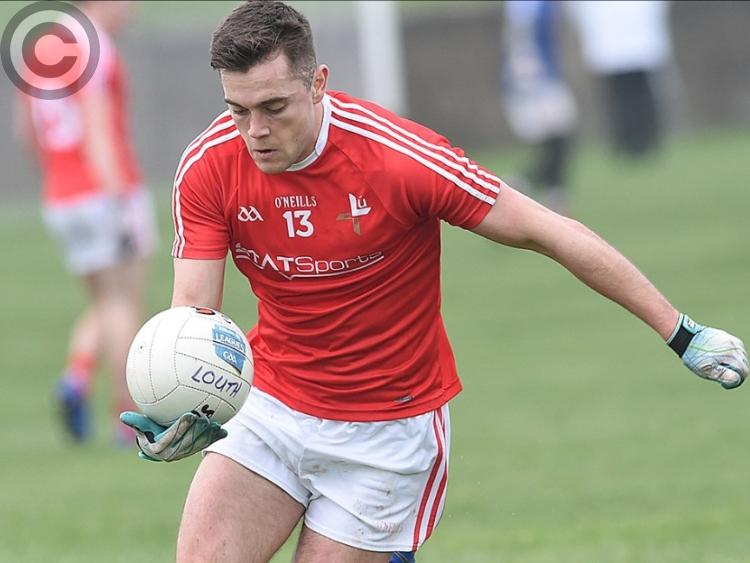 Andy McDonnell was in action for Louth against Carlow at Netwatch Cullen Park on Saturday evening. (Pic: Arthur Kinahan)

News from Carlow on Saturday – which is another way of saying I wasn’t at Dr Cullen Park – is that the free-count suggests Louth were lacking in discipline.

Or that the referee was maybe wearing multi-coloured glasses, like yellow, green and red in this case.

Louth, chasing two vital points in a bid to stay top of the National League’s Division Three, finished with thirteen on the field, Declan Byrne having been red-carded and Ciaran Downey shown a black.

That’s a throwback to the first half of the competition, the Reds coming  off the field with a full complement of players in only one of their four matches.

However, a question that can be asked with a degree of legitimacy is, how much of Saturday’s sin-binning can be laid of the door of frustration. Mr Kissane, the arbitrator, gave Carlow 23 frees, Louth a little over half that number, 12 to be exact.

That’s a stat that would suggest Louth were lucky to have had only two carded; but having listened to Colm Corrigan on the airwaves and spoken to this paper’s representative, Caoimhin Reilly, along with a few others filling the role of supporter, it would seem that Louth simply couldn’t do anything wrong in a tackle, however unintended.

Okay, so the two Cs wear the red jersey every so often, just as I did myself when spreading the word for public consumption.
But the figures give meaning to what they said. Neither, however, suggested Louth came anywhere close to repeating the heroics seen in the Sligo tie.

Whatever about the circumstances which brought it about, the defeat has put a huge dent in Louth’s hopes of making a quick return to Division Two.

It has also helped Carlow maintain a good run in meetings of the counties since making a major breakthrough in the 2011 championship.

It’s crowded at the top of the table with two series of matches remaining.

Louth next play Westmeath at home, and then Down at the splendid Pairc Esler, in Newry.

Maximum points would guarantee promotion – anything less might have Wayne Kierans’ men looking to others to do them a favour.