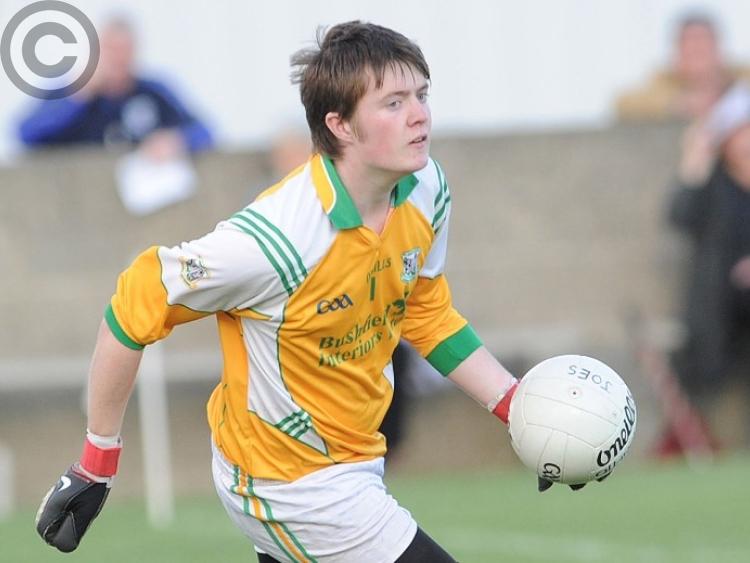 Carlow 'keeper Robert Sansom in action for St. Joseph's, the club who he played for in Louth prior to his transfer to Ballinabranna. (

Dromiskin’s Robert Sansom was probably the only Louth man happy with Carlow’s league victory over the Wee County on Saturday night.

A former St. Joseph’s and, indeed, Louth ’keeper, Sansom played his third match for Turlough O’Brien’s men in the 1-10 to 0-12 victory, having recently transferred his allegiance from his native to adopted county.

The 26-year-old works for Leinster GAA in Kildare, a job he took up having studied at IT Carlow, and completed a switch to Carlow club Ballinbranna last year, with whom he won an intermediate championship medal.

Though now playing between the posts for the Barrowsiders, locals know him as more of a scoring forward having been prolific at full-forward in his side’s title-winning exploits of 2018.

Such form led to him being called into the county panel as an attacker, before honesty got the better of him, with Carlow boss Turlough O’Brien restoring him to his more natural No. 1 berth.

“It was the same ‘aul’ story when I moved down; come here and tell a few lies, tell them you play out the field, so I was on the square for the club,” Sansom told The Democrat.

“I would have played outfield for the Joe’s a couple of times, but I suppose it was the first year where I was able to get a full pre-season in and train three nights a week, whereas with the Joe’s I’d only be there at weekends, and it worked out in the end.

“I actually got brought in with Carlow as a forward and I knew fairly early on that I wasn’t at that level. We were playing IT Carlow in a friendly one night, I played outfield in the first half and at half-time, Turlough said: ‘Robbie, you’re going in goals’. I haven’t looked back since…”

An O’Byrne Cup appearance preceded his National League debut against Offaly on the weekend before last and an impressive display there ensured he got the nod for the game he looked forward to most.

“It was always going to be interesting playing against Louth. It’s the one game I looked forward to all year.

“I targetted the Offaly game as the one I wanted to get in for and things just fell into place. I got my chance last week, unfortunately the result didn’t go our way, but I was lucky enough to hold on for tonight.

“I’d know a lot of the lads on the Louth team. I’d be very good friends with Tommy Durnin, I’ve known him since I was a child so there would have been the odd Snapchat (message) there with a bit of slagging and a few late night videos, he won’t mind me saying…

“It was great to see the boys and I wish Louth all the best, wouldn’t it be great if we could both go up and play them again next year?

“Growing up, I always wanted to play with Louth. I was in with them under (Aidan) O’Rourke and I was down here so it was hard to commit. With Ollie (McDonnell) with the juniors, I played a bit.

“In another life, I could have been out there on the opposite side. I just came down here expecting to get a degree, get a job and move back to Louth. But things aren’t that simple, are they?

“I’m very lucky because when I came down here I went to a great college and I ended up working in the college for a year. I ended up getting a job close to home, close to here… sure it’s home now,” he added.

A two-time minor championship winner with the Joe’s, Sansom is hopeful of a return to playing with the Cluskey Park side in the future, admitting that the decision to leave was a deeply difficult one to make.

However, given the logistics involved in his weekly commute from Carlow to Dromiskin, and back, a transfer, he felt, was the logical move.

“It was very hard when I was at college here, I was travelling down on Tuesday and Thursday nights, a lot of late nights where I wasn’t getting back here until 1am.

“Eventually I just ‘bit the bullet’ (and transferred out), but I’d love to go back and I still have high intentions of doing so.

“I put the request in and luckily the Joe’s were very accommodating and they understood. I was there a long time and they were very good to me.”